Finally arrested 32 years after he fled sentencing for unlawful sex with a minor, the director is ... a big hero? 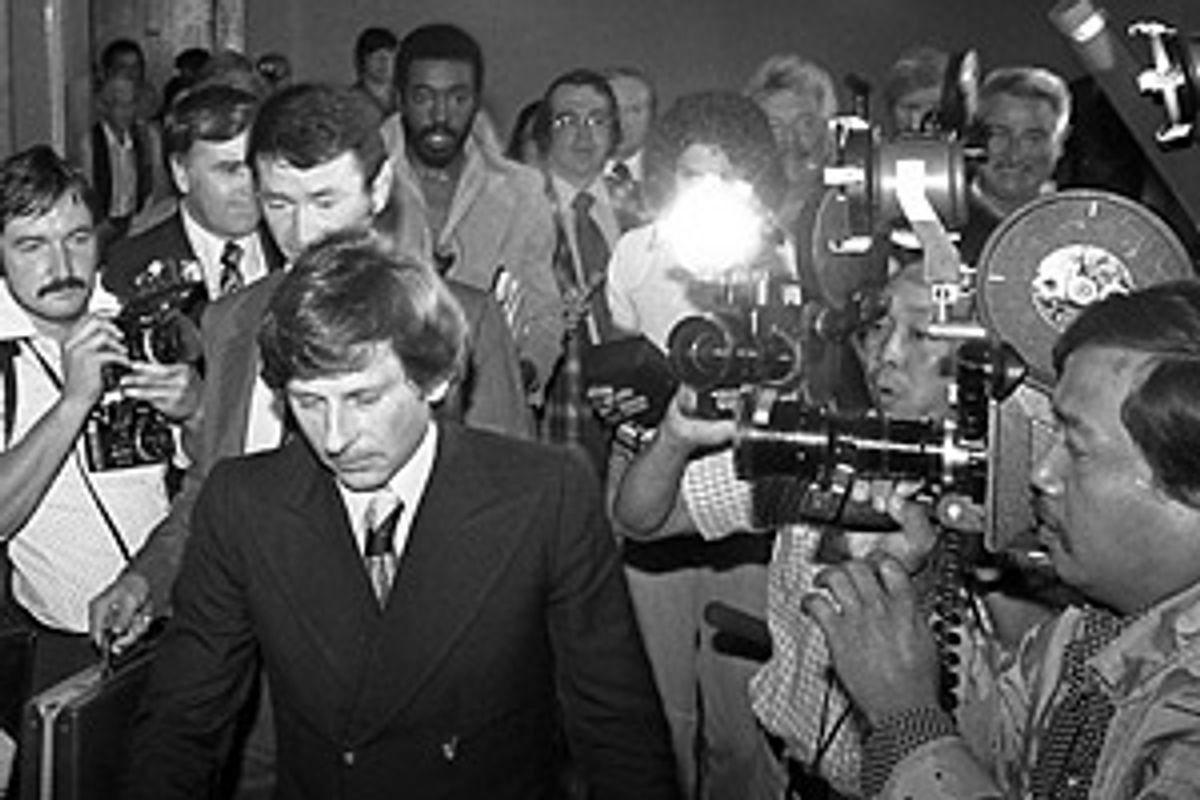 An image from the documentary "Roman Polanski: Wanted and Desired."
--

Roman Polanski raped a child. Let's just start right there, because that's the detail that tends to get neglected when we start discussing whether it was fair for the bail-jumping director to be arrested at age 76, after 32 years in "exile" (which in this case means owning multiple homes in Europe, continuing to work as a director, marrying and fathering two children, even winning an Oscar, but never -- poor baby -- being able to return to the U.S.). Let's keep in mind that Roman Polanski gave a 13-year-old girl a Quaalude and champagne, then raped her, before we start discussing whether the victim looked older than her 13 years, or that she now says she'd rather not see him prosecuted because she can't stand the media attention. Before we discuss how awesome his movies are or what the now-deceased judge did wrong at his trial, let's take a moment to recall that according to the victim's grand jury testimony, Roman Polanski instructed her to get into a jacuzzi naked, refused to take her home when she begged to go, began kissing her even though she said no and asked him to stop; performed cunnilingus on her as she said no and asked him to stop; put his penis in her vagina as she said no and asked him to stop; asked if he could penetrate her anally, to which she replied, "No," then went ahead and did it anyway, until he had an orgasm.

Can we do that? Can we take a moment to think about all that, and about the fact that Polanski pled guilty to unlawful sex with a minor, before we start talking about what a victim he is? Because that would be great, and not nearly enough people seem to be doing it.

The French press, for instance (at least according to the British press) is describing Polanski "as the victim of a money-grabbing American mother and a publicity-hungry Californian judge." Joan Z. Shore at the Huffington Post, who once met Polanski and "was utterly charmed by [his] sobriety and intelligence," also seems to believe that a child with an unpleasant stage mother could not possibly have been raped: "The 13-year old model 'seduced' by Polanski had been thrust onto him by her mother, who wanted her in the movies." Oh, well, then! If her mom put her into that situation, that makes it much better! Shore continues: "The girl was just a few weeks short of her 14th birthday, which was the age of consent in California. (It's probably 13 by now!) Polanski was demonized by the press, convicted, and managed to flee, fearing a heavy sentence."

Wow, OK, let's break that down. First, as blogger Jeff Fecke says, "Fun fact: the age of consent in 1977 in California was 16. It's now 18. But of course, the age of consent isn't like horseshoes or global thermonuclear war; close doesn't count. Even if the age of consent had been 14, the girl wasn't 14." Also, even if the girl had been old enough to consent, she testified that she did not consent. There's that. Though of course everyone makes a bigger deal of her age than her testimony that she did not consent, because if she'd been 18 and kept saying no while he kissed her, licked her, screwed her and sodomized her, this would almost certainly be a whole different story -- most likely one about her past sexual experiences and drug and alcohol use, about her desire to be famous, about what she was wearing, about how easy it would be for Roman Polanski to get consensual sex, so hey, why would he need to rape anyone? It would quite possibly be a story about a wealthy and famous director who pled not guilty to sexual assault, was acquitted on "she wanted it" grounds, and continued to live and work happily in the U.S. Which is to say that 30 years on, it would not be a story at all. So it's much safer to focus on the victim's age removing any legal question of consent than to get tied up in that thorny "he said, she said" stuff about her begging Polanski to stop and being terrified of him.

Second, Polanski was "demonized by the press" because he raped a child, and was convicted because he pled guilty. He "feared heavy sentencing" because drugging and raping a child is generally frowned upon by the legal system. Shore really wants us to pity him because of these things? (And, I am not making this up, boycott the entire country of Switzerland for arresting him.)

As ludicrous as Shore's post is, I have to agree with Fecke that my favorite Polanski apologist is the Washington Post's Anne Applebaum, who finds it "bizarre" that anyone is still pursuing this case. And who also, by the by, failed to disclose the tiny, inconsequential detail that her husband, Polish foreign minister Radoslaw Sikorski, is actively pressuring U.S. authorities to drop the case.

There is evidence of judicial misconduct in the original trial. There is evidence that Polanski did not know her real age. Polanski, who panicked and fled the U.S. during that trial, has been pursued by this case for 30 years, during which time he has never returned to America, has never returned to the United Kingdom., has avoided many other countries, and has never been convicted of anything else. He did commit a crime, but he has paid for the crime in many, many ways: In notoriety, in lawyers' fees, in professional stigma. He could not return to Los Angeles to receive his recent Oscar. He cannot visit Hollywood to direct or cast a film.

But hey, he wasn't allowed to pick up his Oscar in person! For the love of all that's holy, hasn't the man suffered enough?

Granted, Roman Polanski has indeed suffered a great deal in his life, which is where Applebaum takes her line of argument next:

He can be blamed, it is true, for his original, panicky decision to flee. But for this decision I see mitigating circumstances, not least an understandable fear of irrational punishment. Polanski's mother died in Auschwitz. His father survived Mauthausen. He himself survived the Krakow ghetto, and later emigrated from communist Poland.

Surviving the Holocaust certainly could lead to an "understandable fear of irrational punishment," but being sentenced for pleading guilty to child rape is basically the definition of rational punishment. Applebaum then points out that Polanski was a suspect in the murder of his pregnant wife, Sharon Tate, a crime actually committed by the Manson family -- but again, that was the unfortunate consequence of a perfectly rational justice system. Most murdered pregnant women were killed by husbands or boyfriends, so that suspicion was neither personal nor unwarranted. This isn't Kafkaesque stuff.

But what of the now-45-year-old victim, who received a settlement from Polanski in a civil case, saying she'd like to see the charges dropped? Shouldn't we be honoring her wishes above all else?

In a word, no. At least, not entirely. I happen to believe we should honor her desire not to be the subject of a media circus, which is why I haven't named her here, even though she chose to make her identity public long ago. But as for dropping the charges, Fecke said it quite well: "I understand the victim's feelings on this. And I sympathize, I do. But for good or ill, the justice system doesn't work on behalf of victims; it works on behalf of justice."

It works on behalf of the people, in fact -- the people whose laws in every state make it clear that both child rape and fleeing prosecution are serious crimes. The point is not to keep 76-year-old Polanski off the streets or help his victim feel safe. The point is that drugging and raping a child, then leaving the country before you can be sentenced for it, is behavior our society should not -- and at least in theory, does not -- tolerate, no matter how famous, wealthy or well-connected you are, no matter how old you were when you finally got caught, no matter what your victim says about it now, no matter how mature she looked at 13, no matter how pushy her mother was, and no matter how many really swell movies you've made.

Roman Polanski raped a child. No one, not even him, disputes that. Regardless of whatever legal misconduct might have gone on during his trial, the man admitted to unlawful sex with a minor. But the Polanski apologism we're seeing now has been heating up since "Roman Polanski: Wanted and Desired," the 2008 documentary about Polanski's fight to get the conviction dismissed. Writing in Salon, Bill Wyman criticized the documentary's whitewashing of  Polanksi's crimes last February, after Superior Court Judge Peter Espinoza ruled that if the director wanted to challenge the conviction, he'd need to turn himself in to U.S. authorities and let the justice system sort it out. "Fugitives don't get to dictate the terms of their case ... Polanski deserves to have any potential legal folderol investigated, of course. But the fact that Espinoza had to state the obvious is testimony to the ways in which the documentary, and much of the media coverage the director has received in recent months, are bizarrely skewed."

The reporting on Polanski's arrest has been every bit as "bizarrely skewed," if not more so. Roman Polanski may be a great director, an old man, a husband, a father, a friend to many powerful people, and even the target of some questionable legal shenanigans. He may very well be no threat to society at this point. He may even be a good person on balance, whatever that means. But none of that changes the basic, undisputed fact: Roman Polanski raped a child. And rushing past that point to focus on the reasons why we should forgive him, pity him, respect him, admire him, support him, whatever, is absolutely twisted.