The end of the Pax Americana?

Obama has the chance to end our Cold War hangover, and start an era where the U.S. is not the sole global policeman 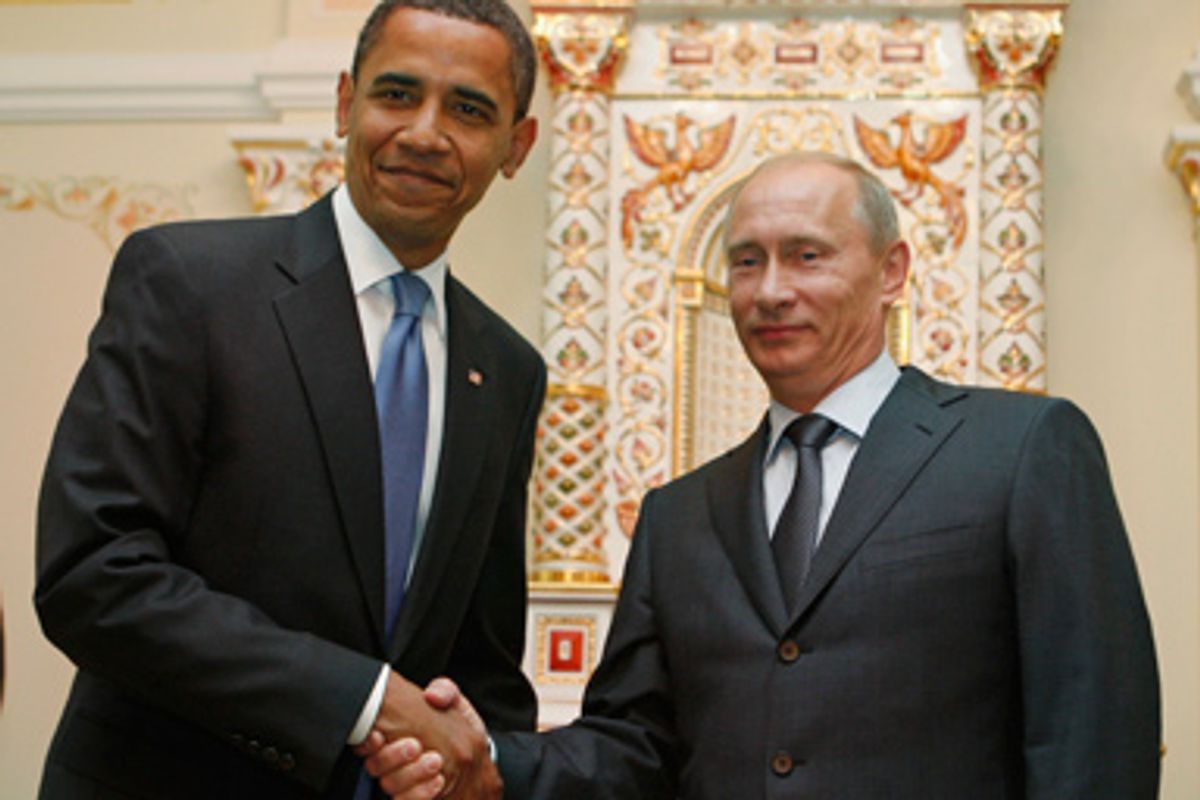 While the economic crisis continues to overshadow other topics, world politics is undergoing rapid and dramatic changes. In areas from national security policy to trade, the Obama administration has repudiated Bush-era precedents significantly, if not rapidly enough for some critics on the left. The pressures on the administration to continue in the path followed by U.S. administrations since the fall of the Berlin Wall are intense, particularly in light of the victory of the hard-liners in Iran and new revelations about Iran's nuclear program. Even so, President Obama in partnership with other world leaders has a genuine opportunity to bring the post-Cold War era to a definitive end and to preside over the greatest reorganization of global politics since the end of World War II.

During World War II, Franklin Roosevelt hoped that the postwar world could be policed by a great power concert or alliance, made up initially of the U.S., Britain and the Soviet Union, along with Nationalist China. Corresponding to FDR's concert-of-power security system would be new global economic institutions that would go beyond setting rules to promoting Keynesian demand management on a global scale in the interest of sustained and shared global growth.

During the Cold War, the U.S. abandoned those plans and improvised a strategy of U.S. hegemony or primacy. America's Cold War hegemony strategy rested on two pillars: dual containment and unilateral free trade. Dual containment meant that the U.S. contained both the Soviet Union and communist China and its conquered, demilitarized allies West Germany and Japan, which could not be allowed to reemerge as independent military powers rather than U.S. satellites. To keep West Germany and Japan as satisfied client-states, the U.S. promised not only to protect their vital security interests but also to practice unilateral free trade, opening its markets to their exports. Throughout the Cold War and beyond, the U.S. turned a blind eye to the aggressive trade policies of its allies, particularly Japan, South Korea, Taiwan and other Asian client-states. They were allowed to protect their domestic markets and subsidize their industries, while enjoying access to American consumers. For half a century the strategic elite in both parties has been willing to sacrifice U.S. industries in order to bribe the other major industrial countries into staying within the U.S. alliance system.

When the Cold War ended, the U.S. could have promoted a version of the FDR-Keynes world order: a great-power concert and international macroeconomic coordination in the interest of sustainable growth. Instead, more out of inertia than by design, the Clinton and George W. Bush administrations sought to keep a version of the Cold War system going indefinitely. Germany, now reunited, and Japan were still U.S. client-states, while Russia and China, though no longer Marxist-Leninist, were still treated as actual or potential threats. The collapse of Soviet power allowed the U.S. to add the Middle East to Europe and East Asia as one of its hegemonic spheres of influence.

Like America's security strategy, America's post-Cold War economic strategy recycled the Cold War policy of unilateral market access. Just as Japan and West Germany had been told to make cars, not Zeros and Panzers, so China was invited to put its energies into producing for the U.S. market instead of building up a rival military machine.

In his 2002 West Point address, George W. Bush made the bargain explicit: "Competition between great nations is inevitable, but armed conflict in our world is not ... America has, and intends to keep, military strengths beyond challenge ... making the destabilizing arms races of other eras pointless, and limiting rivalries to trade and other pursuits of peace."

Defenders of U.S. hegemony, a group that includes most of the members of the Democratic as well as Republican foreign policy elites, argue that American primacy is necessary to avert what I think of as the Two Spirals -- the spiral of arms races and the spiral of protectionism. According to what is called "hegemonic stability theory," both world peace and world trade depend on a single overwhelmingly powerful country that provides other nations with the public goods of security, market access and a global reserve currency. If the U.S. were unwilling to sacrifice its soldiers and treasure on behalf of the interests of other nations as well as its own, then the other great powers -- in particular, Germany and Russia in Europe and Japan and China in Asia -- would arm themselves to defend their interests, and mutual suspicion might lead to arms races and regional or global war. And if the U.S. were not willing to sacrifice its own industries to export-oriented countries, other nations might abandon the idea of a global economy and the scramble to lock up markets and raw materials might also lead to regional or global war. The geopolitical parade of horribles invoked by America's foreign-policy establishment always leads back to the same grand marshal -- the next world war, Dubyah Dubyah Three.

The Pax Americana strategy requires its supporters to exaggerate the power and malevolence of the designated enemies of the Pax Americana: Russia, China and Iran. The exaggeration of threats is accomplished in two ways. First, defensive military measures that these nations undertake to deter U.S. attack -- Russia's attempt to intimidate Georgia, China's development of "anti-access" capabilities to reduce the ability of the U.S. to defeat it in a war over Taiwan, and Iran's not-so-disguised attempt to obtain nuclear weapons to deter conventional U.S. or Israeli attacks -- are portrayed by American policymakers and pundits as aggressive. According to this Orwellian double standard, U.S./NATO encirclement of post-Soviet Russia on its borders is alleged to be "defensive," while feeble protest gestures like Russian military flights to Cuba or the bullying of Ukraine are defined as "aggressive" actions that threaten a new Cold War. The knight with the best sword naturally wants to ban the use of shields and armor.

In addition to defining the defensive reactions of Russia, China and Iran to U.S. provocations in their own neighborhoods as diabolical schemes for regional or global conquest, some champions of the Pax Americana have pretended to identify a new global ideological struggle against an "axis of autocracy" or "authoritarian capitalism." In reality, of course, three countries could hardly be less similar to one another than Russia, China and Iran, which seek to benefit from the existing world system on their own terms rather than overthrow it.

In my experience, most members of the U.S. foreign policy elite sincerely believe that the alternative to perpetual U.S. world domination is chaos and war. The benefit to members of the elite is not so much economic as psychic -- it's nice to be a top dog in the top-dog pack. But even though our leaders tend to be persuaded that American hegemony averts the twin spirals of great-power conflict and trade war, they find it challenging to explain the strategy to the public. Consider the following imaginary dialogue about U.S. national security:

Citizen: "Why did our young men and women have to die in Iraq?"

Statesman: "Saddam's Iraq was not a threat to the U.S. itself, but it threatened U.S. hegemony in the Persian Gulf, which makes possible the American provision of energy security to Japan and Germany, which absent that American security guarantee might rearm and trigger regional and global arms races that could lead to World War III."

Consider, as well, this imaginary dialogue about U.S. trade policy:

Citizen: "When other countries try to wipe out our industries by cheating, why can't we retaliate?"

Statesman: "U.S. retaliation against foreign mercantilism, even if it were justified on the merits, might lead the cheating countries to cheat even more, thereby triggering a spiral of economic warfare that might cause a new Depression, which in turn might lead to World War III."

As the hypothetical citizen's response suggests, an honest explanation of the real rationale for U.S. grand strategy -- sacrificing American soldiers and American industries in order to persuade Germany, Japan and now China to specialize as non-threatening civilian powers -- would be met with incredulity and anger by many if not most Americans. Our bipartisan foreign policy establishment therefore finds it necessary to come up with false answers to the questions of the American people.

Citizen: "Why did our young men and women have to die in Iraq?"

Statesman: "To prevent a mad dictator from bombing you and your family at home, either by giving bombs to terrorists or sending them on missiles across the oceans."

Citizen: "When other countries try to wipe out our industries by cheating, why can't we retaliate?"

Statesman: "Because all economists agree that free trade always benefits both sides and that protectionism would lead to unemployment and poverty for you and your family. If you question those assertions, you are an ignorant Neanderthal."

Even supporters of the hegemony strategy admit that it can't be described candidly to the public, for fear of a public backlash. In his book "The Case for Goliath," Michael Mandelbaum concedes that Americans "have never been asked to ratify their country's status as the principal supplier of international public goods, and if they were asked explicitly to do so, they would undoubtedly ask in turn whether the United States ought to contribute as much to providing them, and other countries as little, as was the case in the first decade of the 21st century." Mandelbaum concludes with the condescending statement that "the American role in the world may depend in part on Americans not scrutinizing it too closely."

It is too early to tell whether there is a real chance in Washington for an alternative to the Cold War Plus strategy of perpetually containing Russia and Germany, China and Japan, and Iran and Iraq that Democrats and Republicans alike have pursued since the Berlin Wall fell. But there are some encouraging signs.

The G-20 looks very much like a nascent concert of power. Its inclusive membership and flexibility might make it a de facto replacement for the rigid, outdated U.N. Security Council in the security realm. The coordination of their stimulus packages by the G-20 nations in the past year was a remarkable exercise in Keynesianism on a global scale. And the Obama administration, unlike its predecessor, has made it clear that the U.S. can no longer be the market of first resort for China and other export-oriented countries. The administration's tariffs on Chinese tires are a signal that the offer of unilateral market access is being reconsidered by the U.S.

While the brutality and militancy of the Iranian regime may foreclose a rapprochement, the Obama administration has backed away somewhat from the policy of encircling Russia by canceling NATO missile defense systems in Poland, whose purpose was to intimidate Russia, not Iran. And following a period of low-key military rivalries among the U.S. and China, Obama seems more interested in partnering with the world's most populous country than in provoking it into a needless arms race.

But there was a chance to move from confrontation to concert back in the early 1990s, as well. Let's hope that President Obama, unlike Presidents Clinton and Bush, will push for a genuine new world order rather than perpetual containment and perpetual cold war.