Without oversight, insurance companies will continue to exploit American consumers 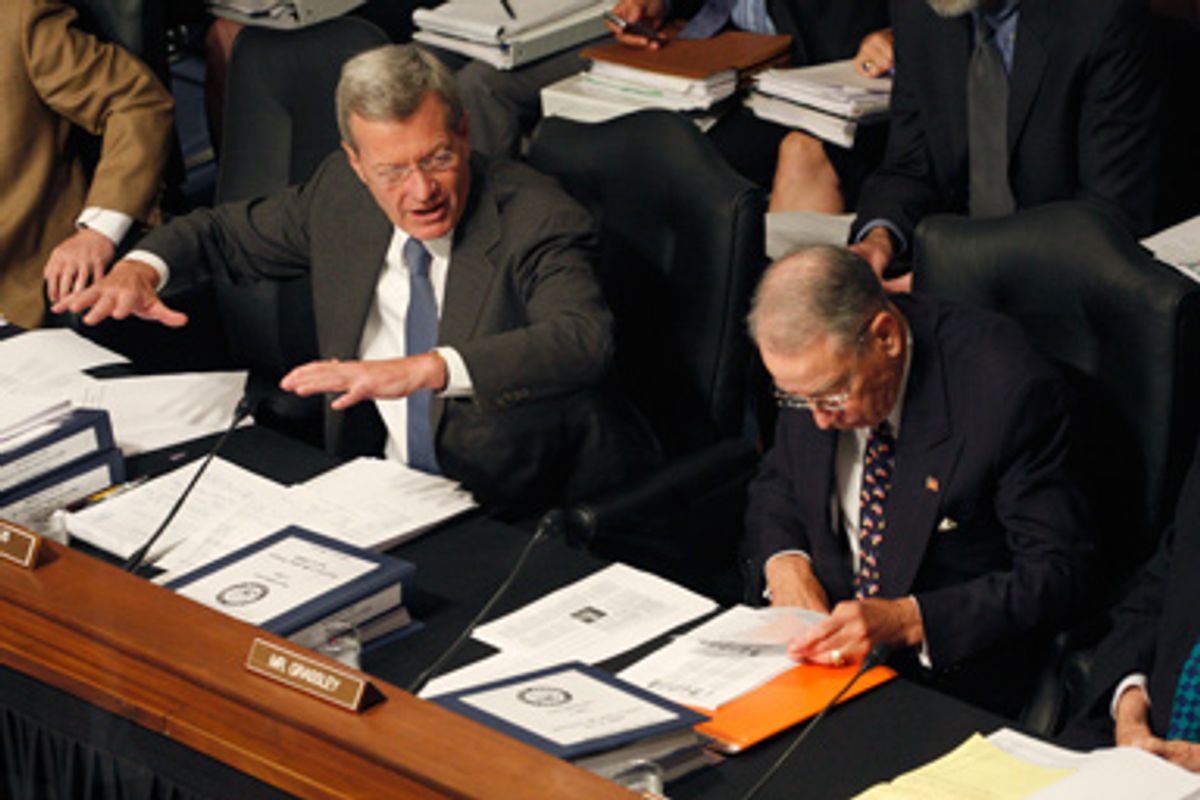 There are so many problems with the healthcare reform bill proposed by Senator Max Baucus (D-MT), chair of the Senate Finance Committee, it is little wonder that members of his committee have proposed more than 500 amendments to fix it. Unfortunately, some of the worst amendments that would make the bill even more of a gift to the health insurance industry are being offered by Republicans. If there is a God in heaven, they will not be adopted. But many other amendments are vital, including those that will make this key bill more like the better bills that have been reported out of four other Congressional committees. All of those bills call for the creation of a public insurance option, which is an absolutely critical element of reform. Without it, all of us who are not eligible for an existing government-run program, like the Medicare and VA programs, will be forced to buy coverage from the private insurance industry, which is dominated by a cartel of huge for-profit companies.

The adoption of an amendment to create a strong public option, supported by Senator Jay Rockefeller, D-W. Va., and many others on the committee, is certainly job one. But there are many additional fixes that are necessary, including other amendments being offered by Senator Rockefeller. They are so important I have sent a letter to Senator Baucus and the other members of the committee urging them to adopt the Rockefeller amendments that will require private insurance companies to be more honest and transparent in their dealings with consumers and more accountable to federal and state governments that must regulate them. As I note in the letter, without those amendments, insurance companies will be able to continue their most discriminatory practices without either transparency or real accountability. Here is my letter:

As a former health insurance company executive, I am very concerned about the lack of transparency and accountability in the health insurance industry. That is why I urge you to incorporate Senator Rockefeller’s Amendments #C12 and #C13 into the America’s Healthy Future Act (AHFA), in particular with regard to the need for airtight regulations to protect consumer interests.

As proposed, AHFA will allow insurers to continue many of their most discriminatory practices without either transparency or real accountability: cost-shifting to their most vulnerable members through benefit designs that serve the needs of Wall Street; and rationing of care based on arbitrary opinions about what care is needed. In addition, there is no accountability for insurance companies to provide affordable and comprehensive healthcare coverage. A requirement that everyone buy health insurance accompanied by subsidies for people with low incomes does not ensure that Americans will have affordable care. The explosive cost growth in Massachusetts after healthcare reform is a case in point. And, AHFA has no mechanisms to enforce the insurance regulations that are included.

In addition, AHFA designates the National Association of Insurance Commissioners (NAIC) to write key regulations. This is of great concern to me because this proposal delegates to the NAIC, a private organization, with rule-making authority that is generally reserved for an agency of the federal government. Any institution given the authority to define the rules that will determine health insurance coverage for millions of Americans must be completely independent of the insurance industry and have a demonstrated record of putting the concerns of consumers first. The institution must also have the will and the resources to carry out the rulemaking process in a transparent and unbiased manner, with opportunity for input from all interested parties at each stage of the process. Based on its traditional manner of conducting business, the NAIC fails to meet any of these standards. The NAIC does not operate independently of the insurance industry. In fact, the NAIC is a private corporation, funded, in large part, by the insurance industry itself. Without industry dollars, the NAIC would not operate as it does today. In addition, eight of the last 10 NAIC presidents, as well as numerous commissioners, have gone directly from their posts to industry positions, creating the distinct impression that leadership positions at NAIC are mere stepping stones to more lucrative careers in the insurance industry.

For all these reasons, as well as my inside knowledge of how easily insurance companies circumvent existing regulations, I support Senator Rockefeller’s Amendments #C12 and #C13 to AHFA, which will:

*Establish a federal role for private health insurance oversight and provide resources for the Department of Health and Human Services to hire expert staff to carry out these functions and coordinate with state regulators.

* Require health insurance plans to disclose clear, accurate, and timely information on their policies and practices to ensure that they do not circumvent new federal health insurance regulations.

* Add needed transparency requirements such as: establishing fair grievance and appeals procedures by health insurers; clarifying information for health professionals and freeing up time for patients by establishing transparency standards relating to reimbursement arrangements between health plans and providers; and requiring advance notice of plan changes so consumers get what they pay.

*Establish America’s Health Insurance Trust, a nonprofit, independent, consumer-driven organization that will evaluate and give ratings to all health insurance products offered through the National Health Insurance Exchange. Annual insurance product ratings will be based on factors such as affordability, adequacy, transparency, consumer satisfaction, provider satisfaction, and quality.

* Ensure that ombudsman offices in each state are open to consumers at all stages of the appeal process to allow for early intervention and increase the likelihood of successful appeals.

Thank you for your consideration.

Cc: All Members of the Senate Finance Committee

Wendell Potter is the former vice president for corporate communications at Cigna. He is now president of Business for Medicare for All and author of bestselling books "Deadly Spin" and "Nation on the Take."