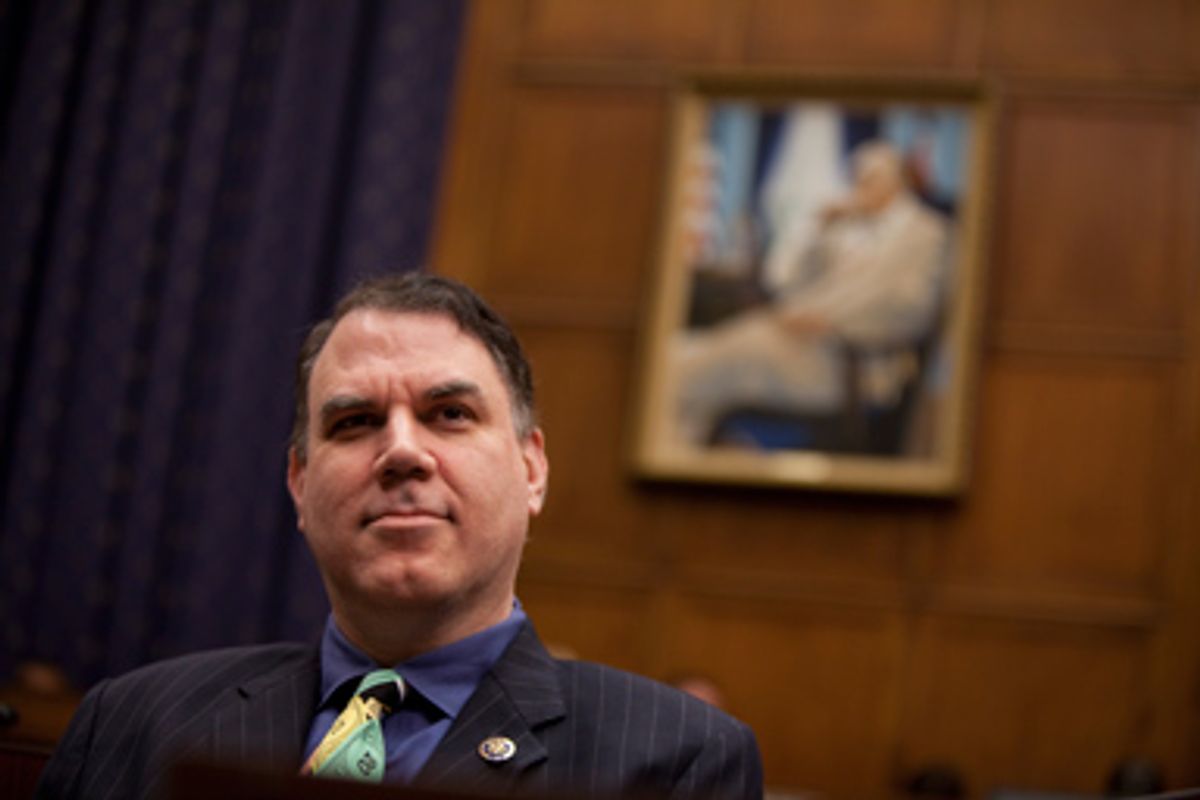 In a little less than a month, Rep Joe Wilson, R-S.C., went from virtual unknown to a man with real star power in the Republican Party. He's raised almost $2 million for his reelection campaign, been tapped for a fundraising appeal for the National Republican Congressional Committee and is now even heading out to stump for other candidates. And all it took for him to make that transition was a single moment, when he decided to interrupt President Obama's address to a joint session of Congress by shouting out "You lie!"

What Rep. Alan Grayson, D-Fla., did on the House floor Tuesday night may not be directly comparable to what Wilson did -- he said that the Republican healthcare plan is "don't get sick," but if you do, "die quickly," but he didn't interrupt the president in front of Congress and a prime-time national audience. Still, the reactions the two men have gotten from their respective party's bases have been strikingly similar. Grayson, who's serving his first term, probably won't get the kind of campaign invitations from high-profile colleagues that Wilson has -- but he has taken in more than $115,000 from just one fundraising Web site, ActBlue.com.

"We've had thousands of new contributors to our campaign, we've received 6,000 e-mails in less than 24 hours," Grayson told Salon. "People are urging us to make sure that we go ahead and take care of America's business, and they're applauding the fact that a congressman had the guts to say the truth and speak the truth to power."

It comes down to this: Whether they want to believe it or not, the passionate people on both sides of the political divide are more alike than they realize. Both sides believe the party that represents them isn't forceful enough, that it rolls over for its opposition, no matter how malicious that opposition might be. And when they find someone who's willing to say what they think needs saying -- even if that thing isn't really true, even if it involves yelling at the president or accusing opponents of wanting people to die quickly -- they can be energized pretty quickly. If that person is, like Wilson and Grayson, unwilling to give in when the other side starts howling, well, that only adds to their new aura.

Grayson certainly seems to realize this. In the face of demands for an apology from the House GOP, he went back to the floor on Wednesday and offered an apology -- not to the GOP, but "to the dead," people who've died for a lack of health insurance. "I apologize that we haven't voted sooner to end this holocaust in America," he said. On CNN, he called Republicans "foot-dragging, knuckle-dragging Neanderthals."

The congressman wasn't feeling any more conciliatory when he spoke to Salon Thursday afternoon, saying, "If anybody needs to apologize, the Republicans need to apologize, because since they started these obstructive tactics so many more thousands of Americans have died for lack of health insurance." And he stood by his original assertion, "Republicans want you to die quickly if you get sick."

When Salon pressed him, "Is what you said really true? Are they that evil?" Grayson responded, "Uh, yes. Yes. The answer is yes. They have done nothing to grapple with the real problems in people's lives ... Nothing that they have proposed would eliminate the daily tragedy, in fact the hourly tragedy, of people dying in America from not having health coverage. So the answer is yes, what I said is a proper characterization of what they have proposed or in their case not proposed."

Grayson's reelection staff is taking full advantage of the opportunity they've received as a result of their boss's outspokenness, too. On Friday, the campaign sent out a fundraising appeal that mocks House Republicans for their criticism of the congressman.

"Congressman Grayson's re-election campaign wishes to thank all of the Republican hypocrites who attacked Grayson," the e-mail says. "As soon as the Republican hissy fits began, contributions began to pour in to Grayson's campaign ... Rep. Tom Price (R-GA) demanded an apology. The Grayson re-election campaign would like to usher in a new era of bipartisanship by inviting Rep. Price to serve as the campaign's Finance Director. The campaign would also like to invite the chairman of the National Republican Congressional Committee, Pete Sessions (R-TX), to serve as Chairman of the Campaign's Fundraising Committee."

So far, the left has been loving all of this. It's no surprise, really. As Marin Cogan wrote for the New Republic just last week, during his short tenure in Congress, Grayson has become "something of a cult hero -- a darling of the liberal blogosphere." He's the kind of politician that group has been waiting for, and he proved it early on by hiring one well-known blogger, Matt Stoller. In fact, since even before Grayson was sworn in, he gave plenty of indication of what was to come.

A graduate of Harvard Law, Grayson spent the last few years before being elected working on lawsuits against contractors in Iraq and testifying before Congress about some of the waste and corruption he'd helped to unearth. (Coincidentally, back in 2005 I interviewed him about one suit he was working on.) Though he's worth at least $30 million, he drove an old Cadillac that sported bumper stickers like "Bush Lied, People Died." Then, not long after he took office, he got some attention for telling a writer for the Huffington Post, "Rush Limbaugh is a has-been hypocrite loser, who craves attention. His right-wing lunacy sounds like Mikhail Gorbachev, extolling the virtues of communism. Limbaugh actually was more lucid when he was a drug addict. If America ever did 1% of what he wanted us to do, then we'd all need pain killers."

But Grayson might end up paying a price for his willingness to be so outspoken, so freewheeling. Things like giving an interview to notorious conspiracy theorist and radio host Alex Jones, who's a 9/11 Truther, are likely to keep him out of the mainstream for a while. And he may not even last that long -- the Republicans are gunning for him.

Even if Grayson didn't have a tendency to cause controversy with his public statements, he'd be the kind of candidate any aspiring member of Congress hopes to run against. He's still a freshman, meaning he hasn't really accrued the usual advantages of incumbency and he'll be running in a year when history alone says Democrats should lose seats. Plus, his district leans Republican. It has been trending blue, and it did go for Obama last year, but in the 2010 midterms, Grayson won't get the boost Obama gave his fellow Democrats. Add in the fact that the congressman will now inspire Republicans from all over the country to donate to his opponent, and there should be some people out there salivating at the chance to take him on.

Problem is, though, that the GOP hasn't yet found the challenger it wants. Some people within the party say that's due to an embarrassment of riches -- too many good candidates to choose from, rather than a lack of them. That may be true, but by the time Republicans do settle on an opponent for Grayson, their choice will have lost out on all the money and attention he or she could have gotten from this controversy.

For now, though, Grayson's not worried; actually, he told Salon that he thinks he's helped the cause of healthcare reform.

"We're back on track," Grayson said. "The Republicans realize now that their stall tactics aren't going to work forever, because now we've changed the debate. For weeks, they've been saying, 'What's the rush?' Now it turns out people understand what the rush is: Another 122 dead Americans every single day. That's the rush. So I think this is going to push healthcare reform along, and God knows, I want it to happen soon."

Update: Grayson has now issued an apology for something he said on the House floor. Once again, though, it wasn't the Republicans he was apologizing to. This time he wrote to the Anti-Defamation League about a comment he made on Wednesday, "I apologize that we haven't voted sooner to end this holocaust in America."

Grayson, who is Jewish, said of those remarks, "In no way did I mean to minimize the Holocaust ... I regret the choice of words, and I will not repeat it.”