"The Invention of Lying" tells it straight

The not-so-awful truth is that Ricky Gervais is smart, funny and, yes, sexy 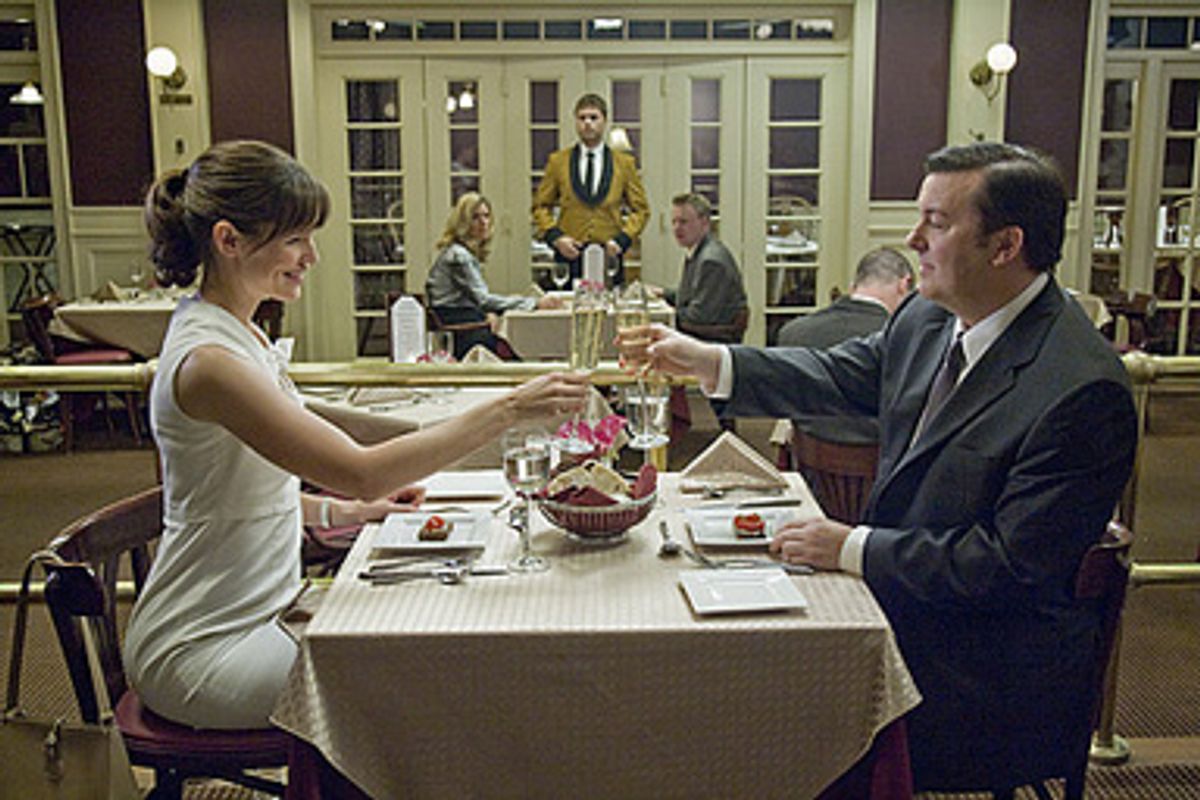 Ricky Gervais isn't leading-man material, and he knows it. In "The Invention of Lying," which he co-wrote and co-directed (with Matthew Robinson), he plays Mark Bellison, a polite, pudgy, low-level screenwriter who lives in an alternate world that, he explains, "has never evolved the ability to tell a lie." That means when Mark shows up for a first date with a woman whom he's long had a crush on, Anna McDoogles (Jennifer Garner), she gives him the once-over at the door and doesn't bother to hide her disappointment. They exchange some chit-chat in which she pointedly avoids being evasive, and when it's time for the two of them to head out, she announces brightly, "I don't find you attractive. Shall we?"

In "The Invention of Lying," people say the harshest, or just the most direct, things in the politest way possible. When Mark and Anna arrive at the modest restaurant he's chosen, she holds up the menu and mutters, as if her date were unable to hear, "Plastic." The waiter who comes to their table (played by the fine comic actor Martin Starr) greets them with the words "I'm embarrassed I still work here," uttered in the same mechanically cheerful voice he might use to say, "Hi, I'm Jared, and I'll be your server this evening." This is the world Mark is used to, and so while we see his spirit crumple a bit every time Anna reaffirms her lack of interest in him, Mark has no compunction about describing himself as a "loser." He accepts his lowly place in society's food chain.

That changes when he suddenly realizes that, because he lives in a world where everyone expects to hear the truth, no one blinks when they're confronted with a lie. And so he begins lying, not just to do things like get extra money out of his bank account, or reassert himself at his workplace after his dithery boss (Jeffrey Tambor) has fired him, but to generally smooth over minor everyday crises. Some bigger lies -- more accurately, instances in which he's forced to expound on things he knows absolutely nothing about -- will get him into trouble later on. But while "The Invention of Lying" never comes out and asserts that lying is good, it does poke a thoughtful, pointy stick at the idea that little white lies are part of what makes society work -- and part of what keeps the less-perfect among us (that is to say, everyone) from falling into a slough of despair over our shortcomings. And it's Gervais' guiding sensibility, combined with his assertive nonstar presence, that makes the picture work. "The Invention of Lying" isn't a rehash of the Jim Carrey vehicle "Liar, Liar." For one thing, Gervais isn't the exhausting presence that Jim Carrey is (or was). And honesty isn't presented as a pure and great virtue in "The Invention of Lying." Gervais, the mastermind behind the original British series "The Office," as well as HBO's "Extras," is more interested in subtext than he is in surface patterns, or, for that matter, in sanctimony. With "The Invention of Lying" Gervais explores a range of subjects that other filmmakers might consider nonsubjects. Those include the unspoken "truth" of advertising: When Mark flips on the TV, he sees a Coke ad featuring a bored-looking spokesperson who blandly urges his audience "to not stop buying Coke." Later we see another ad emblazoned on the side of a bus that reads, in a brazen admission of defeat, "Pepsi: When they don't have Coke." Even the basics of workplace politics -- obviously, a subject Gervais has thought about a lot -- get some of their meta-layers peeled back: One of Mark's snotty co-workers (played, superbly, by a slick Rob Lowe) offers a speech explaining in great detail why he never liked Mark: "I've always been threatened by you because there are things about you that I can't understand," he says, before hitting the clincher: "And I hate things I can't understand."

"The Invention of Lying" takes on even bigger subjects -- a portion of the movie is essentially a thumbnail sketch of all the things that continually hang us up about God and religion -- but even when it veers dangerously close to sentimentality, Gervais and Robinson artfully pull it back. The picture makes room for a number of non-big-name performers -- like Tambor and the writer/actor Louis C.K. -- that we don't get to see often enough. And it offers Garner, in particular, a generous platform: She's a marvelous comic actress, as she proved in the 2004 "13 Going on 30," and here, as a woman who speaks what she thinks is the truth even though she can't fathom what's inside her heart, her approach is both charming and deeply cutting. Maybe that's because there's something intrinsically, affectingly honest about Garner's face, with its deep-set eyes and quizzical smile. When she cuts Mark down -- as she does, repeatedly and unself-consciously, for his somewhat portly build or his lack of earning power -- she says it like she means it. It almost hurts to laugh, and yet you do it anyway.

Gervais presents himself, quite happily, as the butt of every joke, and you could call his willingness to turn the other cheek -- no, make that both cheeks -- just another kind of self-aggrandizement. But I don't think that's what Gervais is about. While to some extent all comics, as the critic Robert Warshow once said of Chaplin, make the "Love me" plea, Gervais also has a flintier side -- while it might be nice to be loved, in the end, he doesn't much care if you love him or not. He may come off as anxious to please, with his scrubbed-clean, well-groomed choirboy look, but he'll go only so far before he says, "Sod it." In the midst of a line, or with an eyebrow raised in exasperation, he can capture the moment when self-doubt hardens, out of necessity, into self-confidence.

Gervais doesn't have movie-star good looks; it's his line delivery that has sex appeal. Backed into a seemingly hopeless predicament, Mark tries to wriggle out with a desperation that's almost childlike: "I could get the next plane to Namibia," he offers, before adding needlessly, "No one knows me there." It's the urgency of the unnecessary addendum that actually makes the line funny, and that's the subtle territory that Gervais works so brilliantly. He gave a terrific, and sorely underappreciated, performance in last year's romantic comedy "Ghost Town." The reality is that it's big male stars who open movies these days: Even in 2009, unimaginative studio executives can barely bring themselves to look beyond Tom Cruise and Nicolas Cage as their first-draft picks (and women don't stand a chance -- the accepted wisdom is that there's no actress who can open a movie). There's no hope that Gervais' performance in "The Invention of Lying" will open up new hope for a different kind of leading man -- and that's what makes his resoluteness so great. Gervais, like all comic performers, must want us to love him. And maybe what we love most about him is the fact that he knows when to say, "Sod it."

Movies Ricky Gervais The Invention Of Lying The Office