President Obama's trip to Copenhagen didn't secure the games, so his opponents are cheering 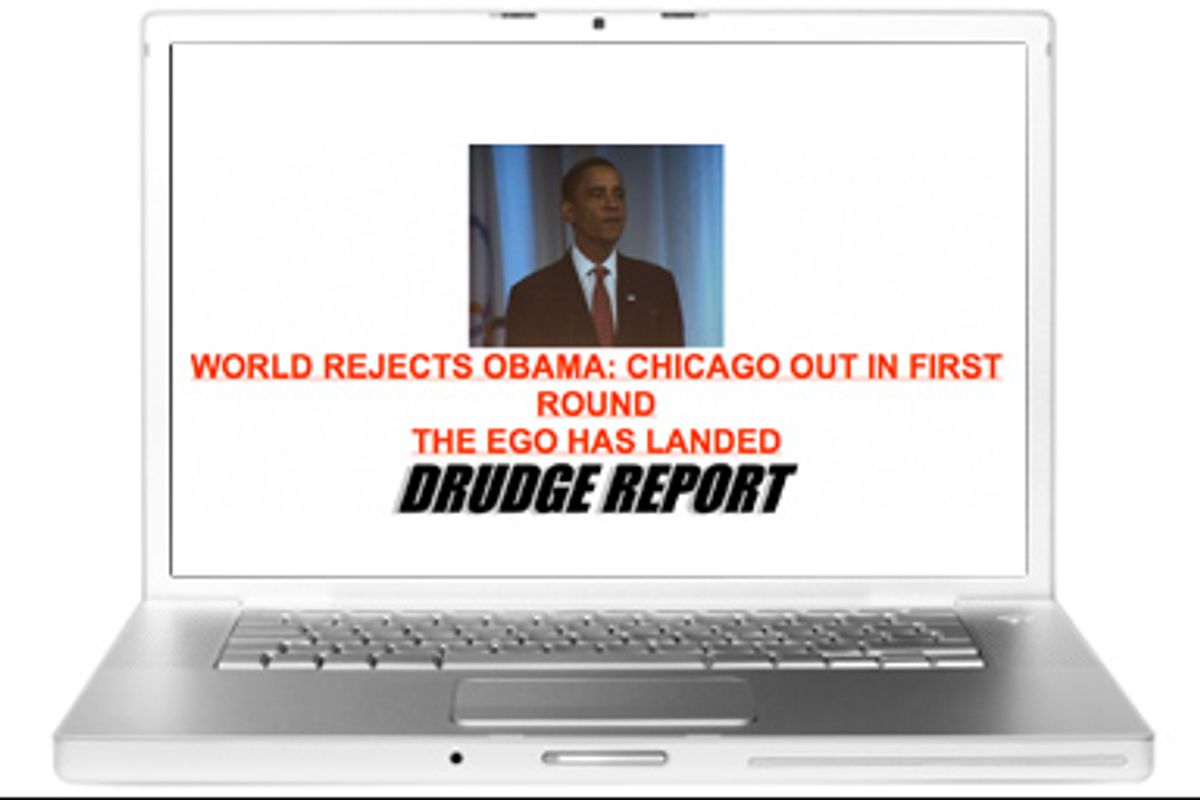 It's not often that conservatives celebrate the U.S. losing out to countries like Brazil and Spain, especially not when the loss involves a prominent event like the Summer Olympics. But when the International Olympic Committee eliminated Chicago as a potential host for the 2016 games in the first round of voting on Friday, the right broke out the champagne.

Chicago's attempt to secure the Olympics had become a partisan fight with the entrance of President Obama into his adopted hometown's efforts. Obama had flown to Copenhagen, where the vote was held, in order to lobby for Chicago, and from the moment of the announcement he'd do so, his opponents had suddenly turned into die-hard foes of the idea of having the U.S. play host to the 2016 Summer Olympics. It had been a crusade for the Drudge Report all week, and people like Glenn Beck and Michelle Malkin had happily joined in.

So when news of Chicago's loss came in, the response was swift, and joyful. Drudge's banner headline (screenshot above) read, "World rejects Obama: Chicago out in first round. The ego has landed." On the Weekly Standard's blog, John McCormack wrote of the news, "Cheers erupt at WEEKLY STANDARD world headquarters. " (The sentence was later removed from his post.) RedState's Erick Erickson wrote:

I thought the world would love us more now that Bush was gone.

I thought if we whored ourselves out to our enemies, great things would happen.

So Obama’s pimped us to every two bit thug and dictator in the world, made promises to half the Olympic committee, and they did not even kiss him.

So much for improving America’s standing in the world, Barry O.

A persistent theme in the taunts has been the suggestion that if Obama can't bring home the Olympics, he won't be able to rein in Iran, either. At the Corner, one of the National Review's blogs, John J. Miller wrote, "If he can't work his personal magic with the Olympians, why does he expect it to work with the Iranians?" Miller's colleague Ramesh Ponnuru quipped, "I'm sure that Obama will be a lot more persuasive with the Iranians."

Miller was on a similar wavelength with another poster at the Corner, Jonah Goldberg. At nearly the same time, the two joked that the IOC must be racist for voting Chicago out, mocking claims that opposition to Obama is motivated in part by race. "Frankly I am stunned that all my colleagues can do is score cheap political points against Obama's failed effort to win the Olympics for the United States. Where is the outrage at the IOC's transparent racism?" Goldberg wrote.

There is at least one veteran Republican operative out there asking his ideological allies not to celebrate a U.S. defeat, though. On Twitter, Scott Stanzel, who served as press secretary on President George W. Bush's reelection campaign and as a deputy press secretary in his White House, said, "Note to GOP officials/consultants -- resist the temptation to pile on about Chicago losing the Olympic bid just because Obama made the pitch."