"Whip It" wobbles, but it doesn't fall down

With her directorial debut, Drew Barrymore gets by on a skate and a smile 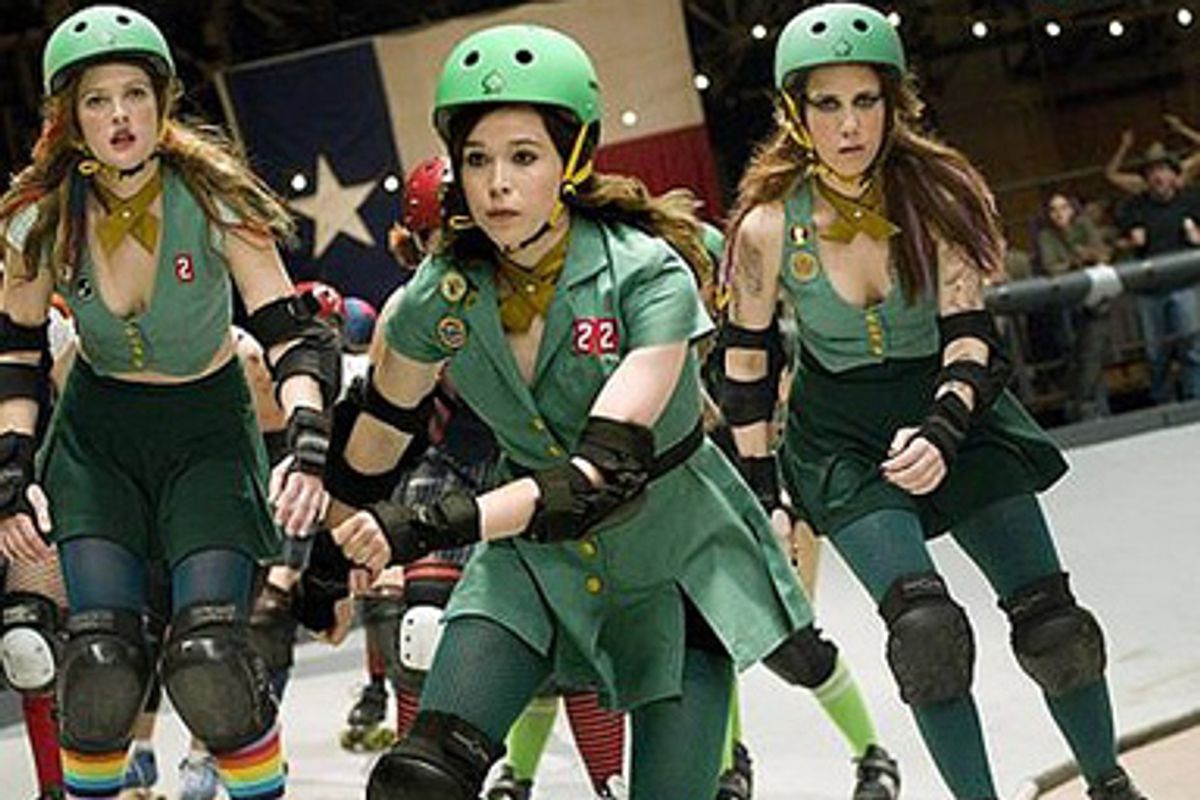 Sometimes a movie gets most of its appeal not from its structure or craftsmanship or even, necessarily, from its performances. Drew Barrymore's directorial debut, "Whip It" -- in which Ellen Page plays a frustrated teenager from a small Texas town who finds her niche with an Austin roller-derby team -- isn't a particularly solid piece of work: Barrymore doesn't yet know how to use dramatic tension to hold the story together. In fact, the story barely holds together at all. It's elusive and noodly, as if Barrymore (working with screenwriter and roller-derby vet Shauna Cross, adapting her own novel) could never quite be sure which direction she wanted to head in. It's a beginning roller-skater's movie, with arms and legs going every which way.

But "Whip It" has such a sweet spirit that it's easy enough to let its flaws sail by. And it captures the yearning often felt by young people who feel trapped in the town (or even the city) in which they've grown up: You may love your parents and friends very dearly and still feel a gnawing desire to be in a place where cool things are happening -- in other words, anywhere but home.

That's the vague dissatisfaction Page's character, 17-year-old Bliss Cavendar, is feeling. Her mother, Brooke (Marcia Gay Harden), is a mail carrier who can't quite let go of her past as a beauty-pageant winner in the truck-stop town where she and her family still live. Brooke tries to foist her own wishes and fantasies onto Bliss, forcing her to enter contests that make Bliss feel displaced and awkward. Brooke's big dream is that Bliss will win the crown in the local Miss Bluebonnet pageant. Her father, Earl (Daniel Stern), looks the other way; he cares about Bliss, but he knows how strong-willed his wife is and prefers not to cross her.

Bliss divides her time between school and her part-time waitressing job at a greasy spoon known as the Oink Joint. But one day, with her best friend Pash (Alia Shawkat) in tow, she sneaks off to Austin -- a place where cool things are definitely happening -- and falls under the brash, noisy, elbow-banging, knee-bashing spell of roller derby. Or, more significantly, she finds herself wowed by the women known as the Hurl Scouts: They cheerfully lose nearly every game and still manage to have a great time.

Bliss digs out her old skates (she acknowledges, with some embarrassment, that they have Barbie on them), lies about her age (the league requires all players to be at least 21) and manages to get herself on the team, thereby entering a sisterhood made up of women with great, tough-grrl names: There's Maggie Mayhem (Kristen Wiig), Rosa Sparks (Eve), Bloody Holly (Zoë Bell) and the accident-prone Smashley Simpson (Barrymore). Bliss, it turns out, is a natural on wheels -- she christens herself Babe Ruthless -- and immediately attracts the hostility of a vicious skater on a rival team, Iron Maven (Juliette Lewis).

Barrymore tries to pack a lot in here: There's the mother-daughter conflict, and a meandering love story involving the skinny, somewhat charmless rocker-dude Bliss falls for. (He's played by the unfortunately named singer-songwriter Landon Pigg.) Barrymore clearly wants to be generous toward her ensemble of actors, which means that some of the most appealing performers here simply don't get enough to do. Sadly, that's true of Bell, the former stuntwoman with killer charm who so memorably graced the hood of a Dodge Challenger in "Death Proof," Quentin Tarantino's half of the double-feature "Grindhouse."

But Barrymore's actors are, at least, having a good time, and their enthusiasm shows. Wiig is a terrific comic actress, with highly idiosyncratic timing, but in this picture, as in the recent "Extract," she proves that she can do more than play amusing oddballs: She shows glimmers of vulnerability beneath her twitchy, plainspoken demeanor. And Page is a lovely, surprisingly understated presence here. She doesn't just recycle the precocious-wiseacre character she perfected in "Juno." She and Harden, in particular, have a fine-grained rapport -- together, they keep the mother-daughter plot thread from becoming mundane.

Barrymore doesn't do so well in terms of overseeing the movie's action sequences. They're a bit muddled, visually: Even though one of the characters takes care to explain the rules of the sport, it's sometimes hard to tell who's coming from where, or who's winning and why. And yet some of the movie's early skating sequences -- particularly the one in which Bliss suddenly realizes that she's found something she's pretty good at -- capture what it's like to feel you're flying on wheels. "Whip It" may be unfocused and sprawling, but it's infectiously cheerful, too. In Drew Barrymore's world, there may be spills and scraped knees, but nothing can stop her from getting back on her feet with a smile.