Who are "the deciders"?

It's upside-down for political leaders to defer to military decisions 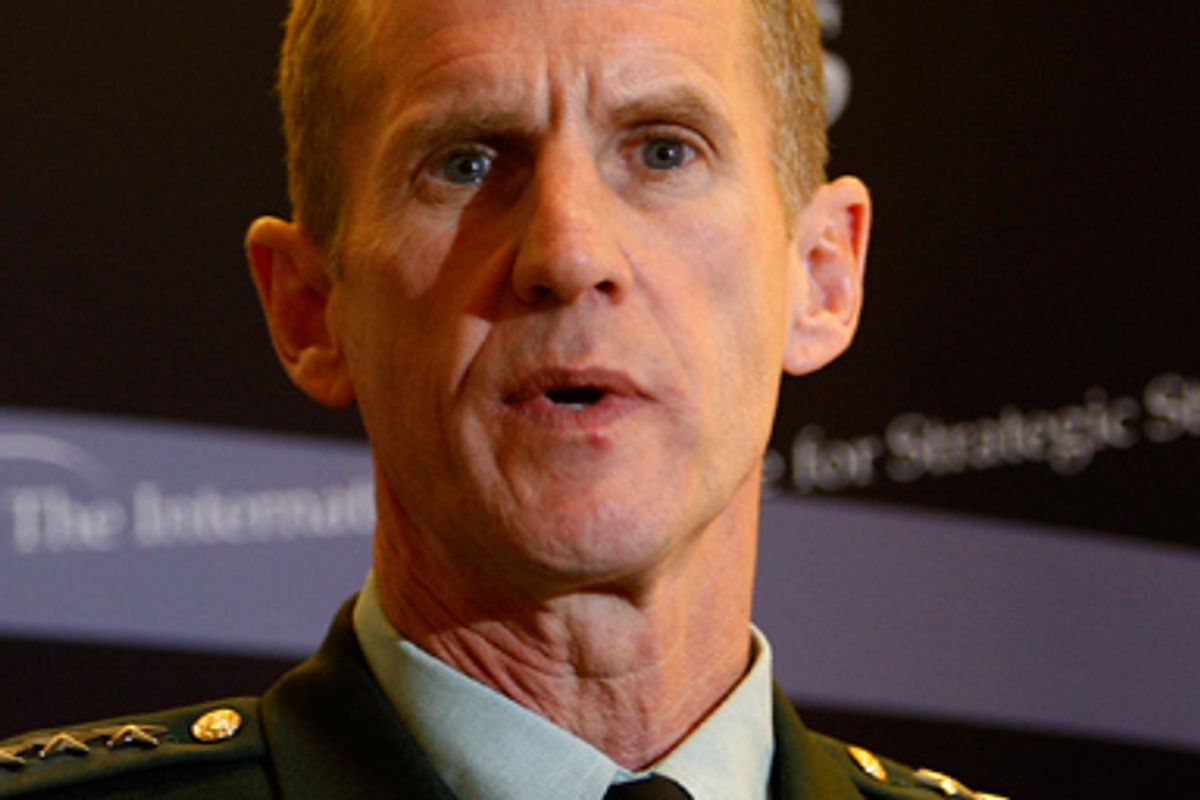 The war in Afghanistan poses two important questions: What should be done and who should be "the deciders"?

Congressional Republicans say the answer to the first query is military escalation. But according to polls, most Americans disagree. At the same time, many experts wonder "whether or not we know what we're doing," as President George W. Bush's former deputy national security advisor said last week.

One thing's for sure: The U.S. commander in Afghanistan, Gen. Stanley McChrystal, says he wants more troops. His new memo calling for a bigger Afghanistan deployment prompted President Obama to begin carefully considering different ways forward -- and Washington to hammer the White House for entertaining any alternative to McChrystal's request.

Republicans lambasted Obama for letting "political motivations ... override the needs of our commanders," as Sen. Kit Bond, R-Mo., said. Likewise, the Washington Post insisted that Obama’s failure to promptly back McChrystal's surge proposal could "dishonor" America, while the New York Times said no matter what the president wants, "It will be very hard to say no to General McChrystal."

The coordinated assault sharpens that question about who "the deciders" should be -- elected officials or the military?

The Washington establishment clearly believes the latter, and that's no surprise. The war-mongering political class has called for presidential and congressional deference to military demands since Hollywood movies and anti-communist ideologues began countering the public's "Vietnam Syndrome" by blaming that quagmire in Southeast Asia on elected officials. In the purest articulation of the argument, Ronald Reagan asserted in 1980 that Vietnam was lost not because of flaws in mission or strategy, but because politicians allegedly forced soldiers to fight "a war our government (was) afraid to let them win."

Avoiding another Vietnam, says this school of thought, requires a figurehead government -- one that delegates all military decision-making power to generals and effectively strips it from elected civilians who will supposedly be too "politically motivated" (read: influenced by voters). This authoritarian ideology explains not only today's vitriolic reaction to the president's Afghanistan deliberations (including the conservative magazine Newsmax fantasizing about a military "coup" to "resolve the Obama problem") but also some of the most anti-democratic statements ever uttered by American leaders. It explains, for instance, Vice President Dick Cheney’s assertion that public opinion "doesn't matter" when it comes to military policy, and President Bush saying Iraq "troop levels will be decided by our commanders on the ground, not by political figures in Washington."

Of course, the Constitution deliberately gives "political figures in Washington" final say: Article I empowers Congress to declare and finance wars; and Article II states that while the White House "may require the opinion" of military officers, ultimately "the President shall be Commander in Chief."

Those provisions were no accident. By separating political from military power, and vesting our elected representatives with ultimate authority, the Founders purposely constructed a democracy that seeks to prevent the dictatorial juntas that often arise when no such separation exists.

In that way, the Constitution doesn't worry about elected officials' "political motivations" as Sen. Bond does, nor does it fret about "a disconnect ... between the military leadership and the White House," as Sen. John McCain, R-Ariz., lamented. It views "political motivations" and a "disconnect" as democratic forces guaranteeing that public opinion, via elected "deciders," is somewhat involved in military policy.

Certainly, Obama and Democratic congressional leaders may still end up defying public will by making the lamentable choice to escalate the Afghanistan war. But after recent quagmires justified by knee-jerk subservience to military prerogative, America should at least applaud these lawmakers for refusing to immediately rubber-stamp that course of action. In exploring all options, they are honoring the Constitution's separation of powers -- and our nation’s most democratic principles.