The evil savior of "The Hills"

Plus, "Dollhouse" and "Project Runway" replace the devil you know 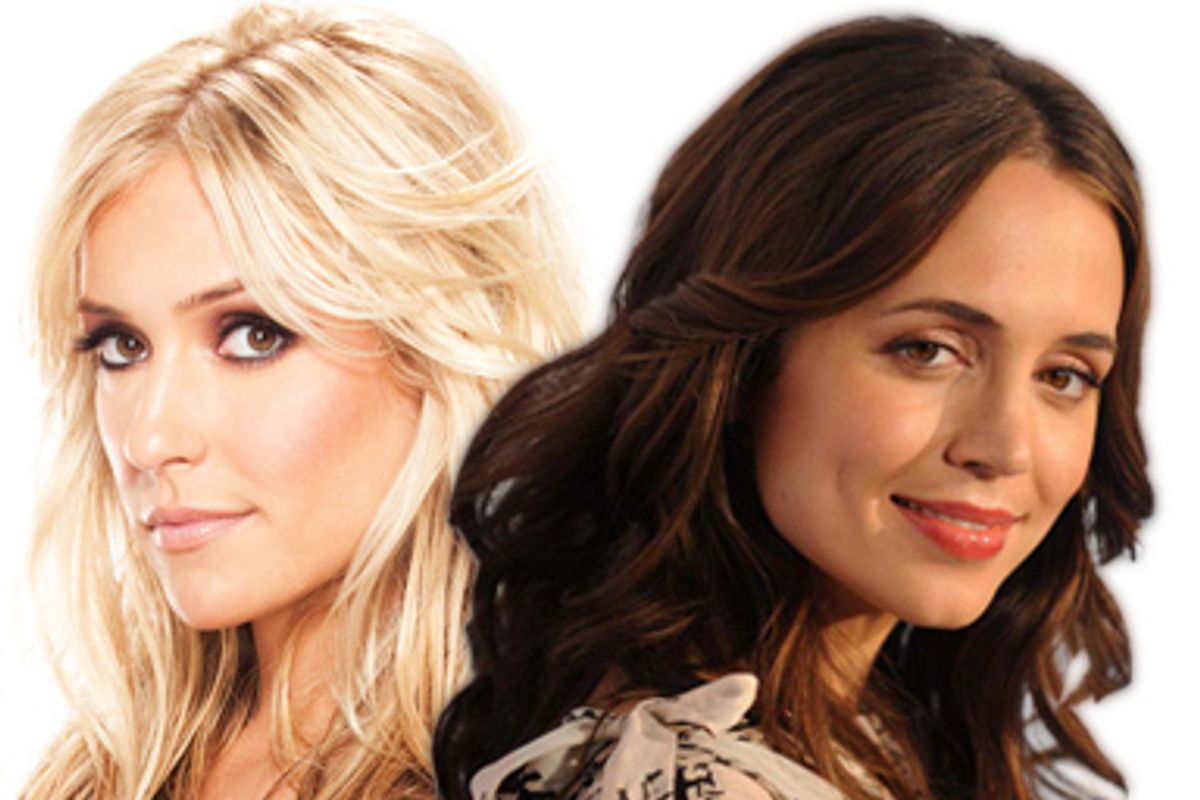 We accept substitutes all the time, just to keep ourselves going. We substitute a glass of wine for a feeling of inner calm, we substitute pornography for a fulfilling sex life, we substitute the novelty of daily media for personal growth, we substitute poignant televisual entertainments for meaningful long-term relationships.

But we need our substitutes to get through the day, a day littered with reminders that we don't have everything we want. Or at least, we tell ourselves that story, as a substitute for really knowing what we want in the first place.

But let's leave such soul searching behind and replace it with something vapid enough to make us feel smart and thoughtful by comparison. MTV's "The Hills" (10 p.m. Mondays on MTV) should do the trick, as it's just the sort of impoverished suckudrama that has the abject lameness and extreme asshattery to vanquish all remnants of self-hatred left over from the realization that we're not nearly as evolved as we should be. Put another way, "The Hills" can make a common houseplant feel like the Dalai Lama.

Which is why so many common houseplants watch this show. Last Monday, the houseplant world was reeling, in fact, over the show's premiere, in which longtime bland-cracker heroine Lauren Conrad was replaced with her archenemy, former fellow "Laguna Beach" star Kristin Cavallari.

How could K.C. be an adequate substitute for L.C.? The houseplant online forums panted hysterically, wondering how L.C.'s squinting and staring into the middle distance and silently observing nightclub showdowns with all of the dynamism of a decorative ficus could possibly be swapped out for K.C., who bears an unfortunate resemblance to a real, living breathing human being, and therefore has far less suckumentary star potential.

Still, you have to hand it to Kristin, who chose to start things off with a bang by informing the gaggle of shiny but dense planets that once orbited around L.C.'s lesser sun that their days drifting through a peaceful, unexamined universe were over.

"OK, I'm sorry that I walked up here and was saying hi to my friends and you guys came at me like fucking piranha!" she spits at Stephanie (Spencer Pratt's meddling sister) and Audrina (wide-eyed, tattooed, vaguely confused L.C. sidekick), when the two express their concern that Kristin might not respect their continually televised emotional boundaries.

Alarmingly enough, Kristin seems aware that this entire suckscapade is an elaborate sucksperiment in sucktastical suckage. Her cackling laugh and flippant attitude indicate that -- gasp! -- she doesn't take "The Hills" or her role on it all that seriously!

Needless to say this infuriates the also-ran L.C. cronies to no end, since each of them has secretly hoped against hope to replace the dull glow of L.C.'s lukewarm lesser sun with their own repetitive orbiting. Instead, the evil geniuses behind "The Hills" recognized (correctly) that only a brand-new yet familiar star (or sun, as it were) would make this reinvented suckling succubus worth a second look.

Kristin scoffs, but she recites her nasty-diva lines convincingly, even though they've clearly been scripted for her by what we can only assume are a gaggle of low-paid sub-Saharan bloggers whose knowledge of American slang is derived primarily from reruns of "Flavor of Love 3."

Unlike L.C., Kristin swears a lot. She watches Lakers games on TV, and actually seems to know what it means when the ball goes into the basket. When she says dude, dude, she means it.

Stephanie translates all of this to the blank-faced mental midgets around her. "I'm sorry, but Kristin is not good news to all of us. She's the girl that's gonna stab us all in the back and she doesn't care." Wait, did someone slip Stephanie a whole season's worth of scripts prematurely?

If Kristin really is the girl who's gonna stab all of the nattering Nellies of "The Hills" in the back, and she doesn't care? Well, then, she is good news to all of us. She's the Jesus Christ of "The Hills," and we houseplants should ring in her entrance with glad tidings of great joy.

"You fucking idiot, you just fucked yourself," Kristin adds, for emphasis. Spoken like a true savior!

But while we're on the subject of substitutes: Where are Michael Kors and Nina Garcia, damn it? If setting the new, Lifetime-channel "Project Runway" (10 p.m. Thursdays) in Los Angeles means no Cavalierly Catty Kors or Nasty, Name-calling Nina, well then I don't want any part of it!

Patiently, I have waited for them, week after week, each week telling myself: Oh, come on now! Who's this friendly, blandly magnanimous professional, and where is sniffing, snotty, eye-rolling Michael Kors? How could anyone believe for a second that some rather polite, respectful fellow-editor person at Marie Claire (like we care about Marie Claire, by the way, just because Garcia was ousted from Elle and landed there) would be an adequate fill-in for that poker-faced, unamused, semi-indignant glare from Nina Garcia?

Yes, they're busy professionals who'll be back on the show soon, sure thing. Apparently Kors still designs clothing for old ladies (blame former contestant Santino Rice for that remark) and Garcia wants to keep this job by spending less time on the "Project Runway" set, glaring for the camera.

You know what, though? That's not good enough. These two are the stars of the show. Not Heidi Klum, for the love of Jean Paul Gaultier. Mon dieu, no! Michael Kors and Nina Garcia are the Tom Colicchio and Padma Lakshmi of "Project Runway." They are essential. Bring them back, or we'll lose interest fast.

But sometimes substitutes are better than the real thing, aren't they? Just look at the professional substitutes of Fox's "Dollhouse" (10 p.m. Fridays), the best of whom can charm the pants off a major arms dealer, efficiently solicit a proposal of marriage, then start kicking ass and taking names the second her cover is blown.

"Dollhouse" is back and, for the record, it remains a feisty, smart, dynamic, strange, thoughtful, provocative and, yes, deeply disturbing drama in its second season. In fact, I can't think of another drama that I think is half as exciting this fall, save for that one about nefarious reptilian aliens dressed up as friendly TV spokesmodels coming in November. Just take a gander at this fine exchange between Boyd Langton (Harry Lennix) and Dr. Claire Saunders (Amy Acker), in which Boyd suddenly shows interest in Claire's welfare in the wake of her discovery that she was once a doll. You really have to marvel at the way that Joss Whedon and Co. open up big questions in the most casual of scenes:

Claire: So should I interpret this new concern as pity, curiosity, deviant excitement? There's no judging in the dollhouse!

Boyd: You seem to be having a hard time.

Claire: My entire existence was constructed by a sociopath in a sweater vest. What do you suggest I do?

Boyd: Have dinner with me. I think you should get out of you for a while. And I'd be glad of the company.

Claire: I don't go out. I'm afraid to leave this place. I have a problem with crowds, with people and sunlight, open spaces, noise, pets. (snidely) For some reason I'm just built that way.

Boyd: Every person I know is pretty poorly constructed. Everyone has an excuse for not dealing. But eventually, that's all they are, excuses.

Mmm, so much tasty darkness to dissect in ye olde dollhouse, and so little time! How about the other great scene, where Topher (Fran Kranz) and (a suddenly enraged) Claire can't seem to decide whether to make out or destroy each other. Doesn't Topher sound just like a parent when he tells Claire, "I made you question, I made you fight for your beliefs. I didn't make you hate me. You chose to."

As deeply unnerving as a tale of hired whores and fantasy substitutes may be, let's keep in mind that this modern world is filled with whores of all shapes and sizes, making the dollhouse a fitting metaphor for almost every one of our stupid lives. Furthermore, a den of whoring whores and whoremongers is clearly an apt place to explore countless themes ranging from how you construct your identity to the usefulness (and inconveniences) of free will to the underlying narcissism of romantic love. If there has to be a little nastiness and immorality at the heart of such a boldly smart journey into the folds of personality in the age of high capitalism, so be it.

Hold on, where was I? Whores for hire in the age of high capitalism ... Are we still talking about "Dollhouse" or "The Hills" or the self-promoting judges on "Project Runway"? Yes, world-weary whores and far perkier, more ambitious substitute whores are currently invading the streets of our cities like nefarious reptilian aliens. You can either substitute knowledge for ignorance and stick your head in the sand, or you can stand up and recognize the shape of things to come.

Dollhouse I Like To Watch Project Runway Television The Hills