The vast right-wing conspiracy is back

Some of Bill Clinton's most unhinged foes are flinging wild charges at Obama. This time, they're better organized 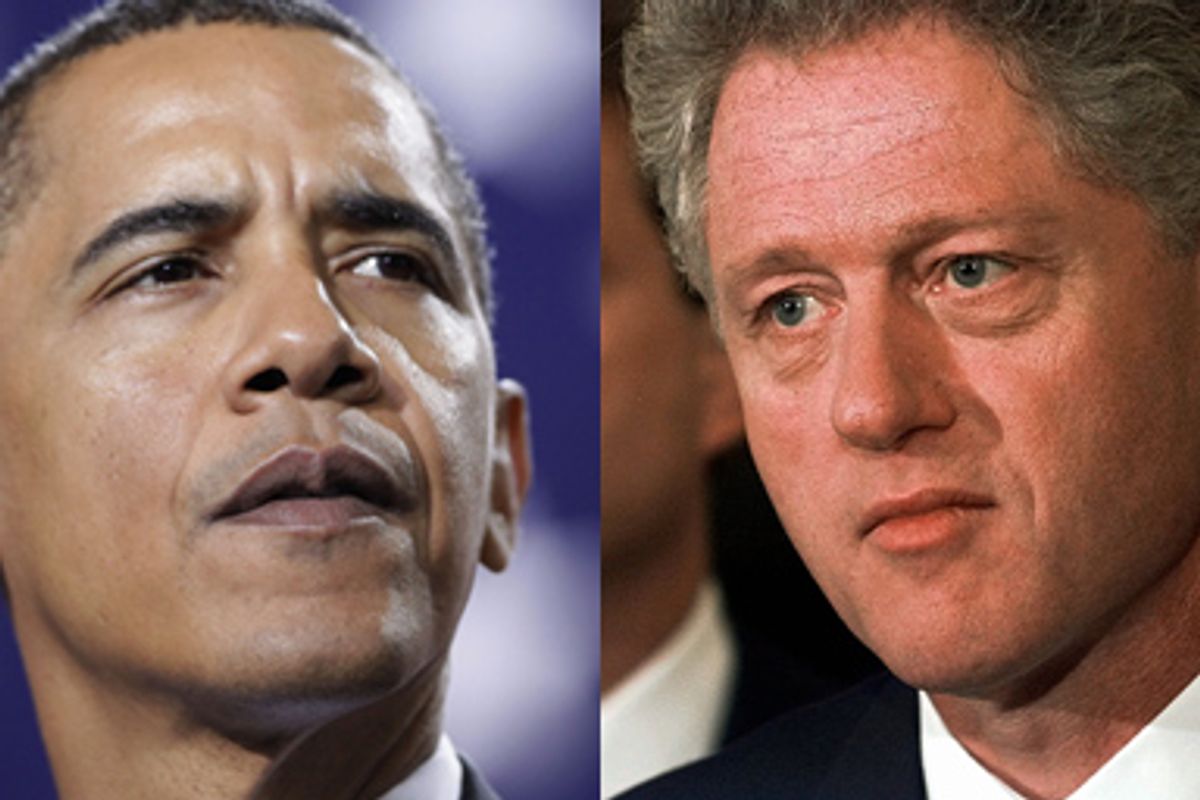 Wearily familiar as he is with the "vast right-wing conspiracy," Bill Clinton says the network that sought to destroy him and his wife, Hillary, remains malignant as ever, yet lacks the might of a decade ago. "It's not as strong as it was, because America's changed," he told David Gregory on "Meet the Press." "But it's as virulent as it was."

Whether Clinton is correct about the current condition of his old adversaries can best be measured by the passage or wreckage of healthcare reform and the outcome of next year's congressional midterm elections -- the same early milestones that marked the beginning of Clinton's tumultuous White House tenure. Perhaps Barack Obama will be saved by political demography and decent intentions, as the former president tried to assure Gregory; perhaps he and his administration will prove less vulnerable to intrigue and propaganda and less flawed than their predecessors.

What Obama should anticipate -- indeed, what he is already encountering -- is a cascade of slurs, threats and rhetorical violence that reanimates all of the worst themes of the bad old days. That wave will inevitably damage the president and his hopes for change, even if the majority of Americans is less receptive to right-wing messages than they once were. The greasy machinery once used to grind Clinton down has grown larger and more sophisticated by orders of magnitude, from Fox News Channel (which did not exist during his first term) to all of the conservative digital outlets that enable echoing and organizing on a truly vast scale.

The negative mythologizing of Obama bears a remarkable resemblance in tone and style if not precisely in content to the attacks on Clinton. "It's like when they accused me of murder, and all that stuff they did," said the former president -- presumably a reference to the wilder fantasies circulated in conservative publications about Obama, from the forged Kenyan birth certificates to the president's supposed plans to inflict corruption, homosexual radicals and Muslim jihad on innocent Americans. While some of the current themes mimic those deployed against Clinton, there are generational differences and the obvious fact that Obama is not just notionally "the first black president." That status evokes a special animus on the far right, of course -- although Clinton at least had earned the lifelong hatred of his most dedicated enemy, "Justice Jim" Johnson of Arkansas, for fighting segregation and racism in Arkansas.

Back when videotapes still had to be circulated by mail order, the Clinton-hunters did a brisk business with "The Clinton Chronicles," a "documentary" alleging that as governor of Arkansas he oversaw an enormous, unchecked racketeering enterprise that encompassed international bank fraud, cocaine smuggling and multiple murders, facilitated by a kind of backwoods dictatorship. Nothing resembling that remarkable work of extremist art, once promoted by the late Rev. Jerry Falwell and the Wall Street Journal editorial page, has appeared so far in the crusade against Obama -- but that doesn't mean nothing is in the works. Many of the same organizations and operatives behind the original Clinton smears are still active and some have amassed considerable wealth and influence over the intervening decade.

The signs of a resurgent right-wing smear industry, and the role that would be played by the old VRWC in the Obama era, first became clear toward the end of last year's historic election. Suddenly in the final months of the campaign, long after conservatives had despaired of another Swift-boat triumph, a curious outfit called the National Republican Trust PAC emerged from the shadows with two exceptionally nasty independent commercials -- and millions of dollars to spend airing them. Between the end of September and Election Day, the mysterious NRT PAC raised and spent enough money to qualify as the single largest non-party purchaser of airtime in the 2008 election.

Using a photo of Mohammed Atta, the first NRT ad connected Obama to the 9/11 hijackers with the false claim that he wanted to permit illegal immigrants to get drivers licenses. FactCheck.org described that ad as "one of the sleaziest false TV ads of the campaign." The second ad attempted to remind voters about Rev. Jeremiah Wright, the former pastor at the Chicago church where the Obama family worshiped, whose black nationalist sermons caused them to break with him during the presidential campaign. The script criticized Obama for failing to protest Wright's sermons sooner and warned that the Democrat was "too radical" and "too risky."

These blunt instruments of political warfare were less interesting than their creators. The executive director of NRT PAC, responsible for the production of those ads, was Scott Wheeler -- who had worked, years before, on the making of "The Clinton Chronicles," according to reporter Murray Waas. Behind Wheeler was the mastermind of the NRT PAC and one of the central figures in the anti-Clinton network of the '90s: Christopher Ruddy.

Now editor and publisher of Newsmax, the enormously successful right-wing magazine and Web site, Ruddy was the journalist who spun the most fanciful theories about the death of Clinton White House lawyer Vince Foster. Working at the Pittsburgh Tribune Review, owned by billionaire and avowed Clinton foe Richard Mellon Scaife, Ruddy popularized the canard that Foster had not committed suicide, as determined by five official investigations, but more likely had been murdered -- possibly to cover up corruption in the Whitewater land deal or because of an illicit affair with Hillary Rodham Clinton or both.

Beyond spreading paranoia about the Foster tragedy, Ruddy and Scaife both played central roles in the distribution of nearly half a million copies of "The Clinton Chronicles" and other covert machinations against the Clinton White House –- most notably the "Arkansas Project," a $2.4 million scheme to dig up or invent crimes by the president and first lady, with assistance from several unsavory characters, including die-hard segregationist Jim Johnson, a couple of private detectives and a bait-shop owner.

Ten years later, life has changed for Ruddy and Scaife. They're partners in Newsmax, based in West Palm Beach, Fla., and now the largest conservative publication in the country, both online and off. With 130,000 print subscribers its circulation is nearly twice as large as the Weekly Standard, and with nearly 4 million unique monthly visitors to Newsmax.com, it is larger than the Drudge Report. According to Forbes, which profiled Newsmax last spring, the low-budget site and its affiliates brought in nearly $30 million last year. More important than its profits is its sway over conservative readers.

Newsmax is a muscular media presence with influence across the right from Rush Limbaugh and all his radio imitators to Fox News Channel and beyond. Ruddy was among the most insistent endorsers of the Obama birth certificate myth, playing much the same role he once did during the Vince Foster affair. He has assiduously promoted the "tea party" movement and the "socialism" meme. When Newsmax published an essay by an obscure former newsman that seemed to urge a military coup against Obama last week (and then removed it), the reverberations were felt across the political spectrum. Every day the site blasts forth a barrage of supposed Obama scandals and embarrassments to be amplified by Limbaugh, Glenn Beck and the panoply of talk radio and cable megaphones, knowing that by sheer volume, some of it will stick.

Combining the propaganda power of Newsmax with the spending power of the NRT PAC, the once-laughable Ruddy could become a formidable player in the 2010 midterm elections -– and the fate of the Obama administration.

As Clinton himself pointed out, the same forces that wanted to defeat and destroy his administration have predictably mobilized against Obama. For the moment, however, those forces cannot muster the same kind of concerted attack that almost brought Clinton down. They may still have Scaife's money but they have no independent counsel, like the partisan zealot Kenneth Starr. They have no scandal-mongering allies in the mainstream media, like the late William Safire of the New York Times. They have no congressional majority, and nobody like Newt Gingrich to build and lead one -- at least not yet.

Yet while the Republican right struggles for credibility, leaving Obama with breathing space, he and his aides ought to reconsider their scornful and high-handed attitude toward the progressive wing of their own party. They might just lose the Democratic majority next year and find themselves facing the sharp end of a series of congressional investigations or worse. If and when that happens, as Clinton could remind them, the progressives will be their only reliable allies.