The 18th century's patron saint of free markets shares his surprising views about Barack Obama and the U.S. economy 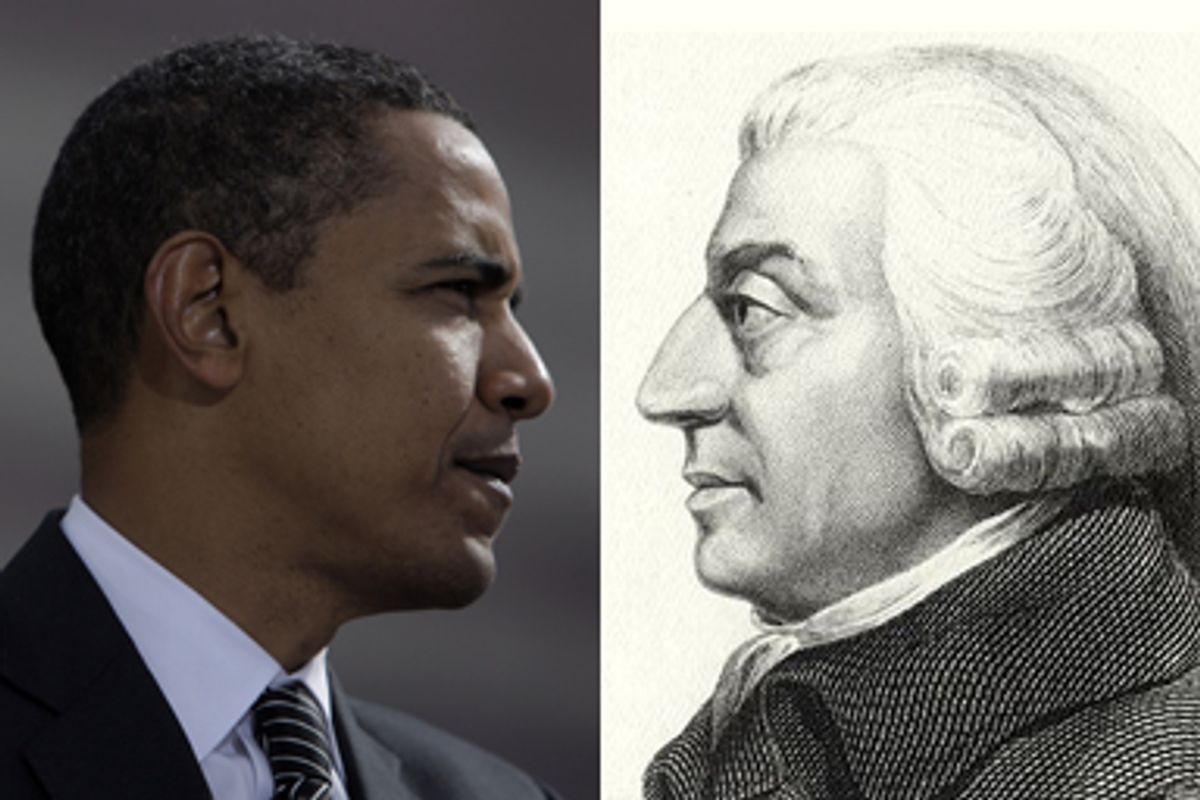 U.S. President Barack Obama and Adam Smith (from an etching done in the 1800s)
--

Our guest today is Adam Smith, a major figure of the Enlightenment who is widely considered to be the father of modern economic theory. He is a former professor at the University of Glasgow and the author of "The Theory of Moral Sentiments" (1759) and "An Inquiry into the Nature and Causes of the Wealth of Nations" (1776), his best-known book. Professor Smith joins us from Scotland.

Professor Smith, the Obama administration recently imposed tariffs on China, after companies and unions in the U.S. complained that the Chinese tire industry benefits from Chinese subsidies as well as an undervalued exchange rate. Most editorial pages and magazines in the prestige press denounced the tire tariffs as a threat to free trade. You are generally considered the patron saint of free trade. What is your view of the tariffs on Chinese tires?

The case in which it may sometimes be a matter of deliberation how far it is proper to continue the free importation of certain foreign goods is when some foreign nation restrains by high duties or prohibitions the importation of some of our manufactures into their country ... There may be good policy in retaliations of this kind, when there is a probability that they will procure the repeal of the high duties or prohibitions complained of. The recovery of a great foreign market will generally more than compensate the transitory inconveniency of paying dearer during a short time for some sorts of goods. To judge whether such retaliations are likely to produce such an effect does not, perhaps, belong so much to the science of a legislator, whose deliberations ought to be governed by general principles which are always the same, as to the skill of that insidious and crafty animal, vulgarly called a statesman or politician, whose councils are directed by the momentary fluctuations of affairs.

It will come as a great surprise to many people to learn that Adam Smith favors retaliatory tariffs in some cases. Would you make any other exceptions to the general rule of free trade?

Interesting. Your second point brings to mind the argument that American exports are punished, because most countries in Europe and Asia impose a value-added or VAT tax on U.S. imports, and at the same time grant VAT rebates to products that they export -- penalizing American exports while subsidizing their own. Some argue that the adoption of a VAT in the U.S. could level the playing field.

It is often claimed that globalization is a force that cannot and should not be slowed down. And yet although you favor free trade in general, you argue that national economies should be opened up to foreign competition only slowly and carefully, in order to minimize economic and social disruption. Would you please explain your reasoning?

The undertaker of a great manufacture, who, by the home markets being suddenly laid open to the competition of foreigners, should be obliged to abandon his trade, would no doubt suffer very considerably. That part of his capital which had usually been employed in purchasing materials and in paying his workmen might, without much difficulty, perhaps, find another employment. But that part of it which was fixed in workhouses, and in the instruments of trade, could scarce be disposed of without considerable loss. The equitable regard, therefore, to his interest requires that changes of this kind should never be introduced suddenly, but slowly, gradually, and after a very long warning.

The minimum wage in the United States today is far below what it was a few decades ago, thanks to inflation. At the same time, in the last generation wages have stagnated while roughly half of the gains from economic growth have gone to a tiny number of rich Americans. Many conservative economists and business executives argue that companies cannot afford high wages for ordinary workers. Aren't high salaries and bonuses costs as well?

One common theme of economic conservatives is that poor people in the U.S. are not really poor, compared to the truly destitute in developing countries. Many poor Americans own cars and television sets. Do you think that poverty should be measured in absolute, world-wide terms, or in relative terms, with reference to the living standards of particular societies?

By necessaries I understand not only the commodities which are indispensably necessary for the support of life, but whatever the customs of the country renders it indecent for creditable people, even the lowest order, to be without. A linen shirt, for example, is, strictly speaking, not a necessary of life. The Greeks and Romans lived, I suppose, very comfortably, though they had no linen. But in the present times, through the greater part of Europe, a creditable day-labourer would be ashamed to appear in public without a linen shirt, the want of which would be supposed to denote that disgraceful degree of poverty which, it is presumed, nobody can well fall into, without extreme bad conduct. Custom, in the same manner, has rendered leather shoes a necessary of life in England.

Many libertarians and conservatives argue that the only fair tax system would be a flat tax. In your opinion should the tax system be flat or progressive?

The necessaries of life occasion the great expense of the poor. They find it difficult to get food, and the greater part of their little revenue is spent in getting it. The luxuries and vanities of life occasion the principal expense of the rich, and a magnificent house embellishes and sets off to the best advantage all the other luxuries and vanities which they possess ... It is not very unreasonable that the rich should contribute to the public expense, not only in proportion to their revenue, but something more than in that proportion.

American labor activists and many liberals support the Employee Free Choice Act (EFCA), which would make it easier for workers to form unions. Many conservative economists argue that greater unionization would cripple the U.S., causing higher unemployment and rendering the U.S. economy less competitive. Do you agree?

We rarely hear, it has been said, of the combinations of masters, though frequently of those of workmen. But whoever imagines, upon this account, that masters rarely combine, is as ignorant of the world as of the subject. Masters are always and everywhere in a sort of tacit, but constant and uniform, combination, not to raise the wages of labour above their actual rate ... Masters, too, sometimes enter into particular combinations to sink the wages of labour even below this rate.

Speaking of combinations, here in the United States we are witnessing major lobbying campaigns by lenders to prevent Congress from creating a consumer credit protection agency and by health insurance companies that seek to defeat a public health insurance option. What do you think of organized lobbying by business interests?

People of the same trade seldom meet together, even for merriment and diversion, but the conversation ends in a conspiracy against the public, or in some contrivance to raise prices.

During the 1980s, some followers of British Prime Minister Margaret Thatcher and American President Ronald Reagan wore neckties decorated by your profile. Thatcher said, "There is no such thing as society," and Reagan said, "Government is not the solution. Government is the problem." According to free-market conservatives, government should be run like a private-sector business and the noblest figures in society are business executives and entrepreneurs. Do you agree?

The violence and injustice of the rulers of mankind is an ancient evil, for which, I am afraid, the nature of human affairs can scarce admit of a remedy. But the mean rapacity, the monopolizing spirit of merchants and manufacturers, who neither are, nor ought to be, the rulers of mankind, though it cannot perhaps be corrected may very easily be prevented from disturbing the tranquility of anybody but themselves.