Meet the "vook," the latest "book of the future" 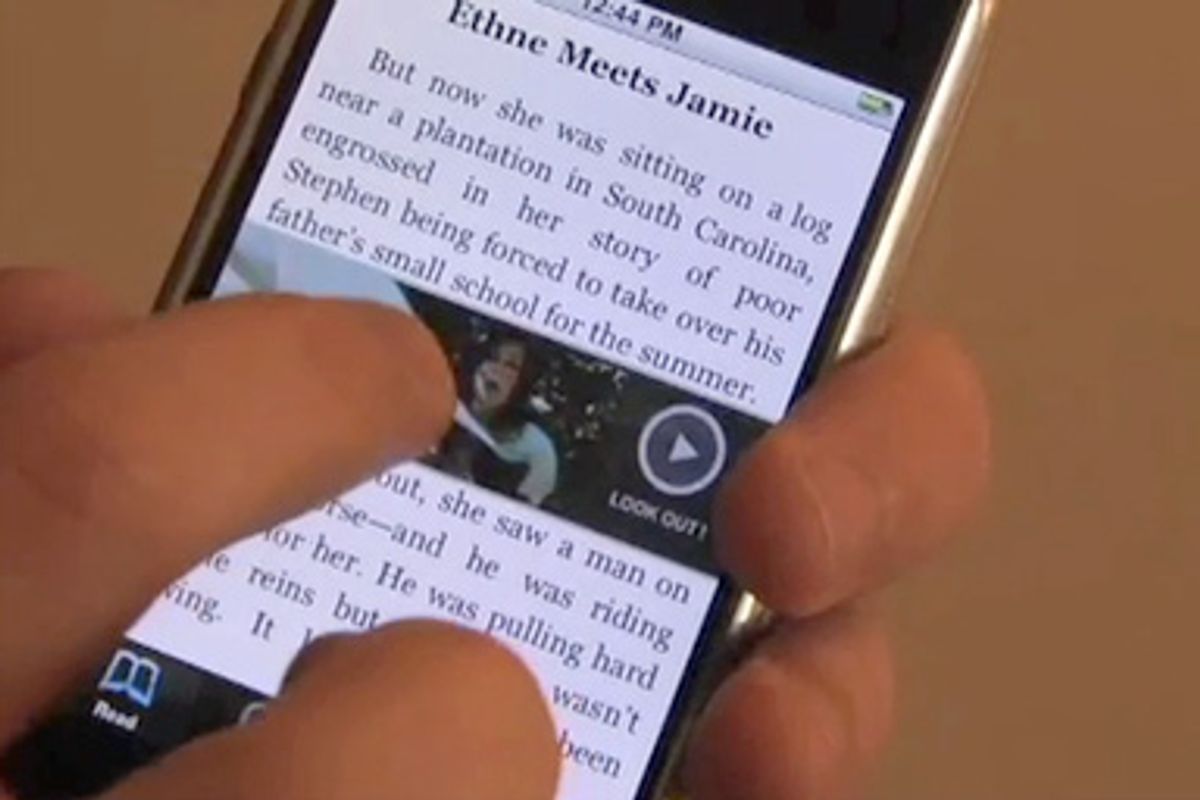 Technology changes at a dizzying rate, yet somehow our ways of writing about it don't. Take that hoary chestnut, the "future of the book" piece, which first appeared with the introduction of CD-ROM encyclopedias (remember Encarta?) in the late 1980s and achieved its nth iteration on Thursday, when a front-page story in the New York Times announced the debut of the "vook," a video-book hybrid, four of which have just been released by Atria Books.

The unfortunately named vooks consist of text and video clips produced in concert to form integrated works. You can read/watch them with a Web browser, but they're primarily intended for mobile devices like the iPhone and meant to win over those people you see on the subway or in airports frantically pounding their thumbs through endless rounds of Frogger instead of reading a David Baldacci novel. The spectacle of people not reading in public has become a motivating trauma for many publishing executives of late. Brian Tart, publisher of Dutton Books, told the Times' Motoko Rich, "You see people watching these three-minute YouTube videos and using social networks, and there is an opportunity here to bring in more people who might have thought they were into the new media world."

And so the familiar games begin. Someone is called upon to say that the sky is falling and to scold book publishers for being behind the times: "You can't just be linear anymore with your text," said Judith Curr, Atria's publisher. Then someone stuffier is summoned to detect the imminent fall of Western Civilization presaged by people's unwillingness to read great literature anymore. Professor Maryanne Wolf lamented, "Can you any longer read Henry James or George Eliot? Do you have the patience?" and novelist Walter Mosley asserted that "doing stuff on computers" actually degrades one's "cognitive abilities." The comments thread fills up with semi-hysterical fogies moaning, "Don't take my good old-fashioned books away! I love the way they smell!" And, finally, the geek punditocracy steps in to sniffily announce that although printed books are indeed doomed, this particular alternative is hopelessly lame, created by clueless print-oriented geezers who can't see that the real future lies in some yet-to-be-imagined, fantastically entertaining fusion of emerging media that our poor, reeling, post-adolescent brains can't hope to conceptualize.

Now that we have the formalities out of the way, it must be said that the geeks have a point; vooks are pretty lame, if these four specimens are any indication. The two nonfiction titles -- a fitness guide and a collection of recipes for making beauty products out of food -- have the most obvious utility, but as manuals they don't really address the problem of books being edged out of the marketplace for leisure-time entertainment; nobody used to read exercise books on airplanes before we had iPhones, either.

The two works of fiction in the foursome -- "Promises" by Jude Deveraux and "Embassy" by Richard Doetsch -- are, respectively, a romance and a thriller, two genres that dominate the bestseller lists. The video clips (which are embedded into the text) are used to add atmosphere or to convey minor plot points; you can watch them or not without missing much of the story, but since you have to stop reading to do so, they feel like extras at best or, at worst, like interruptions.

Since the texts themselves are excruciatingly hokey, it's hard to tell whether they're improved much by the video. Romances often aim for a certain travelogue appeal, and Robert Sobul's footage, shot on location at the Magnolia Plantation in South Carolina, is certainly preferable to Deveraux's cliché-ridden descriptive passages of antebellum Southern life. In particular, a whitewashed shed where the hero and heroine discover a corpse is so much creepier in Sobul's grainy nocturnal video than it is in Deveraux's story that it seems to belong to another narrative entirely. Sobul mostly, and cleverly, works around the limited acting abilities of his cast, but the costuming seems naggingly off and the decision to never show the hero's face eventually becomes distracting.

Why the mystery mug on this guy? Perhaps the actor wasn't leading-man handsome, or perhaps someone decided that the audience for romance prefers to imagine its ideal hero for itself. Either possibility points to the most significant problem in the vook model: For $7.99 I can buy a paperback romance novel and in my mind's eye cast Clive Owen as the lead, while a vook is only able to deliver a struggling unknown from the dinner-theater circuit. It costs real money to shoot merely decent location and dramatic scenes; most of the video material in these vooks resembles establishing shots and B-roll from sub-Hollywood TV programs. By contrast, a writer can crank out dozens of formulaic romances describing all kinds of lavish hotness and folderol for a relative pittance.

Which raises another problem, specifically about adapting the most generic genre fiction to the vook format; everyone in these books tends to be sensationally good-looking as well as fabulously rich and well-dressed. It's wish-fulfillment, a fantasy, and it wouldn't be a fantasy if it were accessible to people with modest personal gifts and budgets -- an apt characterization of the folks most likely to be making video for vooks. The kitchen-sink realism of, say, Raymond Carver would be more affordable, but surely a lot less commercial.

Speaking of modest gifts, would that there were a technology that could prevent people from writing sentences like this one: "While New York was considered one of the medical treatment capitals of the world, the need could arise where immediate medical attention was needed and in some case not meant to be made public through the area hospitals." Richard Doetsch's "Embassy" did afford me more enjoyment than the tedious "Promises," it's true, though most of it came in the form of hilarity that the author didn't intend to inspire. With a plot full of more holes than a subway grate, this preposterous thriller about a hostage situation in a New York embassy features as its villain a "new age magician." No, I am not making this up. And -- what did I tell you about the characters in bad genre fiction being improbably rich? -- he's so successful at this gig that he owns "a jet and a small island in the Caribbean." I guess that'll show the girls who yawned at his card tricks in high school!

There have been more creative recent efforts to soup up print books, such as the "The Amanda Project," a high school mystery about a missing girl in the form of an eight-book series and Web site, both of which will incorporate reader contributions. "The Amanda Project" is intended for "ages 13 & up," and, who knows, perhaps it will take off -- that is, if the intended readership can tear itself away from the Twilight Saga long enough to read the first installment.

Somehow, the old-school format of Stephenie Meyer's vampire romance series hasn't alienated the vast army of Twi-hards, most of whom, by the way, qualify as digital natives, the generation who supposedly have no patience for print. These are also the same kids who buried themselves in 500-page Harry Potter novels for entire weekends not long ago. Some even claim to find printed books a welcome break from staring at screens all day.

Text-only books can compete with other media, it seems, when the material speaks strongly to its audience. When it comes to fiction, the medium is not the message: injecting a bit of video into a mediocre story is not going to suddenly make it compelling. Books that really work succeed by doing what novels do best: immersing readers in a world blended of equal parts of the author's imagination and their own.