The first headstone stamped "Unknown" since 1984 is the result not of war's chaos, but of human error 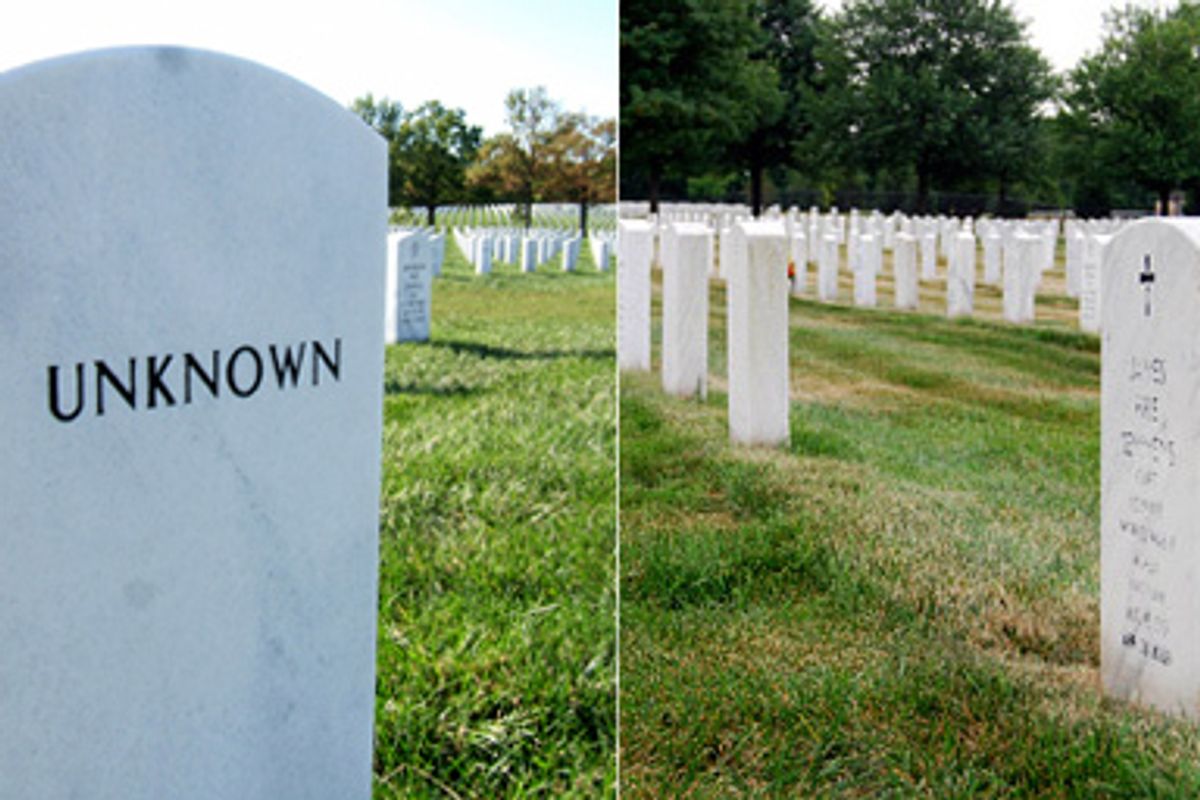 A headstone for an unknown soldier (left) sits in the empty grass spot, pictured at right on July 21, 2009.
--

For the first time in a generation, Arlington National Cemetery has marked the burial of an unknown on its storied grounds. Only this time, 25 years since the last interment at the Tomb of the Unknowns, the identity of the body remains a mystery not because the ravages of war made identification impossible, but because in a bureaucratic error the cemetery lost the paperwork showing the identity of the remains.

This is the first time the cemetery has marked an unknown since 1984, when Arlington entombed the remains of a Vietnam veteran in the Tomb of the Unknowns in a ceremony rife with pomp and circumstance. Former President Reagan presided, posthumously awarding that service member the Medal of Honor. And that unknown soldier was supposed to be the last unknown interred in any U.S. military cemetery, given advances in DNA technology and a multimillion dollar effort to account for every soldier and identify all remains. A body that could not be identified was supposed to be a thing of the past.

But Arlington's newest unknown, buried without special ceremony, is the exception to what was intended to be the rule. The cemetery buried someone in grave 449 -- likely relatively recently, since that section is an active part of the cemetery -- and then lost track of the paperwork showing the identity of the remains. In 2003, workers went to bury a newly deceased service member in that plot, only to find unmarked remains in the ground. Paper records had listed the plot as vacant.

Rather than publicly admit this error, Arlington quietly left the remains unmarked for six years. For those six years, passersby saw only an empty plot of green grass in spot 449, surrounded by stones etched with names.

This remained the case until this past summer, when Salon began working on tips from current and former workers at Arlington who said these kinds of mistakes occur with disturbing frequency at the cemetery, which calls itself "our nation's most sacred shrine."

At first, Arlington denied any problem. Salon asked the cemetery last summer, "Has the cemetery ever dug a grave only to find there is already someone there, though the grave is unmarked?" Cemetery spokeswoman Kaitlin Horst responded, "We are not aware of any situation like that." Salon later produced internal paper records showing that the cemetery did not know the identity of the remains in grave 449.

That apparently caused Arlington to change its tune. "Arlington National Cemetery officials have known about this situation since 2003, when in the process of preparing for a burial, a casket was discovered in grave 449 in Section 68," Horst then admitted. "At that time, a review of records took place to locate the corresponding documents. The files could not be matched."

Horst insisted that this was the only mistake of its kind. "At this time," she said, "cemetery officials are not aware of any other instances."

In this case, the cemetery lost the paperwork among the blizzard of paper records the cemetery still uses to track around 30 burials a day. While other cemeteries have computerized burial operations and now track grave locations via satellite, Arlington has failed to implement a similar system despite spending millions on favored contractors working on the fruitless effort for nearly a decade.

Arlington admits that the cemetery's burial paperwork does not match the location of some headstones in numerous cases, but cemetery officials insist that while the paperwork is wrong, all the headstones stand above the correct remains. This includes discrepancies in section 60, the final resting place of 600 veterans killed in Iraq and Afghanistan. The cemetery's 2008 report to Congress showed an example where cemetery officials tried to locate grave 6 in section 60 using one of over 100 paper maps the cemetery uses to guide operations. "When ANC went to locate the grave by using the burial map, section 60 grave 6 was in a different location than the actual physical location of the headstone marked section 60 grave 6," the report admits. The paperwork is wrong, the cemetery claims, but the headstone is in the right place.

Foster, the Army spokesman, said the Army is investigating how to identify the remains in grave 449, but would not reveal any details to Salon. "We cannot comment on an ongoing investigation," he said. "However, once the investigation is complete and reviewed by officials at Arlington National Cemetery, it is our intent to inform you at the earliest opportunity of what course of action has been deemed appropriate."

But the fact that the cemetery installed a marble headstone marked "Unknown," rather than the small temporary markers used at Arlington, suggests a degree of permanence. Also, the fact that the Army, which runs Arlington, has done little to identify these remains over the past 12 weeks suggests a reluctance to take the most rudimentary steps towards a possible identification.

For example, current and former service members represent a large percentage of the remains at Arlington. Many are buried in their dress uniforms, which include a name tag. Discovering the identity of the remains in grave 449 might be as simple as using a backhoe and Google.

However, this poses the risk of triggering a ripple-effect public relations disaster. The cemetery does not know if the remains in grave 449 are unknown because the intended headstone was mistakenly placed above another grave. If so, the identity of those remains then becomes unknown. And so on, and so on.

Foster did not return an e-mail asking why the Army has not disinterred the remains for purposes of identification.

The idea that Arlington is creating unknown soldiers by bungling paperwork is particularly ironic given the military's otherwise exhaustive and often valiant efforts to live up to the "leave-no-soldier-behind" ethos. In 2003, the Army consolidated various offices that had already been working for over 30 years to find and identify remains into the Joint POW-MIA Accounting Command. Around 400 service members work full time, conducting roughly 50 missions per year, scouring the battlefields of Vietnam, Korea and even Germany for remains that are returned to the largest forensic anthropology laboratory in the world, located in Hawaii. The Department of Defense regularly issues news bulletins documenting the successful repatriation and identification of remains from long-ago conflicts, despite the obvious difficulty of the task.

Remains that cannot be immediately identified are stored in Hawaii -- but never buried anonymously. The idea is that continuing advances in DNA testing will eventually result in the identification of all remains.

These efforts even resulted in the identification of the remains from Vietnam that Reagan helped lay to rest in Arlington's Tomb of the Unknowns 25 years ago. In 1998, the remains were disinterred and identified as those of U.S. Air Force 1st Lt. Michael Blassie. Blassie was later laid to rest in his hometown, St. Louis.

This unending dedication to preventing another unknown soldier lies in stark contrast to the paper-pushing going on at Arlington, which has resulted in at least one new unknown where most people would least expect it.