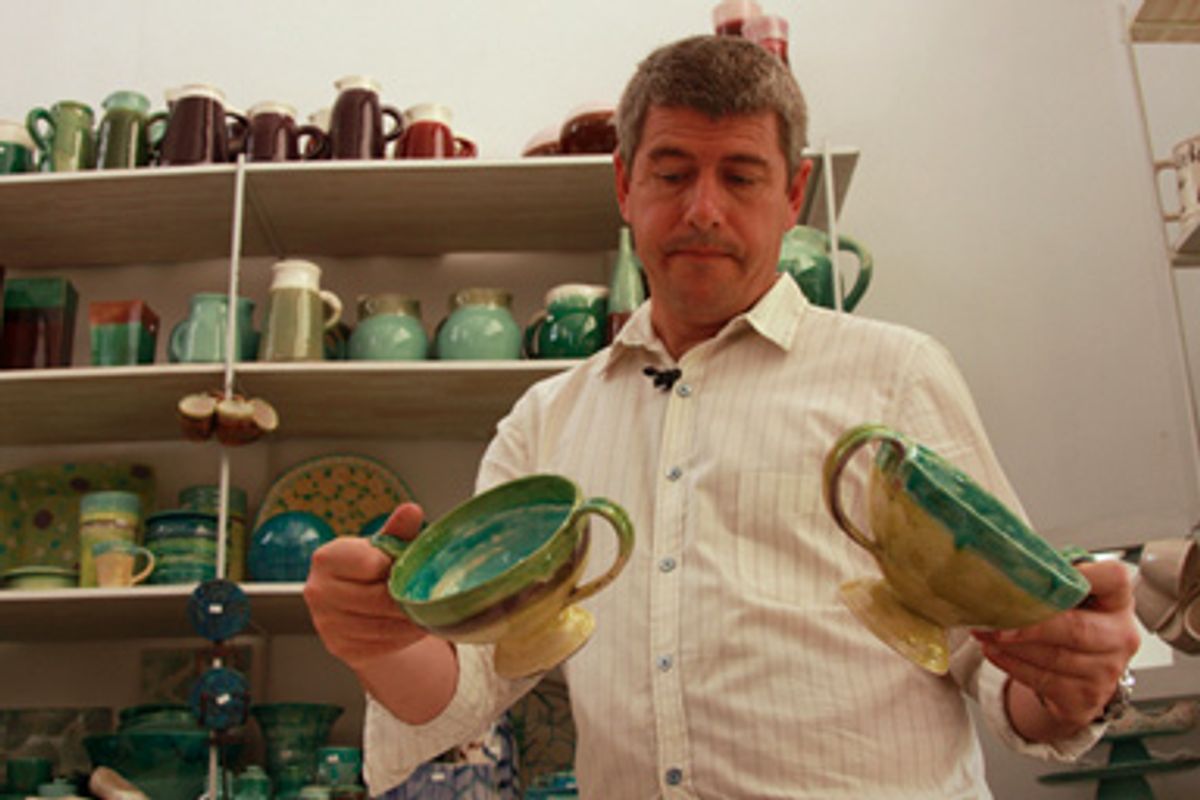 Today I received another catalog in the mail, the kind that can send almost anyone into a downward spiral of anxiety over the unbearable perfection of beautiful, imported, ancient, chipping, obnoxiously overpriced things. From the Brazilian handcrafted cowhide rug for $720 (Serena & Lily) to the 19th century Salerno Streetlight Pendant for $2,695 (Restoration Hardware) to the Bewick Cabinet hand-papered with detailed images of birds for $3,998 (Anthropologie), these things are expensive because they're just so real. They look like heirlooms handed down from generation to generation, from ancestors who milked cows on rambling farms in Tuscany or handcrafted wood furniture in Brazil or wove deliriously lovely fabrics in Indonesia. These things trumpet their own authenticity and hint at a connection to the earth and an appreciation for craftsmanship and artistry and the untold charms of the world's foreign peoples -- you know, the ones who squat in mud puddles, sewing embroidered birds onto 350-thread-count Egyptian cotton crib bumpers so that Serena & Lily can include them in their "Wren" Crib Set Collection (Heirloom quality, $969 each).

This is our new way of soothing ourselves over our lives of idle acquisition, by the way: We pretend to appreciate the strong hands that fashioned this hand-woven wool rug or built that delightful floor lamp. In this age of ephemeral digital connections and vaporous 24-hour media feeds when most of us spend our days squinting at computer screens, it makes sense that we would be infatuated by the notion of real labor, that we would cling to the concreteness of old stuff that looks like it has a long and storied history. Even as the recession drags on, the catalogs keep coming in the door, a testament to the fact that half of the free world still expects to match the impeccable taste of international-flea-market-scouring gay men.

Which is exactly why Sundance's "Man Shops Globe" (premieres 10 p.m. Wednesday, Oct. 7) is at once so fascinating and so repugnant. Of course, I would never blame Keith Johnson for this. His job traveling the globe to buy enormous overpriced pieces of weird, ancient junk so that Anthropologie can put that junk in its stores and sell it for truly ludicrous, mind-blowing prices is obviously the sort of job that anyone who wishes they had enough time and energy to rummage endlessly through flea markets would love. He's a creative professional, one who's exceptionally good at spotting exactly the sorts of rusty old bullshit that anxious, existentially wobbly, overworked yuppies find hopelessly, thrillingly, reassuringly authentic.

This isn't Johnson's fault, nor is it really the fault of his longtime partner, Glen Senk, who is the CEO of Urban Outfitters, which owns Anthropologie. This isn't the fault of his sister-in-law Pam Senk, who travels all over the globe with him. This isn't even the fault of the Sundance Channel, with its own authentic-sounding brand name, so evocative of Robert Redford and worn Frye cowboy boots and handmade turquoise jewelry and enormous farm tables made from recycled wood and darling film festivals frequented by the same anxious, existentially wobbly, film-loving, cowboy-boot-wearing yuppies.

One might blame the production company World of Wonder, with its staff of carefree, disconcertingly stylish gay men who craft smart documentaries and hip reality series and poignant docu-soaps (whatever those are) on stage moms and beekeepers and celebutots, or their creative founders, Fenton Bailey and Randy Barbato, who can list everyone from RuPaul to the late Tammy Faye Bakker as their closest personal friends. But blaming such amiable, talented types as these for bringing more sly but affectionate stories into the world would be tantamount to envious lashing out.

And just because we don't personally have the cash to fly off to Turkey for textiles or Tunisia for carved olive wood or Holland for Modernist décor, at least we can follow Johnson there, watching as he announces that a circus backdrop has "good color" and waves approvingly at a beat-up school table at the Avignon Fair, a huge antiques market in Provence. "Taxidermy" is the code word he mumbles to his French agent, thereby empowering the man to pay asking price, but to try to get the item for less. Meanwhile, Johnson has moved on to bigger, better, older things, like a pair of enormous painted panels and a big stack of delightfully odd antique posters.

"When you go to a fair, there's a rush that you get that you can't get anywhere else," Johnson tells us, but presumably he's not referring to the Cliff Avenue Flea Market in Sioux Falls, S.D. Johnson's not even talking about the stuff in Paris, which is just too overpriced to make even more overpriced back in the U.S. In Paris, for example, Johnson spots some truly lovely old metal flower pots that are $200 each, but he knows he can't sell them for that much at home.

"What can I do to create something that justifies these high prices?" Johnson asks in a voice-over. He quickly conceives of an odd and expensive objet d'art that he might craft from this already-marked-up trash: a table with metal flower pots built into it. What possible function could it serve? Does it matter? These seat-of-the-pants, improvised, surrealist faux-antiques will look incredibly unique back in the flagship store in Manhattan!

Johnson creates value. And there's nothing bad about that, nothing wrong with having a great eye for unusual objects and original art that the Anthropologie demographic of hip urban 30-somethings will adore. Aurelie Alvarez, an artist we meet in Provence, says she hung "her very first painting" in her mother's shop and "Keith bought that painting and ordered another ten canvases and some backdrops, and that's how my career started." Who can argue with budding, talented artists making a reasonable living creating art?

And make no mistake about it: Johnson's job traveling far and wide in search of grandiose antiques, impish art and off-kilter treasures isn't without its pressures. "Keith's seen everything, all over the world," says Trevyn McGowan, Johnson's South African agent. "So it's always a challenge to try and find the most exciting thing you can."

In keeping with this assessment, McGowan shows Johnson some ceramic vegetables, but Johnson isn't impressed. "You can buy a ceramic piece of corn in China for less than a dollar," he snaps. "It just worries me that it's been done and done and done and done and done. Unless there's something really unusual and witty about it, it's gonna be at a price point that's not gonna be ..." he trails off.

Johnson wants "things that let people know more about this very extraordinary country" and "things that have real resonance" but not things that are in every craft market or import store in New York City, but "just the right thing has been eluding us."

Luckily, on their way through the South African countryside, Johnson and McGowan unexpectedly stumble on a furniture maker creating benches out of tree limbs and odd bits of lumber. "He was a guy who clearly loved what he was doing, and that came out in his things," says Johnson. And so we return to the unspoken goal of these treasure hunts: to ease the anxious yuppie back home. If you hate what you do for a living, at least you make enough money to own stuff that was created by someone who loves what they do.

"I don't want anything in the store or in my home that doesn't have soul and a sense of history," Johnson told 1stDibs magazine in describing his very exacting standards. But let's not blame him for this expensive pursuit of soul and history. No, let's blame the slippery, hectic, disposable, mass-produced culture we live in, first and foremost, the culture that makes us ache for things that mean something, that might be genuine enough to ground us between tweets. Let's blame the hideous stucco huts and vinyl-sided monstrosities whose ugliness added insult to the injury of our impending bankruptcies. Let's blame the overpriced but still cheap-looking crap we bought at Target before we lost our jobs, cheap stuff that made us sick to cast our eyes upon it, when compared to the divine, sacred things we saw in those damnable catalogs on the floors of our bathrooms. That cheap stuff and those sacred catalogs had us silently vowing to purchase only Egyptian cotton towels with hand-embroidered details on their silky edges from now on, come hell or high water, even if it cost us our souls.

Because if the world weren't so filled with tacky, impermanent things, then we wouldn't thirst so terribly for big, heavy, meaningful furniture flown in from Paris. If the world weren't littered with Styrofoam cups and vertical blinds and stained wall-to-wall carpeting and other tacky junk, then we wouldn't be so hungry for that meticulously branded, fully sanctioned and approved, carefully designed, obscenely expensive imported French junk.

But try telling Johnson this stuff is junk. In fact, the most telling moment of "Man Shops Globe" comes when Johnson is presented with a grandiose, colorful, tangled plastic chandelier, the sort of "Emperor's New Clothes" objet d'art that walks the line between trash and treasure, between exquisite and hideous. What will Johnson think of this one? We wonder as he gazes almost confusedly at the monstrosity.

Finally, he pronounces it divine. "It was the high-low thing, which is always so interesting," Johnson explains. "You have this very grand chandelier shape, and then, on close inspection, you see that it's made of Barbie legs and plastic milk bottle tops." And so, another bit of arts and crafts is christened and made relevant by Johnson's Midas touch. Indeed, at the end of the second episode a quick note on-screen tells us that the even-larger chandelier Johnson commissioned from the same artists "was purchased by President Obama. It now hangs in the children's room in the White House."

Which just goes to show you that none of us are above seeking the validation afforded by truly special, anointed, original, odd, whimsical things. It's just that most of us can't afford them.