What is the Vatican, exactly? 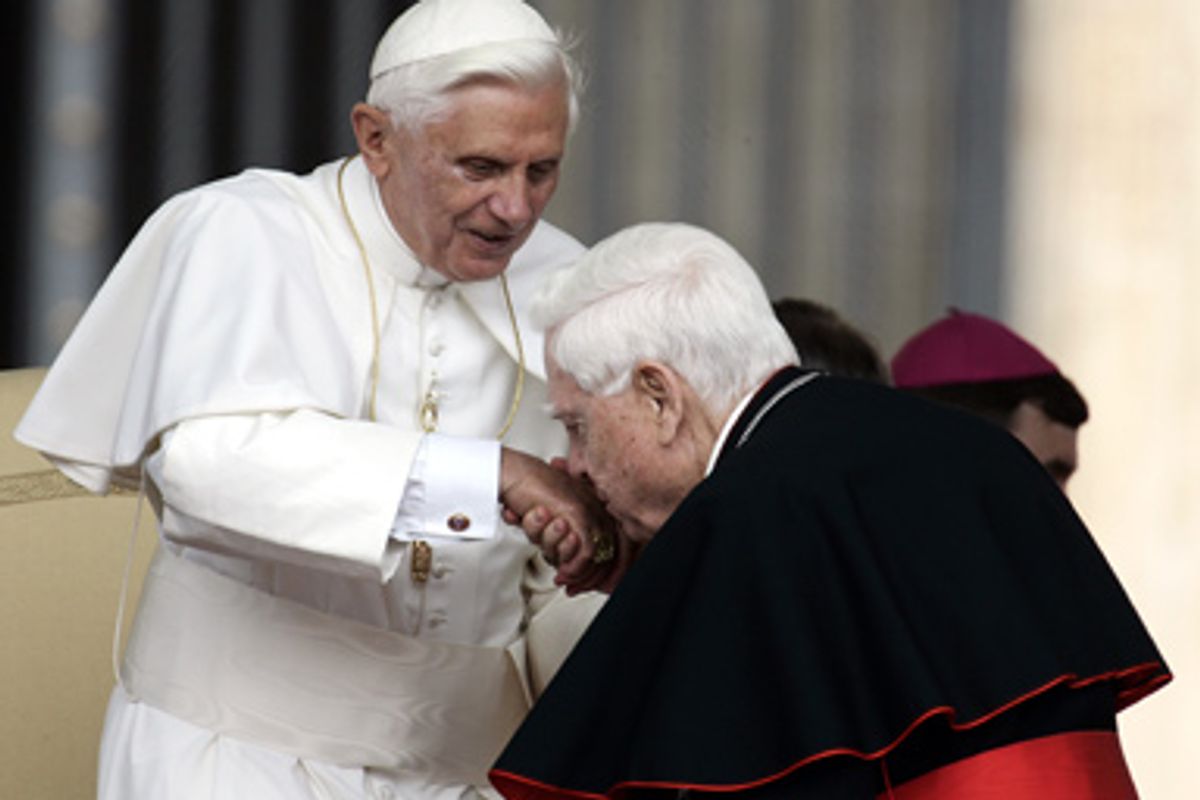 Pope Benedict XVI has his hand kissed by Cardinal Bernard Law during the weekly general audience in St. Peter's Square at the Vatican, Wednesday June 7, 2006.
--

There’s little doubt that the 2002 sex abuse scandal in the Catholic church brought out the worst in official and some unofficial Catholic circles. Coverups and unconvincing explanations about why pedophile priests were routinely transferred to new parishes where they could continue to abuse children were the order of the day. While the U.S. bishops fairly quickly established a commission and put in place policies to prevent future abuse, they pretty much continued to claim innocence as more and more dioceses faced lawsuits for the coverups.

The Vatican was even less nimble. Pope John Paul II came in for heavy criticism for his handling of the scandal and for Vatican policies that used diplomatic immunity as well as orders of secrecy to suppress information and limit legal exposure. For John Paul II being pope seemed to mean never having to say you are sorry.

Benedict XVI made up for some of his predecessor's actions by not only apologizing but meeting with abuse survivors on his 2008 U.S. visit. But any goodwill the Vatican gained was eroded when Archbishop Silvano Tomasi lashed out at criticism of the Vatican’s handling of clergy sexual abuse at last week's meeting of the U.N. Human Rights Council in Geneva. In a petulant written statement Tomasi, identified in media reports as the Vatican’s representative to the U.N. but known within the Vatican by the strange title of Ambassador to Nowhere, became the Ambassador from Hell, repeating nearly every shibboleth the Vatican and its apologists have used to minimize clergy sexual abuse over the past decade. And Tomasi's statement also exemplified the odd role that the Vatican plays in the U.N. He was exercising the Vatican's "right to reply" as a "Non-member State Permanent Observer" to a complaint brought by an NGO. But is the Vatican really a state? For a long time, the Vatican has sought to have its cake and eat it too, enjoying the privileges of statehood without the responsibilities. Now the issue of child abuse has laid the contradictions bare.

Tomasi was responding to a charge brought to the U.N. Human Rights Council by the International Humanist and Ethical Union, alleging that the church had covered up abuse and allowed it to continue. Tomasi recited a familiar, and disappointing, litany. The problem is minor, the Catholic church is being picked on while other religious groups that are more abusive are ignored by the media and, of course, homosexuals, not pedophiles or bishops, are to blame. Outraged that anyone would question the church's intentions, Tomasi noted that "the church has been busy cleaning its own house" and suggested "it would be good if other institutions and authorities where the major part of the abuses are reported could do the same and inform the media about it."

In an unscientific critique reminiscent of Vatican claims that condoms don’t prevent AIDS because they have little holes in them, Tomasi argued that it would be more appropriate to consider the problem one of homosexuality rather than pedophilia: “While many speak of child abuse, it would be more correct to speak of ephebophilia, being a homosexual attraction to adolescent males. Of all priests involved in the abuses, 80 to 90 percent belong to this sexual orientation minority which is sexually engaged with adolescent boys between 11 and 17 years old." Of course, 11-year-olds are not adolescents, but the archbishop seemed ignorant of the basic principle that sex between an authority figure and anyone in his or her care of any age is an abuse of power.

And he seemed totally oblivious to the fact that the reason he was called on the U.N. carpet had far more to do with the Vatican's failure to protect children from such abuse. As recently as 2004 Pope John Paul II granted a special audience to Father Marcial Maciel, the Mexican priest who founded the right wing group the Legion of Christ and had been repeatedly and credibly accused of child sexual abuse since the 1970s. It was Benedict who finally had enough of Maciel and ordered him in 2006 to retire quietly to a life of prayer and initiated an investigation of the charges of sexually abusing young seminarians as well as fathering three or four children and supporting them with the order’s money. Not a single bishop has faced serious repercussions for his role in covering up sexual abuse. Boston’s Cardinal Law was forced to resign as archbishop of Boston but given a sweet job in Rome as the titular cardinal of Santa Susanna, the American Catholic church in Rome.

It is unsurprising, then, that for years NGOs interested in separation of church and state have criticized the Vatican’s special status within the U.N., calling it a violation of the separation of church and state. The Vatican is the U.N.'s sole Non-member State Permanent Observer, giving it all the privileges of a member state except voting. No other religious body enjoys this status in the U.N., and some would say its claim to statehood rests on shaky grounds.

The 1933 Montevideo Convention on the Rights and Duties of States defined the four criteria of statehood -- permanent population, defined territory, government and the ability to enter into diplomatic relations. On the first count, the Vatican fails miserably. There is no permanent population at all. There are fewer than 1,000 residents and "citizenship" is temporary. One holds it only so long as one has a job or function related to the Vatican. Its territory is defined, though it occupies less than half a square kilometer in the center of Rome, but its governing capacity is minimal. The Vatican depends on the Italian government for most civic services, from garbage collection to healthcare and policing. And while the U.N. has no requirement that governments be democratic, the idea of a government run by an infallible head of state elected for life by a small group of men is a bit strange.

Even the Vatican admits its role in the U.N. is strange. "The Holy See finds itself in a particular situation because it is spiritual in nature. Its authority which is religious and not political extends over one billion persons throughout the world ... Its strength ... consists in the respect that its words, its teachings and its policy enjoy in the conscience of the Catholic world ... The real and only realm of the Holy See is the realm of conscience."

Sounds pretty much like an admission that the Vatican/Holy See is not a state. And yet, it has defended its right to participate in the U.N. as a state while seeking to have its cake and eat it as well. For the most part, the U.N. goes along. After all, on a number of traditional issues, the Vatican lends credibility to the peaceful objectives of the U.N. and to an emphasis on eradicating poverty. But in many areas, the Vatican uses its special privileges to obstruct more modern consensus on the usual issues -- contraception, condoms, women’s rights and stem-cell research. And although the Vatican signs some U.N. treaties and conventions, it refuses to be held accountable.

This was the crux of the IHEU complaints before the Human Rights Council. The Vatican has signed the Convention on the Rights of the Child, which calls for all states to protect children from sexual abuse. Not only has the Vatican failed to do that, according to the IHEU it has actively engaged in practices that put children at risk. IHEU cites actions that include claiming that children and their parents have lied about abuse, failing to inform civil authorities of accusations of abuse and impeding investigations by transferring priests accused of abuse out of the country. On a minor level, it has neglected since 1994 to file the reports on the status of children in its "state" required of signatories every five years. IHEU calls on the Human Rights Council and the Committee on the Rights of the Child to open up all Vatican records on child abuse and permit CRC workers to interview workers with knowledge of these matters.

Lawyers for victims of clergy sex abuse in Ireland and the U.S. have sought to use the deposition process to gain access to the Vatican records without success as the Vatican uses diplomatic immunity to prevent any investigation of its role in covering up clergy sex abuse. It will be interesting to see if the United Nations will have any greater success or even try to get the Vatican to comply with the Convention on the Rights of the Child. Wasn’t it Jesus who said "suffer the little children to come to me" and "what you do unto the least of mine, you have done unto me"? Who would have thought it would take the U.N. to get the Catholic church to listen?