There's a special place in hell for Roman Polanski

Adultery, even that of celebs like Letterman and Edwards, is a commonplace. But sex with underage girls is a crime 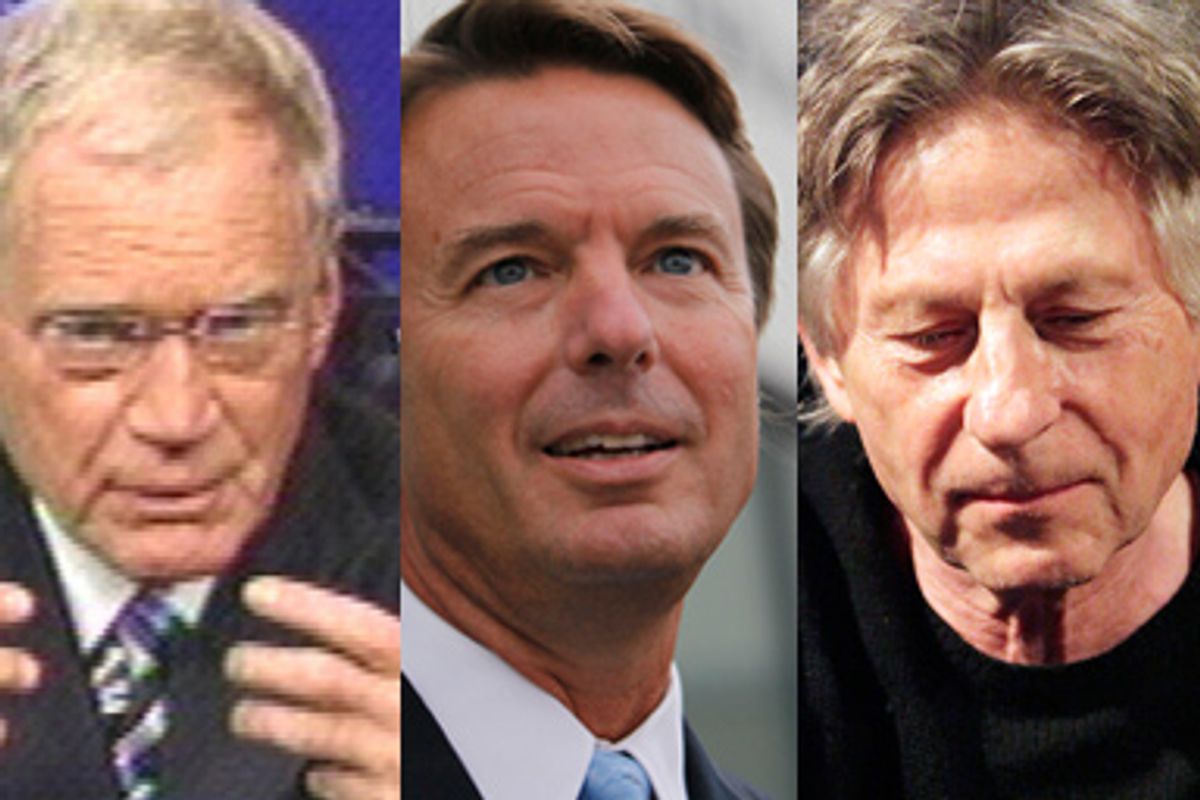 What would Americans talk about without celebrity sex scandals? It's getting to where even a diligent voyeur has trouble keeping the protagonists straight without schematic diagrams like the character lists in 19th-century Russian novels.

If adultery were a crime, a cynical homicide detective once told me, the prisons would be bigger than the graveyards. Even so, reveling in other people's sins has become the national pastime. We've become a country of Peeping Toms, a sadistic activity.

Recently, four separate sex scandals vied for the news consumer's attention: a film director, two prominent politicians and a TV comic. As usual, the unlucky lovers saw their privacy obliterated and their intimate lives rendered into moralistic fables. Whom the gods would destroy, they first make famous.

Everybody's least favorite character is French/Polish film director Roman Polanski. Except for a few Hollywood fools and European intellectuals who express the perverse belief that art excuses all crimes, hardly anybody would be upset to see Polanski go to prison. (In polls, ordinary Poles and Frenchmen reject the art alibi by large majorities.) As one who thinks his film "Chinatown" a masterpiece, I don't much care what happens to him.

Polanski's a one-dimensional villain to almost everybody except his 1977 victim, now a 45-year-old mother of three who's forgiven him. She thinks even the seven weeks he served undergoing psychiatric evaluation were excessive. Samantha Geimer has long argued that charges should be dropped.

Should her wishes be honored? Not necessarily. However, it also shouldn't be forbidden to wonder why she thinks that way. Wasn't her life irretrievably ruined by the famous director's crime? Evidently, Geimer doesn't think so.

It's also important to call things by their right names. Yes, it's illegal for an adult man to have sex with a 13-year-old girl; the slang term is "jailbait." (Remember Louisiana rock 'n' roller Jerry Lee Lewis and his 13-year-old wife being expelled from England?) But that doesn't make Polanski a "pedophile," i.e. a deeply disturbed person obsessed with pre-pubescent children. If I had my way, there'd be no need for a "Megan's Law" tracking paroled pedophiles, because there wouldn't be any parole. Ever.

Anyway, here's what the now-deceased judge who accepted Polanski's guilty plea said at the hearing: "The probation report discloses that although just short of her 14th birthday at the time of the offense, the (victim) was a well-developed young girl who looked older than her years; and regrettably not unschooled in sexual matters. She has a 17-year-old boyfriend, with whom she had sexual intercourse at least twice prior to the offense involved. The probation report further reveals that the (victim) was not unfamiliar with the drug Quaalude, she having experimented with it as early as her 10th or 11th year."

The child also apparently had the Stage Mother from Hell, a film industry tradition. In short, there may have been excellent reasons why both sides wanted to avoid a highly publicized Hollywood trial, and no reason to treat the grand jury testimony of a 14-year-old girl pressed by her mother and the prosecutor as holy writ. She may have interpreted Polanski's pleading guilty to a reduced charge as a kindness.

As for philandering politicians, here's all anybody ever needed to know about former senator and Democratic presidential candidate John Edwards: According to the New York Times, he once calmed his "anxious" mistress "by promising her that after his wife died he would marry her in a rooftop ceremony in New York with an appearance by the Dave Matthews Band."

Then there's GOP Sen. John Ensign, described by the same newspaper as a "silver-haired senator with a statesman's looks and family money -- his father helped found a Las Vegas casino -- (who) has championed conservative social values." So Nevada, whose two main industries are legalized gambling and prostitution, elects a casino heir who's also a professional Christian, and we're supposed to be shocked he turns out to be a conniving fraud?

Meanwhile, David Letterman, a then-unmarried TV comic, had love affairs at the office. This is news? Wake me if he runs off with Michelle Obama.