Time for the media to fess up

Journalists like Evan Thomas now admit the Clinton scandals were bogus. When will they admit they played along? 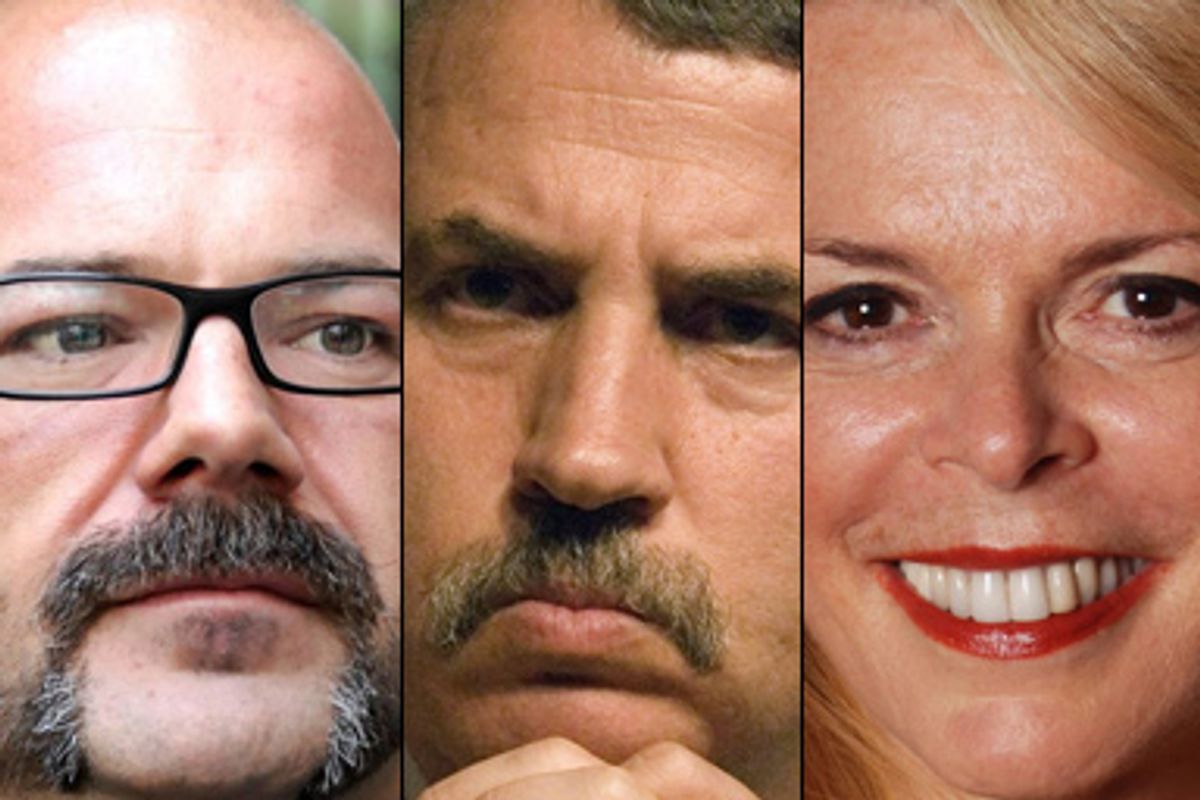 "Better late than never" isn't always true, but public candor from people and institutions that have misled us for many years can be refreshing -- and sometimes even liberating.

Prodded by recent events -- including publication of "The Clinton Tapes," historian Taylor Branch's fascinating account of his contemporaneous private conversations with President Bill Clinton; the unwholesome reappearance of healthcare reform nemesis Betsy McCaughey; and perhaps even the death of retired New York Times Op-Ed columnist William Safire -- certain media myth-makers of the Clinton era have suddenly uttered startling acknowledgments and even a grudging confession or two.

At this late date, it is scarcely radical to suggest that Whitewater and all the other "scandals" deployed by the Washington press corps to besiege the Clinton White House (before the Lewinsky affair) were without substance. In the pages of the New York Times and the Washington Post, which created and promoted those stories, even such media mandarins as Thomas Friedman and Evan Thomas now casually assure us that they were overblown, even "bogus." And former New Republic editor Andrew Sullivan today admits that the famous takedown of the Clinton healthcare reforms he published in 1994, Betsy McCaughey's "No Exit," was essentially a fake too.

Belated as those affirmations are, by more than a decade, they may still matter -- if only because they arrive at a time when the mainstream media is just beginning to descend into some of the same bad habits that plagued us during the last Democratic presidency and the far right is already talking impeachment.

Let us start with Friedman, who wrote a column on Sept. 30 bemoaning the diseased condition of political discourse in America and tracing the dangerous pathology back to its origin. "The right impeached Bill Clinton and hounded him from Day 1 with the bogus Whitewater 'scandal,'" he wrote. Presumably he used those scare quotes to suggest just how fraudulent the whole business was, as if "bogus" didn't quite do it -- and true enough, as far as it goes.

But it doesn't go far enough, because as Friedman knows very well, the right was not alone in hounding the Clintons -- and wouldn't have achieved traction without the journalistic assistance and moral support provided by the Times, the Washington Post, Newsweek, Time, the New Republic and the rest of Washington's press establishment, followed slavishly by their intellectual imitators on network and cable television.

Back then Friedman's own Times Op-Ed column rarely mentioned Whitewater or the Clinton scandals, but he remained agreeably silent while the most avid perpetrators of scandal nonsense, such as the late Safire and Maureen Dowd, transformed the paper of record into a megaphone for the president's adversaries. Unlike Anthony Lewis, who bravely argued with the harshly negative Times party line on Clinton and the scandals, the Pulitzer Prize-winning correspondent never wrote a word that could be construed as dissent. (Bob Somerby performed the Nexis search and offers much more on this subject in his trenchant Daily Howler commentaries.) Coming from him, "bogus" should be taken as a verdict not only on the scandals but on the scandal-mongering in the news, opinion and editorial columns of his newspaper -- and on his own failure to speak up when that might have made a difference.

Still, it is bracing to see that pithy epithet applied to the works of Kenneth Starr and the journalists who served as his lackeys in the Times' own pages. By comparison, Evan Thomas sounded squishy in his own recent belittling of the scandals, when he reviewed "The Clinton Tapes" for the Washington Post -- but then he has considerably more to answer for than Friedman.

Although he was trying no doubt to sound magisterial rather than mealy-mouthed, Thomas was unable to discuss past disgraces in any but the most indirect and evasive terms. Consider this passage, which follows a flip reference to Clinton's moaning and ranting in self-pity as he coped with the hostile press corps:

"Today, when the mainstream media seems so weakened, we forget how powerful -- and arrogant -- the New York Times and The Washington Post, along with the networks and news magazines, seemed to be in the early and mid-1990s. They were part of a giant scandal machine that dominated official Washington in the first few years after the Cold War. The endless string of special prosecutors and the media's obsession with Whitewater seem excessive in retrospect."

To some of us the obsession seemed excessive at the time, of course, which only enraged the likes of Thomas whenever we said so. (And isn't an obsession excessive by definition?) The true obsession among reporters was not the boring Whitewater land deal, as Thomas notes, but the "rumors of 'bimbo eruptions' floated by political enemies and less-than-reliable state troopers." Is he confessing his own fixation on Clinton's private life or merely recalling the unwholesome preoccupations of his colleagues?

Like all of them, Thomas certainly pretended to care about Whitewater, Travelgate, Filegate and all those other forgettable tall tales. What is remarkable now, however, is how smoothly he attempts to dissociate himself from the relentless scandal machine that he actually helped to operate. (Among his signed pieces, Thomas himself once wrote a fawning apology to Paula Jones that looks even sillier today than at the time he published it.) To put it bluntly, he served as a top editor at Newsweek when that periodical was Kenneth Starr's most favored outlet.

A low point was the magazine's December 1996 cover story, which dramatically featured the prosecutor's promise to "deliver" justice in five scandals supposedly percolating in the Clinton White House. With the "extraordinary access" provided by Starr, Newsweek declared breathlessly that within the coming months he would "decide whether to bring indictments that could very possibly alter the course of Bill Clinton's second term." A helpful sidebar on potential criminal acts attributed to the Clintons and their aides accompanied the exclusive Starr interview.

What Starr actually delivered, only eight weeks later, was his own resignation as special prosecutor -- to take a deanship at Pepperdine University (financed by Clinton nemesis Richard Mellon Scaife) in a deal that he had been negotiating for months. He had nothing, but he punked the Newsweek boys. (Under intense pressure from the right, notably the late William Safire writing in the New York Times, Starr quickly withdrew his resignation and continued as independent counsel until 1999.)

Finally there is Andrew Sullivan, whose disservices to journalism as editor of the New Republic were many and varied in the Clinton years, vicious in personal tone and ersatz in journalistic content. In April 1994, for instance, he published a highbrow version of "The Clinton Chronicles" titled "The Name of Rose," which portrayed Arkansas government as a third-world-style criminal enterprise directed by the Clintons with the connivance of the Rose Law Firm, Stephens Inc. and a supporting cast of shadowy, sinister Pakistanis and Indonesians. It was all nonsense but it played well in Washington's scandal culture -- and it gave respectable license to the Republican right's crusade to vilify the Clintons.

For Sullivan the high point of Clinton-bashing came with the publication of "No Exit," McCaughey's takedown of the new administration's healthcare reform proposals. Lately McCaughey has popped up again as the source of the fraudulent "death panel" allegations against President Obama's healthcare reform plan -- and that in turn has revived scrutiny of the myriad inaccuracies and blatant falsehoods in her 1994 New Republic article (which the magazine's editors have disowned).

Having boasted proudly that by publishing McCaughey he helped to destroy the Clinton plan, and having accepted a National Magazine Award for doing so, Sullivan now says he is sorry about all that. He professes to take "full responsibility" for publishing an article that he knew to be false in its particulars and its broader argument -- but, in fact, smarmily seeks to blame someone higher up (in addition to McCaughey herself) who supposedly forced him to run the piece. That would have to be Martin Peretz, who then owned the New Republic and advertised himself as "editor in chief."

If what Sullivan says is true, then the least he and Peretz should do is return the National Magazine Award, for the sake of the journalists and editors who have honestly earned that prize. That gesture might restore a semblance of sanity to the debate over healthcare.

As for the responsible parties at the Times, the Post, Newsweek and all the others, like Friedman and Thomas, who feel residual guilt over the Clinton scandals, there is still time to confront the past honestly. Fessing up is hard to do. But at a moment when the New York Times and the Washington Post again seem eager to grovel to the far right, it is worth recalling where that same impulse led during the Clinton years.