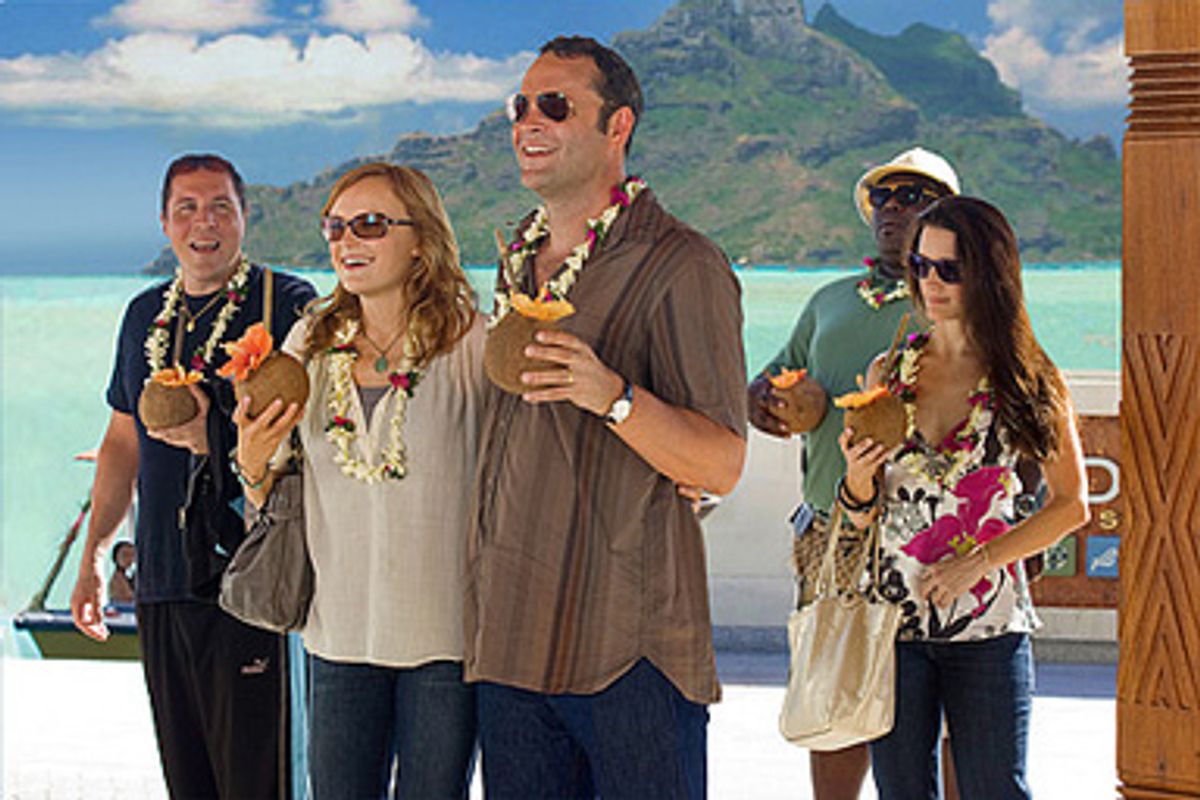 "Couples Retreat" begins with an adorable blond tyke peeing the bed and ends with the same kid taking a dump in a home-remodeling store. In between, four couples, including the exhausted parents of the aforementioned hellion, squabble (or don't), wrestle with their problems (or don't), and have sex. No, scratch that one -- no one in "Couples Retreat" is getting his or her groove on, which is one way the movie strives for a semblance of realism even as it reaches, desperately, for laughs.

But "Couples Retreat" is neither funny nor honest. The exact opposite of a retreat, it's merely exhausting. The director is actor and former child star Peter Billingsley (he played Ralphie in "A Christmas Story"); the script is by Jon Favreau, Vince Vaughn and Dana Fox -- Favreau and Vaughn star in the picture as well. The story alone sounds promising enough: A couple that's been having trouble conceiving (played by Jason Bateman and Kristen Bell) find themselves on the verge of breaking up. As a last-gasp effort, they book themselves and three other couple-friends into a swanky tropical resort that offers "couples skill building" as a supposedly optional activity. One couple (Vince Vaughn and Malin Akerman) is reasonably happy; another (Jon Favreau and Kristin Davis) is desperately unhappy; and one set (Faizon Love and Kali Hawk) isn't even married -- she's the 20-year-old rebound girlfriend he recently started dating after his divorce.

The setups are fairly predictable, which doesn't mean they don't have the potential to be funny: Vaughn, during a "couples skill building" exercise, is almost bitten by a shark and uses this faux drama as a way to get extra attention; Favreau, desperate to have sex (it's been ages), tries to manufacture excuses to get himself over to the "singles" side of the resort, where everyone is drinking and partying and having a grand old time. But the gags go nowhere, sputtering out before they even get going. And while the women are appealing enough, they don't have much to do here. Even Davis, who was one of the best reasons to watch "Sex and the City" in its later episodes, is wasted (though she does have some silly moments with a salacious, Fabio-look-alike yoga instructor, played by Carlos Ponce).

One of the problems with "Couples Retreat" is that we know at the very beginning how it's all going to end: Each member of each of these couples is going to realize that he or she already has the perfect mate. That would be OK, if all of these couples consisted of people who actually seemed to like each other. At least two of these couples are so filled with bitterness -- either on the surface or teeming beneath -- that it's easy to believe they might be better off splitting up. Instead, the movie has to manufacture facile resolutions for all of them. And sometimes real life is funny, even when it stings. But "Couples Retreat" doesn't have the courage to head down that road.

The funniest people in the movie are the supporting players: Jean Reno shows up, wrapped in flowing robes, as the resort's marriage guru -- his self-serious swanning about is good for at least one laugh. Then there's Peter Serafinowicz, as the resort's official greeter and taskmaster. When the guests first arrive, he addresses them somberly in a note-perfect, upper-crusty English accent that's at odds with his pastel-blue Sta-Prest safari shirt. "My name is Stanley," he informs them, before adding the kicker, "spelled with a 'c.'" That's one of the few moments "Couples Retreat" cuts loose and feels free. The rest of the time, it's the comedy equivalent of a ball and chain.