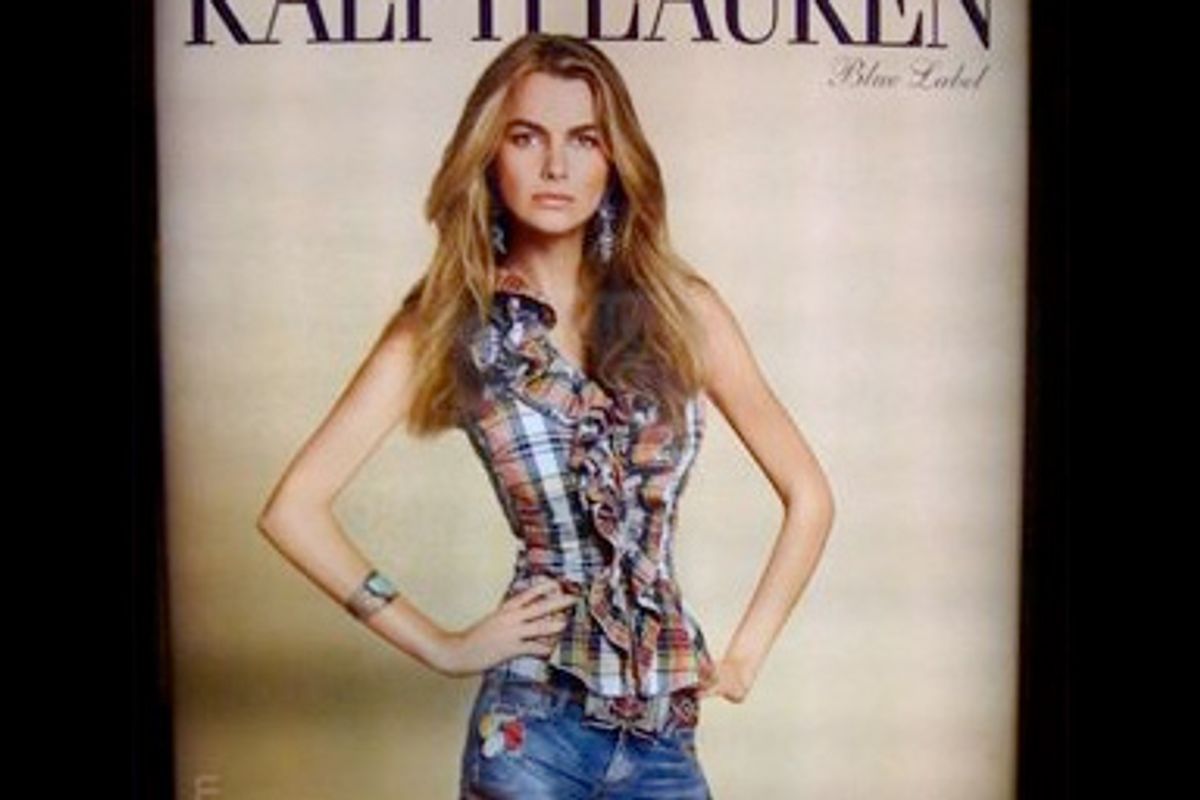 If you were starting to get all excited about magazines vowing to use "normal" size models, or designers sending plus-size women out on the runway, or size-12 Crystal Renn getting high-fashion work that would normally go to a much thinner model, you need only visit the blog Photoshop Disasters for a reality check regarding just how bad things remain. The digital slimming and elongating (not to mention disfiguring) of already tall and thin models continues apace.

Recently, Photoshop Disasters highlighted a Ralph Lauren ad in which a model was reduced to the point where, as the blogger pointed out, her head was bigger than her pelvis. Xeni Jardin reproduced the image in a post at Boing Boing with the brilliant title "Ralph Lauren opens new outlet store in the Uncanny Valley" -- only to be slapped with a DMCA takedown notice from Lauren's lawyers, claiming copyright infringement. (It almost certainly wasn't; fair use allows for the reproduction of an image for comment or criticism.) Boing Boing editor Cory Doctorow then wrote a post explaining:

One of the things that makes [Boing Boing's ISP] Priority Colo so awesome is that they don't automatically act on DMCA takedowns. Instead, they pass them on to us and we talk about whether they pass the giggle-test.

So, instead of responding to their legal threat by suppressing our criticism of their marketing images, we're gonna mock them.

And mock they did. Later, Mark Frauenfelder considered the possibility that the Photoshop job was a malicious prank Lauren and company never approved, but still wondered, "If the photo was manipulated after it appeared in the advertisement, why didn't Ralph Lauren's law firm make mention of that in their silly DMCA takedown notice?"

Because that wasn't the case, as it turns out. On Thursday, Polo Ralph Lauren released a statement saying, "For over 42 years we have built a brand based on quality and integrity. After further investigation, we have learned that we are responsible for the poor imaging and retouching that resulted in a very distorted image of a woman's body. We have addressed the problem and going forward will take every precaution to ensure that the caliber of our artwork represents our brand appropriately."

Eh, I'll give 'em a few golf claps for that, I guess -- only for being just savvy enough to recognize that they lost the P.R. war and needed a new strategy. It fascinates me to see how quickly corporations do or do not catch on to how word of mouth works in the age of social media, and/or how counterproductive it can be to bully bloggers to shut up, rather than simply admitting a mistake. If Polo Ralph Lauren had issued that statement immediately, it actually would have balanced out the negative impression that ad gave me of its company, because I can easily see how something like that could go out into the world without higher-ups' knowledge -- but I certainly cannot see how anyone could ignore or attempt to justify it once it's pointed out. Instead, the company's first response was an old-fashioned attempt to shut down criticism, cover up the major goof, and hope few people ever heard about it and the rest would forget. That's not how it works these days, when ordinary consumers finally have a potentially enormous platform for publicly airing grievances, and Polo Ralph Lauren's failure to recognize that change has damaged the brand's image in my mind a lot more than the disastrous Photoshop job did.