Washington's revolving doors are bad for your health 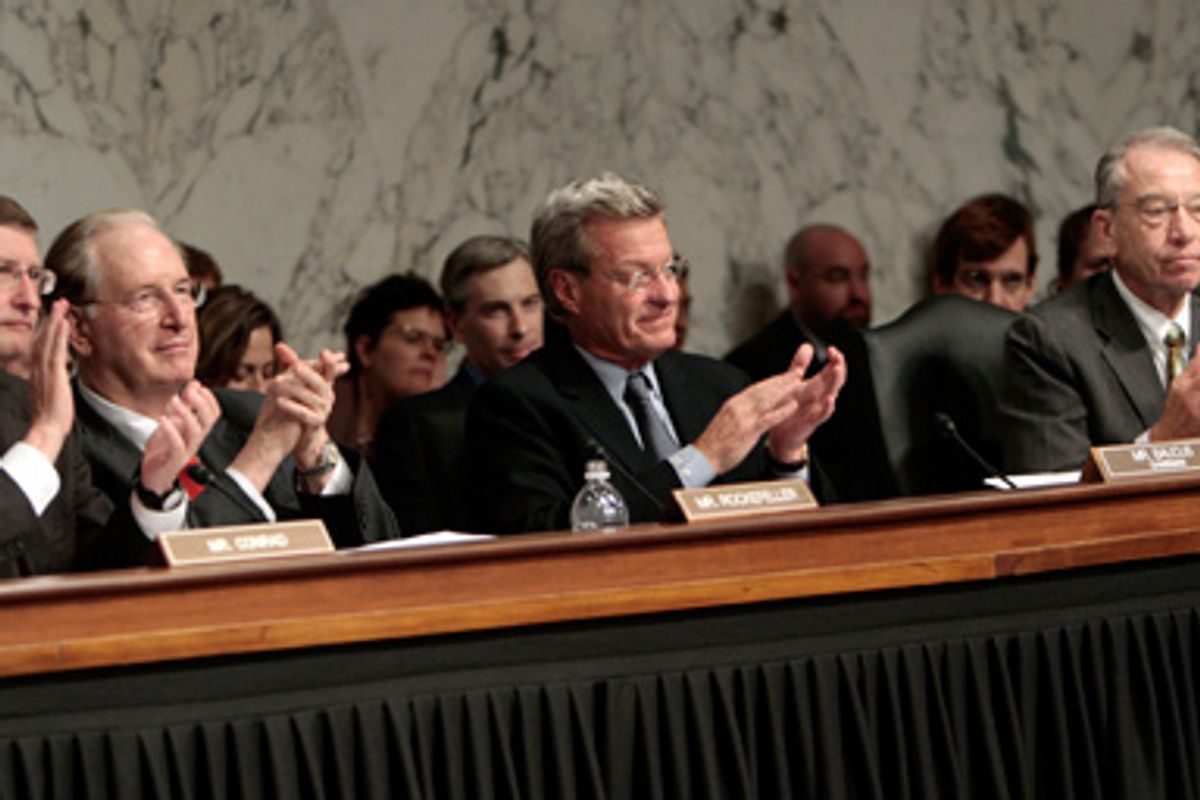 From left to right, Sen. Kent Conrad, D-N.D., Sen. Jay Rockefeller, D-W.V., Chairman of the Senate Finance Committee Sen. Max Baucus, D-Mont., and Sen. Chuck Grassley, R-Iowa, applaud as they near the conclusion of a hearing on heath care reform legislation on Capitol Hill in Washington, in the early morning hours of Friday, Oct. 2, 2009
--

On Tuesday, Oct. 13, the Senate Finance Committee finally is scheduled to vote on its version of healthcare insurance reform. And therein lies yet another story in the endless saga of money and politics.

In most polls, the majority of Americans favor a nonprofit alternative -- like Medicare -- that would give the private health industry some competition. So if so many of us, including President Obama himself, want that public option, how come we're not getting one?

Because the medicine that could cure our healthcare nightmare has been poisoned from Day One -- fatally adulterated, thanks to the infamous, Washington revolving door. Movers and shakers rotate between government and the private sector at a speed so dizzying they forget for whom they're supposed to be working.

Fowler used to work for WellPoint, the largest health insurer in the country. She was its vice-president of public policy. Baucus' office failed to mention this in the press release announcing her appointment as senior counsel in February 2008, even though it went on at length about her expertise in "healthcare policy."

Now she's working for the very committee with the most power to give her old company and the entire industry exactly what they want -- higher profits -- and no competition from alternative nonprofit coverage that could lower costs and premiums.

A veteran of the revolving door, Fowler had a previous stint working for Sen. Baucus -- before her time at WellPoint. But wait, there's more. The person who was Baucus' top health advisor before he brought back Liz Fowler? Her name is Michelle Easton. And why did she leave the staff of the committee? To go to work -- surprise -- at a firm representing the same company for which Liz Fowler worked -- WellPoint. As a lobbyist.

You can't tell the players without a scorecard in the old Washington shell game. Lobbyist out, lobbyist in. It's why they always win. They've been plowing this ground for years, but with the broad legislative agenda of the Obama White House -- healthcare, energy, financial reform, the Employee Free Choice Act and more -- the soil has never been so fertile.

The healthcare industry alone has six lobbyists for every member of Congress and more than 500 of them are former congressional staff members, according to the Public Accountability Initiative's LittleSis database.

Just to be certain Congress sticks with the program, the industry has been showering megabucks all over Capitol Hill. From the beginning, they wanted to make sure that whatever bill comes out of the Finance Committee puts for-profit insurance companies first -- by forcing the uninsured to buy medical policies from them. Money not only talks, it writes the prescriptions.

In just the last few months, the healthcare industry has spent $380 million on lobbying, advertising and campaign contributions. And -- don't bother holding onto your socks -- a million and a half of it went to Finance Committee Chairman Baucus, the man who said he saw "a lot to like" in the two public option amendments proposed by Sens. Rockefeller and Schumer, but voted no anyway.

The people in favor of a public alternative can't scrape up the millions of dollars Baucus has received from the health sector during his political career. In fact, over the last two decades, the current members of the entire finance committee have collected nearly $50 million from the health sector, a long-term investment that's now paying off like a busted slot machine.

Not that we should be surprised. A century ago, muckraking journalists reported that large corporations and other wealthy interests virtually owned the United States Senate -- using bribery, fraud and sometimes blackmail to get their way. Jokes were made about "the senator from Union Pacific" or "the senator from Standard Oil."

One reporter in particular was out to break their grip. His name was David Graham Phillips. One day in 1906, readers of Cosmopolitan magazine opened its March issue to discover the first of nine articles by Phillips titled "The Treason of the Senate."

He wrote, "Treason is a strong word, but not too strong, rather too weak, to characterize the situation which the Senate is the eager, resourceful, indefatigable agent of interests as hostile to the American people as any invading army could be, and vastly more dangerous: interests that manipulate the prosperity produced by all, so that it heaps up riches for the few; interests whose growth and power can only mean the degradation of the people, of the educated into sycophants, of the masses toward serfdom."

The public outrage provoked by Phillips and other muckrakers contributed to the ratification of the 17th Amendment to the Constitution, providing for the direct popular election of senators, who until then were elected by easily bought-off state legislators.

Of course, like water seeking its own level, big money finds its way around every obstacle, and was soon up to its old tricks, filling the pockets of sympathetic and grateful politicians.

Today, none dare call it treason. So why not call it what it is -- a friendly takeover of government, a leveraged buyout of democracy.

Outrageous? You bet. But don't just get mad. Get busy.