Drop the soap! These abusive but self-doubting lotharios are only getting funnier with age 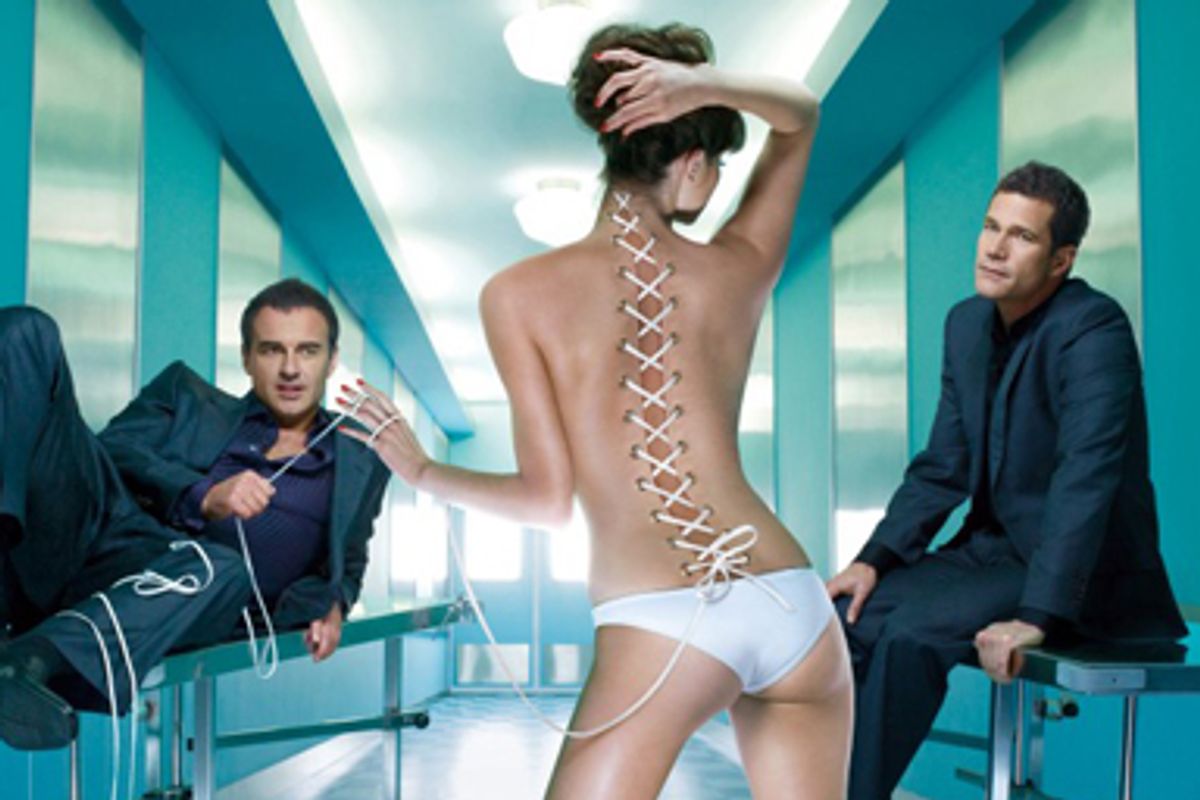 Am I good enough? Pathetic though it may be, this is the haunting question of adulthood. Shouldn't I be a better parent? Shouldn't I be more ambitious? Shouldn't I contribute more meaningfully to society? Shouldn't my house be a lot cleaner? Shouldn't I look a lot better? And, most important: How much caffeine will I have to ingest to achieve all of the above?

All of this questioning can make me long for the sociopathic days of my youth, when I cast aside notions of my own responsibilities in favor of questions like: What's his problem? What's her point? Why isn't he in love with me, when I'm obviously delightful? Am I drunker than everyone else here?

Strangely, I still wake up feeling confused and exhausted just as often.

Am I good enough? Obviously not. Where's the coffee?

The insecurity of adulthood looms around every corner this season on "Nip/Tuck" (premieres 10 p.m. Wednesday, Oct. 14, on FX), a show that has reinvented itself more times than most of the plastic surgery addicts who frequent the offices of McNamara/Troy. After all, since its first season back in 2003, "Nip/Tuck" has been, at various times, a medical soap, a melodrama and a murder mystery. But based on the unexpected hilarity of this Wednesday's season premiere, "Nip/Tuck" probably should've been a comedy all along.

No, it hasn't been a comedy all along -- don't even try. With all of the psychobabble and shouting and gratuitous gore and nastiness, every halfhearted chuckle and surreal twist on this show has always been overshadowed by a predominant feeling of depression and doom. Playboy plastic surgeon Christian (Julian McMahon) is a self-centered sociopath, after all. Sean (Dylan Walsh) is a self-pitying, self-deluded jerk. On the surface, they look like a pair of master manipulators, but once you get to know them a little better, they're both just sad little boys, easily controlled by their greed and their libidos.

That's not to suggest that these are rich, interesting characters. Unfortunately, these two have all the depth and layers of young children. What's his problem? What's her point? They ask themselves. Why isn't she in love with me, when I'm obviously delightful? Am I drunker than everyone else here? Thankfully, though, this season, they're realizing that being self-involved isn't nearly as sexy when you're in your 40s.

Despite its glossy exterior and moderately intriguing premise, "Nip/Tuck" has always lacked nuance. The dialogue typically alternates between coy banter and outrageously overstated, repetitive, melodramatic tripe, with characters who confess their hatred for each other and then admit their lust for each other in every other scene. The situations and stories are largely cartoonish, but they're often too disgusting or harsh or pathetic to be amusing.

Take this scene from the first season, in which Christian tells Kimber what she needs to be a perfect 10. Obviously it's absurd, but it ends on a truly ugly note. What if it were funny instead? The jokes are all in there already; what feels sour is that, thanks to the suspenseful music and Kimber's unraveling and Christian's smug puppet master routine, it lands in the realm of: Bleccch. Get me away from these people.

Now swap in some different music, a few wisecracks and a punch line, and this scene could actually be entertaining. It doesn't need that much levity, it just needs to take itself much less seriously.

But the writers of "Nip/Tuck" have always been too attached to romanticizing these deeply cynical heroes, as if we're sadistic enough to want to watch them feed on the insecurities of others over and over again. We're supposed to see them as survivors and pragmatists in a deeply sick world, roaches who can wriggle out of any bind; we're supposed to feel sorry for them, sure, but we're also supposed to get a vicarious thrill from their swaggery, semi-abusive ways. How else do you explain a scene like this one between Christian and his conquest of the moment, Gina? (There's a scene like this in at least every other episode of the show.)

Maybe the real problem is that they're comedy writers, yearning to breathe free: Wednesday night's premiere demonstrates just how good "Nip/Tuck" would be if it dropped the parade of bleak stories and became a dramedy overnight. From the droll voice-over to the steady flow of absurd scenes where Sean and Christian realize that they're no longer the rich, young, carefree men they used to be, this episode is a gem that anyone, fan or not, could enjoy.

Take the ridiculous scene between Sean and Christian and their son, Matt (Sean's kid who he eventually discovers is Christian's biological son -- yes, exactly the sort of stupid plot twist that has made this show crappy). Matt (John Hensley), who has always haunted Sean by being the most nightmarish and irritating teenager ever, is explaining why he's blowing a huge pile of cash on a workshop with a master mime.

"Look, you know how they say when you find your bliss is when the money starts rolling in? Well, I think I've found it," he tells them. "Mime is so amazing, man. It takes us beyond our petty egos, beyond language, and unifies us! It's a great art form, OK? The pure, universal language of gesture!"

Christian isn't having any of this. "Listen, Boxcar Willie," he tells him. "We can rent your room, OK? So you either kick in, or you're out by the first. So get off your unicycle or whatever the hell it is that mimes drive these days and get a real job."

"You know, it's a waste of time trying to share anything with you two," Matt says, storming out.

The whole episode continues along these lines, from Sean and Christian's sudden business partnership with much younger, more fit, more successful plastic surgeon Mike (played brilliantly by an oft-shirtless Mario Lopez), to their decision to begin offering vaginal reconstruction as a means of saving their business, which has been hit hard by the recession.

"This simple outpatient procedure restores the architectural integrity of the vagina," Christian smilingly explains in their brand-new infomercial. See how a line like that is depressingly repugnant on a show that paints Christian as the flawed but charming lady-slayer, but it actually works on a great big foolish farce where Christian is just another over-the-top parody of macho self-delusion?

Maybe the success of "his other show, "Glee," has alerted Ryan Murphy to the fact that comedy is his one true calling. If "Nip/Tuck" were a dramedy, after all, all of these flat characters could drop the pointless conflict and angry outbursts -- which is about as intriguing as watching children push each other down in the sandbox -- and focus instead on absurdity, farce and flights of fancy.

Sadly, the second episode of "Nip/Tuck" has none of the laughs and excitement of the first, but the eerie, uncomfortable, dumb-teenager darkness of the previous five seasons is back. Why? Why do the writers insist that we take Sean's stupid affair with a self-injuring, pill-popping psycho seriously? Why do we have to meet yet another deeply unhinged teenager with parents who just don't understand?

Obviously shows like "Six Feet Under," "Deadwood," "True Blood" and "Dexter" prove that darkness can work just fine, as long as we're not asked to believe the unbelievable, or to cheer on the unlikable. "Nip/Tuck" has never found a way to make its unbelievable, unlikable characters worthwhile -- until now.

You know how they say when you find your bliss is when the money starts rolling in, Mr. Murphy? Comedy is so amazing, man. It takes us beyond our petty libidos, beyond crappy dialogue, and unifies us! It's a great art form, OK? The pure, universal language of humor!

Of course, what you really want to know is: Are you good enough? No, not yet. Now get back to work.