Michelle Obama: What a doll!

Will the first lady's own action figure bug her as much as Sasha's and Malia's did? 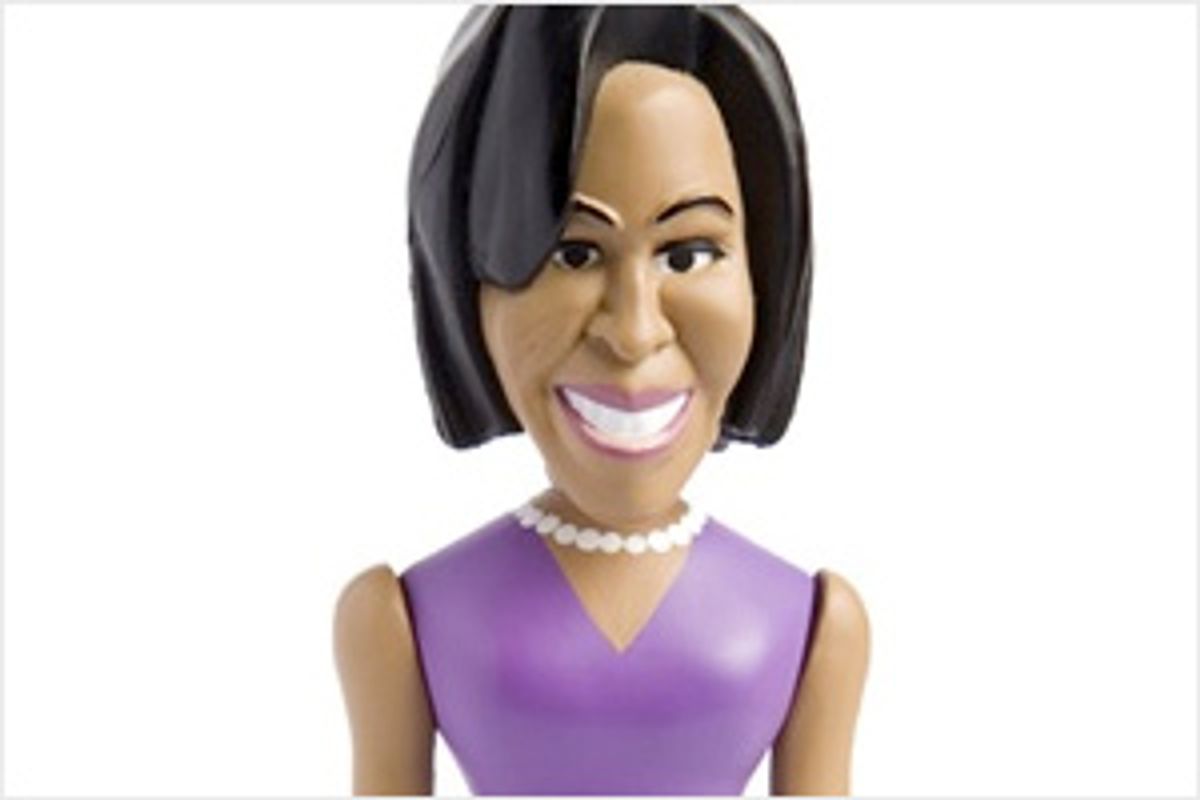 Early this year, right around inauguration time, Ty Inc. (yes, the Beanie Babies brand) decided to capitalize on the popularity of our new first family by naming two of its dolls "Sweet Sasha" and "Marvelous Malia." Although the girls were only 7 and 10 years old when their Ty Girlz counterparts went on sale, Packaging Girlhood noticed that the dolls had breasts -- just like the "Britney" and "Lindsay" figures that were also part of the brand's teen line. And guess what? Mama Michelle was not happy to see her daughters' names on a pair of Bratz clones. "We feel it is inappropriate to use young, private citizens for marketing purposes," said her press secretary, in a statement.

After that backlash, it takes some chutzpah to sell a doll not only named after, but intended to represent, the first lady herself. But that's exactly what Jailbreak Toys -- a company that already sells a Barack Obama action figure -- plans to do. As the New York Times reports, the 6-inch plastic Michelle goes on sale Nov. 20 and comes in three versions, each with a different outfit: "a purple V-neck sheath from the famous fist bump, a black-and-white floral from her appearance on 'The View,' and a red-and-black frock she wore on election night." In an interview with the Times, the toy's designer, Jason Feinberg, said of Michelle, "She’s got a totally different sense of style than we’ve ever seen from a first lady." And the company deliberately chose three sleeveless dresses to highlight her much-debated "right to bare arms." (Honestly, I'm kind of encouraged that Jailbreak didn't feel the decision would be controversial enough to stop people from buying the dolls.)

Perhaps out of fear of a negative reaction, the company has filled its Michelle marketing copy with over-the-top praise: "If there’s one person in America who has captured the public's imagination even more than Barack Obama, it’s his wife Michelle." Huh. I mean, I love Michelle and all ... but isn't selling her as even more fascinating than the leader of the free world a bit much? There's even some breezy, feel-good feminism in the mix. "Just like in real life, the Michelle Obama Action Figure isn't simply [sic] be a female counterpart to Barack," says Jailbreak. "She’s her own lady with her own style and energy and, of course, her own fashion sense." (Hey, aren't "style" and "fashion sense" a bit similar? Isn't there anything else worth celebrating about Michelle?) The product's disclaimer is straight out of Brownnosing 101: "This product is not formally endorsed by or affiliated with Michelle Obama. (But we really hope she likes it.)"

And it's possible Jailbreak's fawning is working. "The White House said it had no comment Monday in response to the upcoming release of a new Michelle Obama action-figure doll," CNN reports. So, assuming it wasn't her packed schedule of actually important obligations that stopped Mrs. O from speaking out, why should her own action figure bug her any less than her daughters' dolls? Well, for one thing, her doll is a more straightforward tribute; Ty was significantly less above-board about the intentions behind its design and marketing of Sweet Sasha and Marvelous Malia. Back in January, the Washington Post noted, "The company, which is based in Oak Brook, Ill., has said the dolls are not made to be exact replicas of the first couple's daughters and are not based on the Obama girls." But perhaps the most important difference to remember here is that Michelle is an adult who has chosen to remain in the public eye in support of her husband's presidency. And that makes her -- unlike her minor daughters -- fair game.