High-fiving 40-year-olds? Get out of "Cougar Town"!

Why has Courteney Cox's painfully manic midlife-crisis sitcom been embraced by fans and critics? 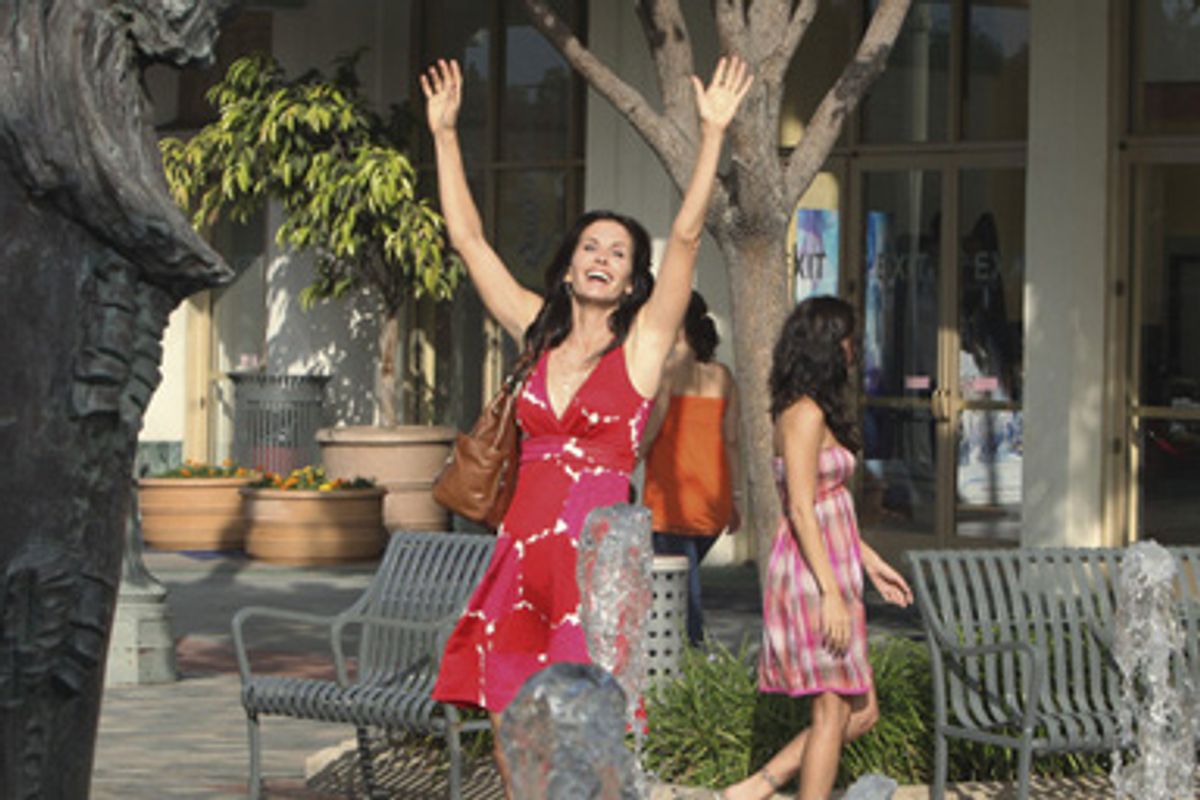 If aliens learned about our culture by watching our newest television shows, they might assume that planet Earth was terrorized by predatory middle-aged women with hairless, bony bodies and the same blank expression on their overly Botoxed faces, a look of creepy awe at the joys of 20-something tenderloin.

"They're addicted to those botulism injections, which make them jittery and sick," the aliens might hypothesize after watching shows like "Cougar Town" and "Eastwick" and "Accidentally on Purpose." "Their lives are so addled by substance abuse that they pace and second-guess themselves with their googly-eyed, like-minded friends, then giggle and high-five like schoolgirls at the sight of some well-defined abdominal muscles, which are apparently a sign of inner purity."

"Why don't the other humans just snuff them out?" some young alien would interject, but no one would answer him because in the galaxy of Zoron, young men are seen as hopelessly naive and confused and are generally ignored until they hit 35. Besides, all of the older aliens would already recognize that these "cougars" clearly serve as some sort of cautionary tale for female humans, a moralistic narrative that humans refer to, strangely enough, as a "guilty pleasure"  -- "guilty" in this case meaning "it makes you want to stick your head in the oven" and "pleasure" referring to the feeling humans get from having their fingernails ripped off one by one.

What else can explain the surge of good feelings welling up around Courteney Cox's abjectly awful new sitcom "Cougar Town" (9:30 p.m. Wednesdays)? While ABC's "Eastwick," based on the 1987 movie "The Witches of Eastwick" and the John Updike novel before it, and CBS's "Accidentally on Purpose," a sitcom with Jenna Elfman as a late-30s writer knocked up by a 20-something stud, have both been greeted with lukewarm reviews and middling ratings, "Cougar Town" has been lauded as an "unfailingly funny" delight by fans and respected critics alike. On Tuesday, ABC picked up the show for a full season, and announced that the always funny Rachael Harris will take a recurring role as Cox's new rival.

Now let's be clear: This show isn't awful merely because it's disconcerting to see a fit, healthy, 40-year-old woman depicted as a prowling old cat -- no, that part, although unrealistic, might be funny under the right circumstances. Sure, the aliens might find it curious that while Cox winces and makes "silly me" faces over her shameful sexual urges while men Cox's age and older -- George Clooney, Brad Pitt, Alec Baldwin -- are seen as having reached the peak of their sexual appeal, but no matter. That's one for the earthling sociologists to sort out.

No, what makes "Cougar Town" -- and to a lesser extent, "Accidentally on Purpose" and "Eastick" -- so bad is that we're supposed to find these mincing, wincing, mediocre women so charming. Even though most of them appear to have been injected and spot-toned to the point of being exact replicas of their 20-something selves, we're still supposed to believe them when they whine about how ugly and old and hideous they feel. Even though they're mature adults, we're still supposed to think it's cute when they get all crumply and disillusioned and then rally a cheering section around them, because they have the arrested identity development and porous ego boundaries of junior high school girls. And while we're meant to find their bikini waxing appointments and their sporting of sexy lingerie hilariously distasteful, as if it's hopelessly indulgent to do much more than clip coupons and circle the drain when you're over 35, we're still supposed to cheer them on when they throw back Jagermeister shots and ogle young studs and screech at each other like coeds at a kegger. Ah, if only we, too, could slip back into the sweet, dizzying folds of aimless, beery banter and meaningless one-night stands with clumsy, baseball-cap-sporting bobbleheads!

But let's not get too lathered up around the sheer ludicrousness of the cougar meme. The real crime here is that despite the mind-swelling lameness of "Cougar Town" -- which is far, far worse than the occasionally amusing "Accidentally on Purpose" and the dull but relatively innocuous "Eastwick"-- the show has been proclaimed riotously funny and hopelessly addictive.

Addictive the way dropping an anvil on your big toe is addictive? Because not only does Jules spend most of her time on-screen in a hunched-over, wild-eyed state, like a street mime trying to convey panic, she's mostly panicked about how she looks. From the first scene of the series, where we find Jules pinching the loose skin on her elbow disapprovingly, all Jules can talk about is how hard it is not to look disgusting at her age.

"Why are you wearing full makeup?" asks Jules' neighbor friend, Ellie (Christa Miller), when she visits Jules at dawn.

"I'm not ready for Josh to see my morning face. So I set two alarms, one at 4 and one at 5. Then I get up and do my hair and makeup, I go back to bed, fake sleep until the next alarm goes off, and then he thinks I wake up looking like this!"

Later in the same episode, Jules runs through a water fountain, then exclaims, "I spent so much time on my hair this morning. That felt like cheating death!" Yes, this is today's version of Mary Tyler Moore: not throwing her hat into the air to celebrate her life as a career girl but running through a fountain to celebrate the sheer time-suck that is her high-maintenance beauty regimen.

Next, here's Jules, breathlessly announcing before she takes a bite of bagel, "This will be my last bite of food today so that my stomach looks super-flat tonight!" Aw, what's cuter than a middle-aged woman with an eating disorder?

Here's what the creators of "Cougar Town," Bill Lawrence and Kevin Biegel, think is cuter: Watching Jules dashing in circles, doing sit-ups, spritzing herself with perfume, worrying out loud that she's not good enough in bed. "We're 40, Laurie," Jules snaps at her younger friend. "For us getting ready for sex is like prepping for a space mission."

Yes, and tuning in for "Cougar Town" is like watching a sci-fi horror flick about a 40-year-old woman who wakes up one morning with the brain of a 13-year-old. Although Billie (Elfman) of "Accidentally on Purpose" occasionally jokes about the side effects of pregnancy -- giant boobs, "sexy hot feelings and one's booty becoming bootylicious," and "happy feelings in my downstairs area" -- at least she doesn't prattle on about whether or not baby pee makes your skin softer (thank you again, Jules). And instead of worrying about her sexual performance post-coitus, Billie growls, "Oh, I'd kill for a meatball hero."

But talk of meatball heroes doesn't exactly make ratings soar the way jokes about blow jobs do. And even though, in theory, the idea of a show about middle-aged women partying like rock stars, chasing hot younger men, and then second-guessing themselves about it afterward doesn't sound all that bad, "Cougar Town" is that bad -- and then some. As obnoxious as it is tone-deaf, the show can be adequately summed up by the scene where Barb, Jules' older colleague, goes to see a bikini waxer.

"I know you're probably impressed with what you see," Barb tells the woman solemnly. "That, Carol, is total rejuvenation surgery. Up here, I'm 48. Below the belt, I'm 19. Now let's detail this Ferrari."

Blecch. But ultimately, the subject matter isn't the problem. In one memorable scene from the first season of "The New Adventures of Old Christine," a far more enjoyable look at the perils of middle-aged divorcees on the rebound, Christine (Julia Louis-Dreyfus) waves off Brazilian waxes, saying, "I did that once, and it was like a hair arrow pointing to my C-section scar."

See? A joke women can laugh at without feeling dirty inside. Louis-Dreyfus on "Old Christine," Tina Fey's Liz Lemon of "30 Rock," Holly Hunter on "Saving Grace" -- there are plenty of fantastic late-30-something and 40-something female characters on TV who greet the perils of middle age with self-deprecating humor. So why do audiences rally around the one show that makes turning 40 look like a life sentence at a sadistic day spa/asylum/penitentiary for the self-obsessed? Maybe we're all just as masochistic as Jules.