Why the Berlin Wall fell 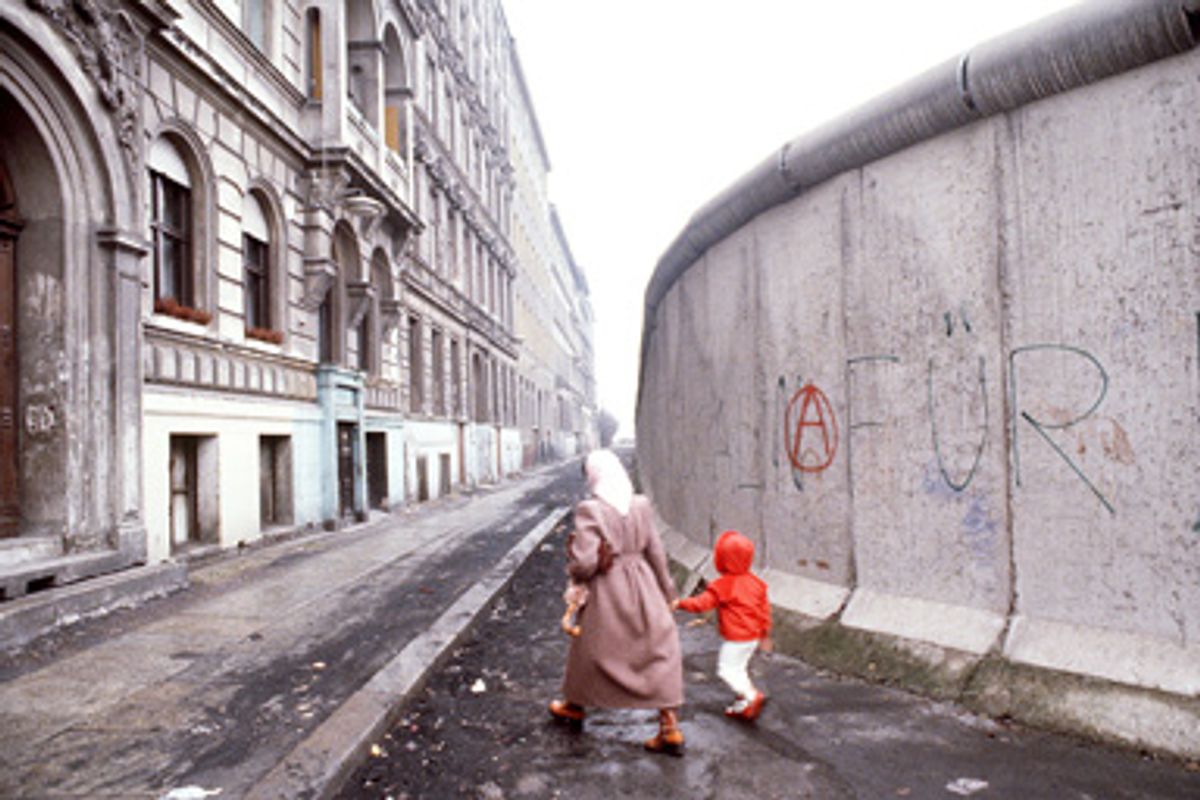 When the Berlin Wall fell 20 years ago this November, it seemed, from the outside, to have simply melted away like the Wicked Witch of the West after a good dousing. Like the witch, the Soviet Union and its Eastern bloc had appeared to be an implacable and wily adversary, an aspect of modern life as inevitable as death and taxes. But Dorothy's astonishment at discovering that a mere pailful of dirty water had foiled her nemesis was nothing compared to that of the average Westerner upon seeing the Wall crumble for, it seemed, no reason at all. Suddenly, television was filled with images of mobs of East Germans dancing on the concrete monolith that, a few weeks earlier, they couldn't even approach without being gunned down. Not a drop of blood had been shed. How did that happen?

Stephen Kotkin, a professor of history at Princeton University and the Woodrow Wilson School, has written (with a contribution from Jan Gross, also a professor of history at Princeton) an account of just that, a version that briskly dispenses with several currently popular theories. "Uncivil Society" reprises arguments in Kotkin's acclaimed 2001 book about the dissolution of the USSR, "Armageddon Averted," but with even more concision. ("Armageddon Averted" was only 300 pages long; the narrative portion of this book clocks in at half that.) The history of the Cold War -- especially on the Soviet side -- often seems a soporific chronicle of dull, gray men in dull, gray suits hammering out dull, gray and largely incomprehensible treaties while dictating production quotas. Kotkin proves that this story, the epochal global event of our time, can be made fascinating when described with vigor, clarity and a cobweb-slicing scorn for cant and obfuscation.

"Uncivil Society" examines the end of Soviet-style socialism in three exemplary bloc states: East Germany, Romania and Poland. Kotkin complains that on this subject most analysts "continue to focus disproportionately, even exclusively, on the 'opposition,' which they fantasize as a 'civil society.'" With the exception of Poland, where the Solidarity movement constituted a real counterpart to the Communist regime, this notion of a valiant resistance who modeled a better order and spearheaded the mass uprisings of 1989 falls, in Kotkin's view, "into the realm of fiction." And, while he credits the West for its "steadfast" containment of the Soviet Union ("whatever the mistakes and excesses"), Kotkin doesn't seem to regard direct Western action as a significant cause of the collapse of the USSR, either. Instead, he views the whole thing as an "implosion"; the Soviet-style establishments ("uncivil societies") simply gave up the ghost -- in some cases even helping the dissolution along.

Why would any group in possession of so much power, enjoying privileges denied to the hoi polloi, willingly surrender? As Kotkin sees it, they were terminally demoralized. The Soviet bloc elites had promised (and, he insists, mostly believed) that Communism would provide a better alternative -- a living, breathing reproach to the ruthlessness of capitalism. Forced to scrape by alongside booming postwar Western economies, the Communist states (particularly East Germany) had their noses rubbed in their failure on a daily basis. Media, from Western propaganda efforts like Voice of America to TV and radio intended for Western European audiences but picked up by audiences behind the Iron Curtain, made the superior consumer goods and political freedoms of the West common knowledge and the subject of much envy and yearning.

To placate their populations and build up their production capacity, the Soviet satellite states wound up borrowing heavily from Western governments, gambling on the success of future exports. But they never managed to make goods that the rest of the world wanted, and had to borrow more cash; Kotkin persuasively argues that the regimes in most of the bloc nations realized they were living on borrowed time by the late 1980s. Mikhail Gorbachev's reform program, a reprise of the "socialism with a human face" promised (then squashed) in the Prague Spring of 1968, turned out to be ideologically and practically impossible. To admit that Soviet-style socialism could be reformed was to allow that it wasn't already the best possible system, confessing to decades of lying and laying the whole apparatus open to revision and revolution while the tempting example of Western-style market economies waited right next door. "Reform amounted to autoliquidation," Kotkin writes.

Above all, the Communist establishments proved incapable of fixing their states because they lacked "initiative, independent judgement and integrity." Their monolithic bureaucracies, where advancement was based on loyalty and obedience to superiors as well as on ideological conformity, eliminated individuals with those qualities. "Incompetence in Communist systems," writes Kotkin, "was therefore structural." Oppressive state security apparatus minimized and marginalized any organized opposition except in Poland, where the Catholic Church provided an encouraging example of an alternative social institution. Yet even Solidarity had not really planned to take over the government, and only ascended (briefly) to power via the Communists' spectacular mismanagement of electoral design.

When the bloc governments began to teeter, Kotkin argues, it was the littlest things that set them off. A pastor in Romania asked 40 elderly parishioners to protest his eviction from his home. Theology students gathered to pray for peace in a Leipzig church. An East German official misspoke at a press conference. These events, tipping points in an ongoing loss of credibility, triggered what Kotkin describes as "political bank runs" on the entire system. In days, spontaneous mass demonstrations filled the streets.

Unlike hard-liners of the past, the rulers of 1989 couldn't count on Soviet tanks and troops to subdue the crowds and provide them with a "Chinese solution" (a reference to the Tiananmen Square massacre of that summer). Gorbachev had made it clear that the USSR would not step in to save their asses as it had in Prague in 1968. But above all, what did the establishment really have to defend? "Many Communists lost interest in preserving their own system," Kotkin writes. "Not all, but a number, of party officials preferred to become an asset-owning bourgeoisie." They could bloody their streets to sustain regimes they already knew to be economically untenable, or (for the few with a shred or two of wherewithal), they could start thinking about how to feather their post-Soviet nests.

In their introduction, Kotkin and Gross concede that this story -- in which the brave and idealistic are largely sidelined and victory comes in the form of the exhausted capitulation of an incompetent villain -- is "depressing." However, it's not, they sardonically note, as "disheartening" as the West's current crisis, in which elites who were supposedly selected to run things via a free-market meritocracy were equally guilty of "spectacular incomprehension, lucrative recklessness and not infrequent fraud ... We can only hope that the market and democracy prove their resiliency and good governance and accountability return." I'm guessing, though, that they won't be holding their breaths.