The gay literary lion talks about his juicy memoir, same-sex marriage -- and his beef with Gore Vidal 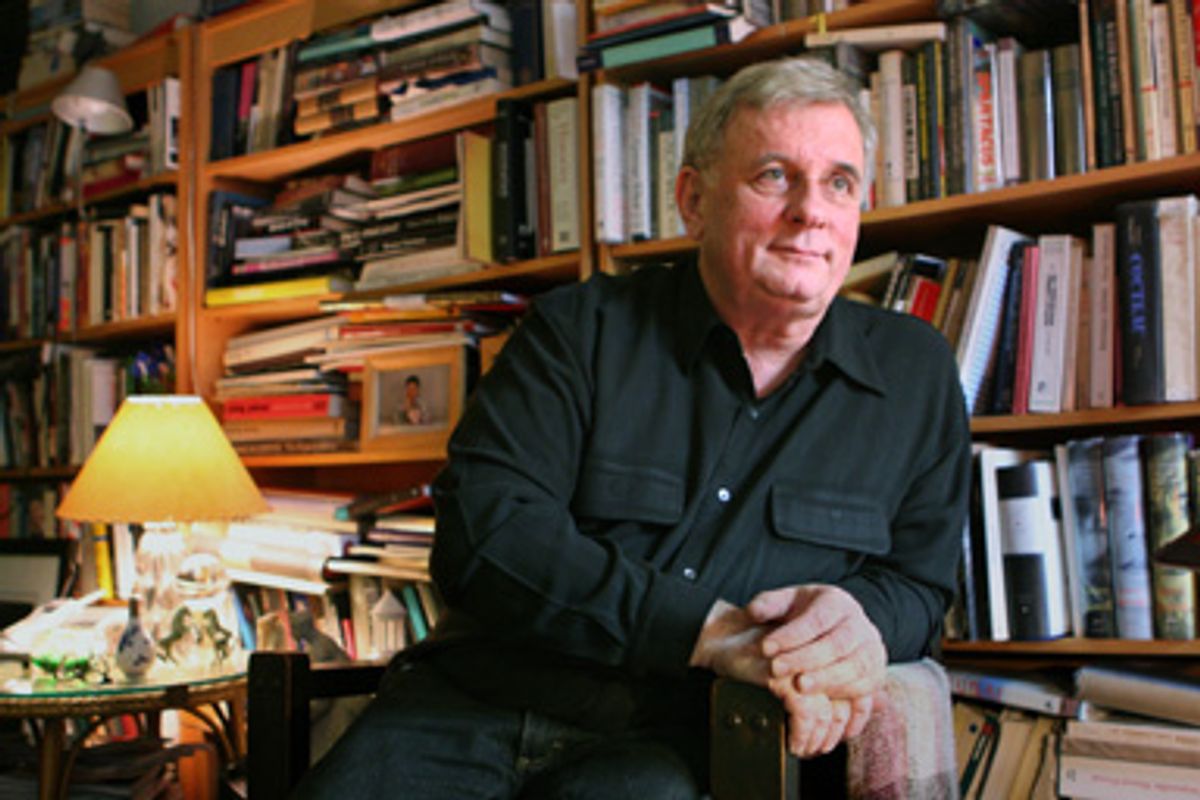 Edmund White is one of the few literary giants of the gay world. He is best known for his tetralogy of autobiographical novels -- including "A Boy's Own Story," "The Beautiful Room Is Empty" and "The Farewell Symphony" -- and "States of Desire," a travelogue of pre-AIDS gay America. If his latest memoir, "City Boy," is anything to go by, he's also a very hard person to impress.

In "City Boy," White recounts his time in New York during the '60s and '70s, before and after the Stonewall riots. Back when New York was still a dangerous and dirty town, White arrived from the Midwest and managed to work his way into the inner circle of the city's cultural heavy hitters through a combination of talent, charm and sexual magnetism. Along the way he also co-authored a sex book ("The Joy of Gay Sex"), had flings with writer Bruce Chatwin and poet John Ashbery, and took jaunts to Rome and Venice. The book is as notable for its depictions of pre-AIDS gay life -- with its unabashed hedonism and seedy sex clubs -- as  for its insidery take on the New York literary world.

White spends much of the book describing his literary compatriots in unflattering terms, and few of his acquaintances from the period emerge unscathed. But White reserves his most acidic prose for those gay critics and artists who remained in the closet (the most vicious attack is aimed at Susan Sontag). Recently, White has himself been the subject of an attack by Gore Vidal, who savaged him in an interview with the Times of London. Talking about White's play "Terre Haute," which recounts a fictional encounter between Vidal and Oklahoma City bomber Timothy McVeigh, Vidal called White "a filthy low writer" and dismissed his play as a "vulgar fag-ism."

Salon spoke to White in his New York apartment about the continued importance of gay literature, how the Internet is changing gay culture -- and why Gore Vidal is an "awful, nasty man."

A video excerpt of the interview is included below.

Gay culture is becoming much less easy to define, thanks in part to the Internet. Do you think that's a good thing?

If I had been my age back in the '70s I would have probably been alone, whereas now I have lots of boyfriends, because I can meet people online who like old men. Rare birds can find each other, even if it sometimes means traveling a thousand miles. I have a boyfriend now in Spain, who is 31 but likes much older men who are chubby. That's the kind of thing that happens because of the Internet, so I'd be the last person to knock it.

We're in this post-gay period where you can announce to everybody that you yourself are gay, and you can write books in which there are gay characters, but you don't need to write exclusively about that. Your characters don't need to inhabit a ghetto any more than you do. A straight writer can write a gay novel and not worry about it, and a gay novelist can write about straight people. ["The Hours" author] Michael Cunningham is a good example of someone who is out himself and has written things about gay people, but he doesn't feel the need to write exclusively about gays. There are tons like him among the younger writers.

If you were starting your writing career now, do you think you'd be less inclined to write about gay things?

I've written lots of things that aren't gay. Though I'm writing a novel now about a gay man and a straight man who are best friends, and I follow them over three decades. That's a subject that is so obvious, and almost every gay male I know has a close straight male friend, but no one's ever written about it as far as I know. It's amazing to me that such an obvious subject has never been treated, and I think there are tons of subjects like that. I still find gay life, or the suburbs of gay life, very interesting to write about. I mean, where are the sinister, destructive gay characters?

Early on, after gay liberation, there was an almost Stalinist pressure from gay critics and even gay readers to write about positive role models. We were never supposed to write negative things about gays or else we were seen as collaborating with the enemy. Now I think we've gotten to the point where we could write about that older gay male couple who preys on younger boys.

I'm assuming you read the Gore Vidal interview in the Times of London. He says a number of very nasty things about you -- but he also makes accusations that you "gayed-up" his relationship with Tim McVeigh in your play "Terre Haute."

He signed off on it. Now, late in the day, he's decided he doesn't like it, or maybe he forgot -- he drinks a lot. The tension for the [Gore-inspired] character is that he doesn't actually approve of what McVeigh did, but he's attracted to McVeigh as a man and as a personality -- whereas Gore actually approves of what McVeigh did and thinks he's a great freedom fighter.

That's complete lunacy. Gore wanted me to rewrite it to show a lot more sympathy toward McVeigh, but I thought that would lose about 99 percent of the audience. I don't approve of killing hundreds of people in the name of some abstract ideal. I think Gore is a complete lunatic, and it doesn't bother me what he says about me. He's an awful, nasty man. Now he can't write. He's wheelchair-bound, and he's in pain. He lost his lover of many years. The last time I talked to him I said, "Come to dinner, and I'll have some cute boys for you to meet." "Oh, I don't want to meet any of them! " You know, he's just an old grouch.

He's been nice to me over the years, but he's always like this seething volcano and you're always wondering when he's going to go off.

I don't know what he's famous for anywhere, really, because I think those historical novels are complete works of taxidermy. Nobody can read those. "Myra Breckinridge" was funny but light. The essays are what everybody defends -- but a friend of mine who did a volume of the best essays of the 20th century said they're all so topical that they've all aged terribly. I don't know where his work is. You have to have one or two books that are actually good if you're going to have a lasting career, and I don't think he does.

By that standard, which of your books do you think will last?

It's not for me to decide, but "A Boy's Own Story" seems to have entered the canon. I mean, even Harold Bloom chose it for the canon.

You name a lot of names in this book -- often connected to a fairly explicit sexual story. How did you decide whom to include?

I wanted to write about my own formation as a writer, and I also wanted to write about the beginning of gay liberation. I do probably come down a little hard on a group of people I call the "blue chip gays." I mean people who have managed to become very, very famous and are still very famous partly through staying in the closet, like Jasper Johns, Cy Twombly, Susan Sontag, Harold Brodkey and others. One of the side benefits of staying in the closet is you can have a much bigger career.

A lot of what you write -- and celebrate -- in the book is a culture of hedonism and sexual experimentation that seems at odds with the gay marriage movement. What do you make of this generation's pursuit of gay marriage?

I believe in promiscuity. But you know people are a lot more complicated than they appear to be. I mean, right now I'm in a relationship where I am faithful because my partner wants me to be, and I respect him enough -- and it lowers the level of anxiety in our relationship. He's also extraordinarily hot.

In the past, when gays were very flamboyant as drag queens or as leather queens or whatever, that just amused people. And most of the people that come and watch the gay Halloween parade, where all those excesses are on display, those are straight families, and they think it's funny. But what people don't think is so funny is when two middle-aged lawyers who are married to each other move in next door to you and your wife and they have adopted a Korean girl and they want to send her to school with your children and they want to socialize with you and share a drink over the backyard fence. That creeps people out, especially Christians. So, I don't think gay marriage is a conservative issue. I think it's a radical issue.

A lot of your rise to literary fame in the '60s and '70s involved networking -- and sometimes sleeping with -- important figures in the literary world. Do you think the Internet has changed the importance of that for young writers?

I think the more ways there are into literature, whether it's being published in book form or in any other form, the better. There is always the danger in any society that only insiders who are privileged will have access to publication. I think whenever that system breaks down there is this sudden flourishing of talent. Maybe we're witnessing that with the blog era.

In the book you briefly mention blogging -- and not in a very positive light.

I was saying there are more people blogging than there are people reading them sometimes. I mean, hundreds of thousands of people a year submit poems to poetry magazines, but only about a thousand people subscribe to them. We have many more writers than readers now.

I like late-night talk shows, partly because that's the part of the day when I'm unwinding, and like every other tired businessman in America, I want to zone out. I can't even tell you their names, but I do watch that stuff.