First they came for Rush Limbaugh 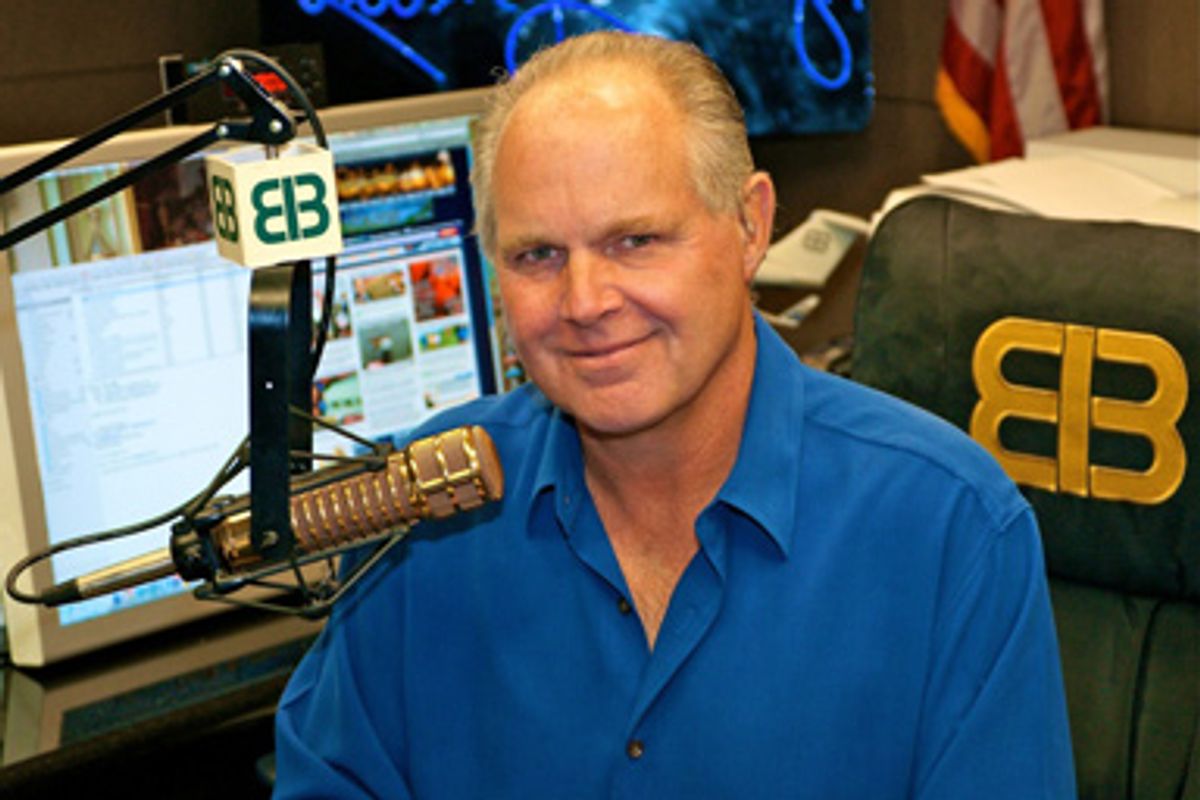 Conservatives are all about taking responsibility for one’s personal actions, or at least they used to be. Rush Limbaugh is facing the consequences of the buffoonish, offensive cartoon persona that’s made him a gazillionaire: The controversy-averse brotherhood of NFL owners harrumphed disapproval of Limbaugh’s role in a bid to buy the St. Louis Rams, and within a few days the group Limbaugh was part of dropped the radio bully from its bid.

I’m sure the snub is causing Rusty to relive childhood traumas, and I feel a little sorry for him. It must be awful to be kicked to the curb by guys who used to admire you, and the deep pockets you brought to their bid. And Limbaugh sure got angry that his bid ran into choppy water. “This is not about the NFL, it's not about the St. Louis Rams, it's not about me. This is about the ongoing effort by the left in this country, wherever you find them, in the media, the Democrat Party, or wherever, to destroy conservatism, to prevent the mainstreaming of anyone who is prominent as a conservative."

Limbaugh’s self-pity and paranoia is on red-alert again. The idea that prominent conservatives aren’t part of the American mainstream is ridiculous. But more important: Let’s be clear who’s denying Rush his chance to own an NFL team: the other rich guys who are trying to buy the team, who dropped him from their group at the first sign of trouble. It’s true Indianapolis  Colts owner Jim Irsay speculated that Rush’s team would have a hard time getting the required support of three-quarters of team owners, and that NFL Commissioner Roger Goodell commented, “Divisive comments are not what the N.F.L. is all about,” but the Limbaugh group didn’t mount much of an effort to buy the team.

It’s certainly possible their bid would ultimately have been rejected. When he became an ESPN football commentator, Limbaugh thought it was a good idea to take a gratuitous racial slap at Philadelphia Eagles quarterback Donovan McNabb, arguing that he “hasn’t been that good from the get-go,” but “the media has been very desirous that a black quarterback do well.” And while Limbaugh this week insists he’s "colorblind" and "treat[s] everyone equally," Media Matters assembled a list of two dozen other racially questionable Limbaugh remarks, from comparing the NFL to “a game between the Bloods and the Crips” to insisting Democrats won’t brook criticism of President Obama, “the little black man-child.” Of course, my favorite was when he said he was expected to “bend over, grab the ankles” for Obama because he’s black, since that let us explore Limbaugh’s strange anal obsession, which rivals (and sometimes overlaps with) his racial obsession. If NFL owners decided they didn’t want the baggage someone like Limbaugh carries, or the invidious garbage he peddles to gin up his ratings, they’d be within their rights.

But the funniest aspect of the collapse of Limbaugh’s bid is the reaction on the right. At “Big Hollywood,” John Ziegler was inconsolable. “Even in these times when the once unthinkable is becoming increasingly unremarkable, the current controversy over whether Rush Limbaugh is potentially worthy to be an NFL owner crosses over from the simply outrageous to the utterly infuriating. I strongly believe that it also represents a seminal moment in our cultural history as well as the sad state of free speech in this country.” Whoa! Like a lot of challenged thinkers, Ziegler seems to think Rush’s right to free speech also guarantees he’ll face no consequences for that speech. “I’m getting a lot of ‘boycott the NFL’ emails,” huffed the National Review’s Kathryn Lopez on Twitter this a.m. I’m sure the NFL is atwitter about that right now.

And a Red State diarist went so far over the top, I thought it was satire, but t-square has been on the site for four years and is easily moved to hysteria. In a blog post titled “Tonight … We are all Rush Limbaugh,” t-square told us … well, you just have to read a little:

Earlier this evening, as most of you now know, one of our own, Rush Hudson Limbaugh, while taking withering fire, crashed and burned.

Tonight, Rush is no longer ‘just’ a radio personality.

Tonight, Rush is no longer ‘just’ a NFL owner denied

Tonight, Rush is us. And we are him.

Tonight Rush became the metaphor for all of us… every man woman and child in this great nation of ours.

The enemy of this great nation, the enemy of you and me, Rush’s enemy … those on the left, inside and outside of this nation abhor success … and when faced with it will destroy it … by any and all means possible.

It went on and on like that and ended with the famous anti-Nazism parable attributed to Pastor Martin Niemöller, “First they came for the communists …” I'm serious.

Let’s ignore the fact that if anyone ever "came for the communists," it would be Rush and the red-staters. The paranoia and self-pity would be funny, except it’s fueling an opposition to Obama that seems increasingly unhinged. Even as he denies it, Limbaugh is making himself the face of the Republican opposition, and today that face is puffy and tear-streaked and red with self-pitying rage. I can't wait to hear what he says on his show today.