Eavesdropping on pilots and air traffic control, missing captains, and a lesson on airspeed 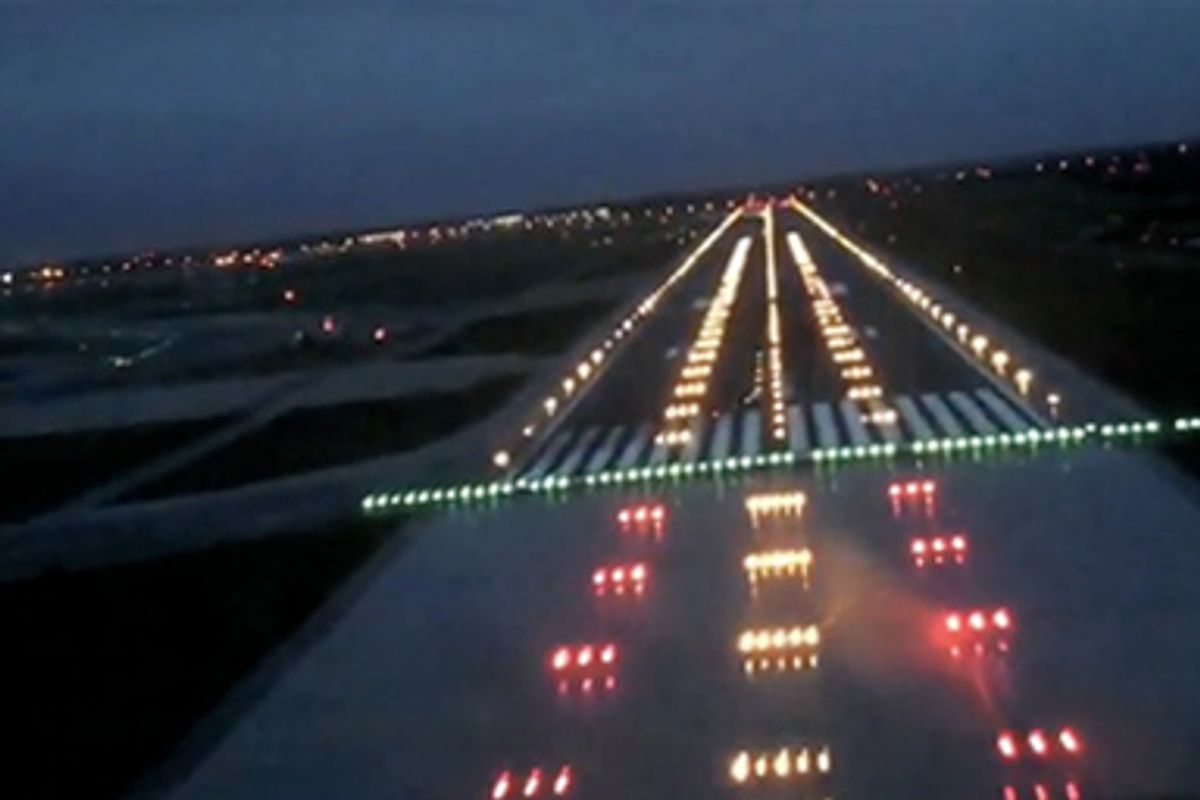 Would there be a problem with hooking up a nose camera so we could experience the same view as the pilots? It'd be very cool to see the takeoff and landing as the cockpit crew sees it.

A number of airlines already have this, connected to the seat-back screens on their 777 or Airbus series aircraft. I've experienced it myself on at least two carriers -- Air France and Emirates. On Emirates, the system allows you to switch back and forth between a nose view and one that points straight down, showing what the plane is passing over. (The latter resulted in a rather silly controversy in Britain when nude backyard sunbathers worried that overflying passengers were getting a free peep show.) Iberia Airlines is among those offering a backward-facing view -- a somewhat dizzying perspective that lets you see the departure runway slowly falling away.

I am not aware of any U.S. airlines with these features. Which is too bad.

Otherwise, the closest we have anymore is the audio feed on United Airlines, which allows you to eavesdrop on the conversation between pilots and air traffic control. They call it "channel 9" in honor of its position in your armrest dial. It's either fascinating or tediously indecipherable, depending on your level of infatuation with flight. It is sometimes unavailable, at the crew's discretion, because of the unfriendly letters people send and the litigation they threaten when it's perceived the pilots have made some "mistake." Also, passengers not familiar with the vernacular may misinterpret a transmission and assume nonexistent or exaggerated troubles. Let's say a controller is spacing a series of aircraft and asks, "United 537, um, do you think you can make it?" This is a query pertaining to whether a plane can hit a specific height or speed at a specific fix. Depending on the controller's intonation, or the pilot's reply -- "No, I don't think so" -- such innocuous exchanges might have a passenger bursting into tears and picturing his wife and children.

In the late 1970s, American Airlines had cameras in the cockpits of its DC-10s that would allow you to watch the crew performing takeoffs and landings. I remember seeing it a few times as a kid. How quaint the idea seems today. The footage was grainy, projected on the old-fashioned bulkhead movie screens.

Our flight was delayed for two hours because they couldn't find a captain. Initially we were told he was en route from a different concourse, but then it changed to "We don't have a captain." How can an airline schedule a flight without a captain?

They can't and wouldn't. The scheduling matrix at a large carrier is highly complex, and crews will sometimes interchange, "connecting" much the way passengers do -- the captain arriving on one flight; the first officer from another. And because of earlier delays, one of those pilots might be subject to flight or duty-time restrictions while the other is not. With delays so unpredictable, last-minute substitutions aren't uncommon, which might entail having to call in a pilot from at-home reserve. These situations are often dumbed down into the likes of "We don't have a captain."

I've noticed that when cleared for takeoff, a plane's engines seem to increase thrust slightly, then level off, then go to full power three or four seconds later. It's like they are warming up for a moment. Is this correct?

Yes. This isn't the procedure for all engine types, but it is for many of them, including those on the planes that I fly. We accelerate the engines to a prescribed RPM, allow them to stabilize for a few seconds, then advance them toward takeoff power. At a certain point, the auto-throttle system takes over and fine-tunes the thrust.

Southwest was running a commercial that said its Boeing 737s fly at "an average speed of 590 miles per hour." That doesn't seem right to me. It sounds awfully fast.

It depends on whether they're talking nautical miles or statute, and true airspeed, indicated airspeed or groundspeed. Confused already? Keep reading...

The speed at which a plane is moving through air or relative to the ground isn't necessarily the speed a pilot reads from the cockpit airspeed gauges. They can all be different, and usually they are.

What the pilot sees on the primary cockpit speed gauge is called indicated airspeed (IAS). This is the basic reference for all flight maneuvering. This value does not account for changes in temperature and pressure, however, both of which, as a rule, drop as altitude climbs. Adjusting for this phenomenon gives us something called true airspeed (TAS). Imagine two airplanes. One is flying at 1,000 feet, the other at 30,000 feet. Both are showing 200 knots (nautical miles per hour) on their airspeed gauges. As far as the aircraft themselves are concerned -- in terms of the amounts of lift, drag and wind resistance -- both are traveling at exactly the same speed. However, the plane at 30,000 feet is actually traveling much, much faster through the air -- some 60 percent faster. But because the high-altitude atmosphere is thinner, the plane isn't "feeling" it. (TAS is never a fixed value. Because temperature and pressure can vary at any given altitude, so does TAS.)

Indicated speed is used as the standard reference rather than true airspeed, because this is what the airplane "feels." Stalls, takeoff and landing speeds, and various performance limitations are all predicated on IAS.

You've also got groundspeed to consider -- your velocity relative to the surface. Speed through the air and speed over the ground can be substantially different, dependent mostly on whether there's a headwind or a tailwind. Heck, you can point a small Cessna into a strong headwind and actually fly backward relative to the ground, still with a healthy IAS or TAS on the gauges.