Forget Olympia Snowe; pass the right healthcare bill, and voters will reward you 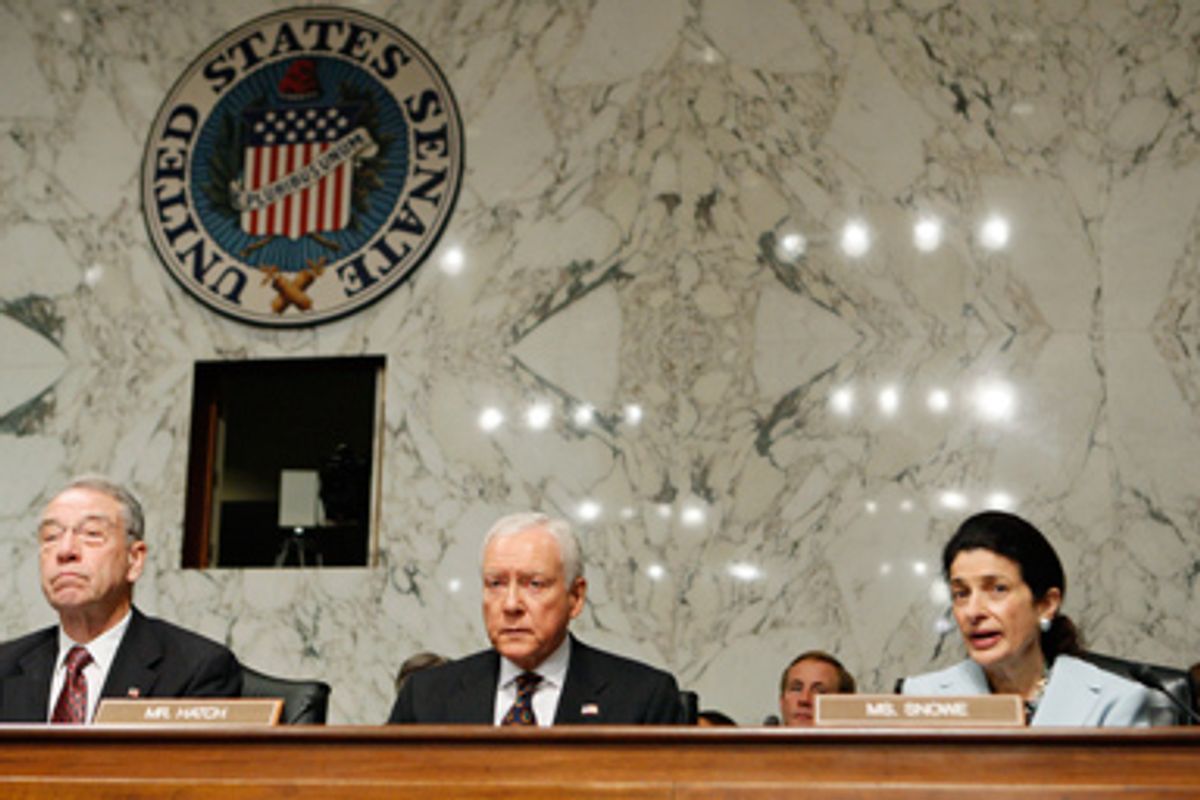 Specifically, I don’t get why Sen. Olympia Snowe, R-Maine -- or any Republican senator, for that matter -- is attracting so much attention.

In the last few months, Democratic senators eliminated the public option and substantially weakened their healthcare proposals in order to buy insurance industry acquiescence and, thus, Snowe’s vote. Now, based on the deafening media noise, all of American politics is focused on this unaccomplished backbencher and whether or not she will endorse the final bill. It is as if Republicans control Congress -- as if Snowe, not Barack Obama, won the biggest presidential landslide since Ronald Reagan.

This is bizarre for what should be obvious reasons.

First of all, Snowe's much-celebrated initial vote this week for an embarrassingly flaccid healthcare initiative wasn't necessary to pass the bill -- Democrats had enough votes to move the legislation out of the Senate Finance Committee without her approval. That's a mathematical fact, as is the fact that Democrats control the 60 votes to overcome a filibuster with or without Snowe; as is the fact that Democrats have the 51 votes to enact healthcare reform through a parliamentary procedure called reconciliation -- again, with or without Snowe.

So the notion that Snowe’s vote -- or any other GOP vote -- is inherently pivotal to healthcare reform is a fantasy created by the Beltway media and the Democratic congressional leadership. The former is desperately trying to manufacture headline-grabbing drama; the latter is looking for a Republican excuse to water down the bill and protect corporate interests -- all while absolving Democrats of legislative responsibility.

Second, the idea that Snowe’s support will result in the final legislation being called "bipartisan" -- and that such billing will politically protect Democrats -- is absurd. How do we know this? Because Democrats themselves taught us that via the Iraq war.

Recall that with solid Democratic and Republican backing, the 2002 Iraq resolution was far more "bipartisan" than any healthcare bill will ever be. Yet, Democrats turned right around and used the Iraq war to criticize Republicans -- and because the conflict was so wildly unpopular, Americans in 2006 and 2008 were willing to overlook the contradiction and vote for the only major party echoing any semblance of an antiwar message.

On healthcare, it will be the same in reverse: The GOP will invariably attempt to turn any bill into an electoral cudgel against Democrats -- regardless of how many Republicans end up voting for it.

The lesson, then, is simple: If the Democrats’ hypocritical Iraq criticism worked only because the war was such a disaster, then the GOP’s inevitable healthcare attacks -- however hypocritical -- can be thwarted only by making healthcare reform the opposite of Iraq (that is, a major success). For Democrats, in other words, good healthcare policy is great politics, and bad policy is the worst politics.

Whether passed by one congressional vote or 50, real reform that improves the system (a bill with a public option, tough insurance regulation and universal coverage) will transform the Democratic Party into an election-winning force forever known as "the generous protector of middle-class interests," as GOP strategist William Kristol admits. Conversely, even if passed unanimously, bad legislation that makes the system worse (a bill empowering insurance companies, preventing a public option, and leaving millions uncovered) will make GOP criticism of Democrats extremely effective.

That's a truism, no matter if Snowe or any other Republicans add their support to a healthcare bill that doesn’t actually need it in the first place.