That sound you hear is the social fabric about to snap

The real unemployment rate is almost 20 percent. Here's what the federal government can do about the jobs crisis 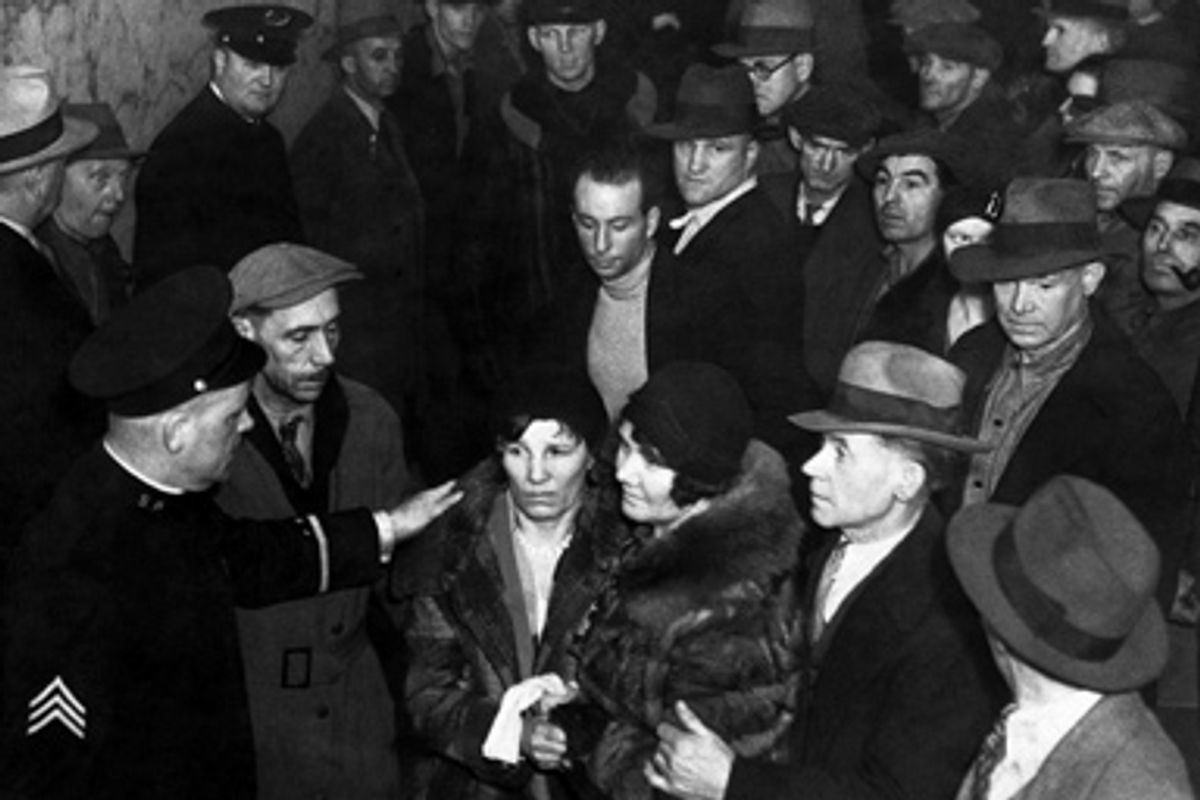 Unemployed people plea for aid in Seattle, circa 1930s.
--

According to official statistics, the unemployment rate in the United States is now 9.8 percent. But those statistics understate the severity of the jobs crisis. The official statistics do not include the 875,000 Americans who have given up looking for work, even though they want jobs. When these "marginally attached" workers and part-time workers are added to the officially unemployed, the result, according to another, broader governement measure of unemployment known as "U-6," is shocking. The United States has an unemployment rate of 17 percent.

And even this may understate the depth of the problem. By adding the 3.4 million Americans who want a job but have not looked for one in over a year, businessman, philanthropist and Obama advisor Leo Hindery Jr. infers an actual unemployment rate of 18.8 percent. In other words, nearly one in five Americans is unemployed or underemployed.

The sound you hear is the sound of the social fabric in America rotting and beginning to snap. Thanks to the unemployment insurance system adopted during the New Deal years, and thanks in part to the stimulus that the Obama administration and Congress passed earlier in the year, we do not have hordes of out-of-work Americans standing in line at soup kitchens and riding the rails from town to town. Even so, the invisible decay of America's social order is just as real as the highly visible decay of abandoned McMansions in new developments that are turning into ghost towns across the continent.

Mass unemployment has yet to spawn a wave of crime or social unrest. But those possibilities cannot be dismissed. And the desperation is real, even if it is not signaled by desperate acts. The psychological toll of prolonged unemployment is devastating on individuals who have lost their roles as breadwinners or productive, self-reliant citizens. Employers prefer not to hire people who have been unemployed for long periods -- and laid-off workers today are spending an average of 26.2 weeks without jobs, the highest average since the Great Depression. And then there are the new graduates of high schools and colleges, a lost generation whose members may be crippled throughout their careers by the lack of opportunities in their youth.

The American political class, insulated by wealth and connections from the economic storm, has been slow to respond to this crisis. The Democratic majority in Washington has hoped that the stimulus would solve much of the problem. While waiting for its effects to manifest themselves, the Democrats have focused on long-term problems of structural reform -- healthcare, the environment, education. The Republican right has nothing to offer, except a contradictory message that both taxes and deficits should be drastically cut.

During the campaign, candidate Obama promised a jobs tax credit. That idea was left out of the stimulus, however. Democrats feared that employers would game the program while Republicans wanted broader tax cuts for business and individuals. Last spring, some administration officials said complacently that "employment is a lagging indicator" and that the jobs would return if we were patient enough. Now that unemployment is both worse than expected and more enduring, there is a growing recognition of the need to do something to address the sinkhole in the economic landscape into which so many individuals and communities are tumbling.

My colleagues and I at the New America Foundation's Economic Growth program have put together an expert round table featuring different proposals. Timothy J. Bartik of the W.E. Upjohn Institute for Employment Research proposes a New Jobs Tax Credit, like the one that candidate Obama favored, modeled on Carter-era precedents and an innovative state program in Minnesota. James K. Galbraith of the University of Texas proposes a major expansion of federal funding of state and local services, education, healthcare, infrastructure and energy investment. And L. Randall Wray of the University of Missouri-Kansas City proposes that the government act as employer of last resort, offering a job to anyone who wants one.

My guess is that Congress, if it does anything, will be attracted to tax credits for new jobs. In our taxophobic age, Congress always prefers tax credits to direct spending. But in the absence of demand for their goods and services, employers are not going to hire more workers, no matter what incentives are provided. For this reason, the optimal synthesis might be a combination of tax credits to lower the cost of hiring with sustained public investment in infrastructure and public services, where the government for the foreseeable future must replace the tapped-out consumer as the driver of demand in the U.S. economy for the next few years.

All of these policies would cost at least tens of billions in additional federal spending a year, for the next few years. But the costs must be kept in perspective. After the additions to the federal deficit and debt created by the stimulus and the bailouts of the banking sector, even ambitious jobs programs would add relatively little to America's long-term fiscal shortfall. And while the benefits could be estimated, the psychological and social benefits of putting Americans back to work, in terms of self-esteem and hope about the future, are literally incalculable.

Ronald Reagan was fond of saying, "Don't just do something, stand there." While this may sum up the approach of a certain kind of complacent, anti-government conservatism, the sentiment is not only politically suicidal but also unethical in a country where mass unemployment and mass foreclosures have littered the landscape with rotting houses and rotting lives. Like the New Deal Democrats, today's Democrats need to experiment ceaselessly, trying and abandoning programs until they find some that succeed in putting Americans back to work in a productive economy.