Why are we still in Afghanistan?

The country poses no threat to the U.S., but the war costs lives, drains the treasury and makes enemies 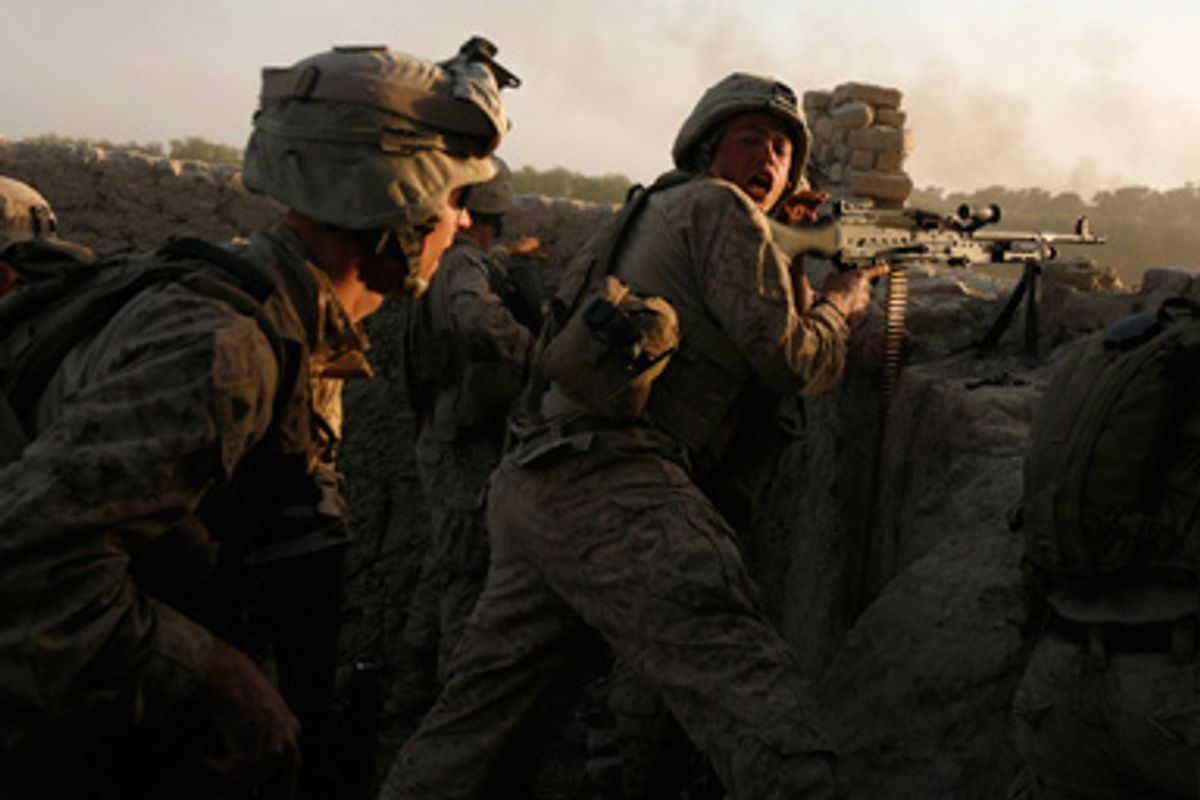 U.S. marines fire during a Taliban ambush as they carry out an operation to clear an area in Helmand province, October 9, 2009.
--

One of the enduring oddities of the American foreign policy debate is that asking the most obvious questions is all but forbidden. For example, how does Afghanistan pose a threat to the United States?

Certainly not in any military sense. The impoverished, largely illiterate Afghans have no army apart from the one U.S. and NATO forces, with very limited success, are trying to train. No air force, no navy, no offensive military capacity whatsoever.

From the U.S. perspective, Afghanistan is the absolute end of the earth. Indeed, it's not a nation at all. The idea that well-intentioned Westerners can create an efficient central government on, say, the Swiss model, where none has ever existed, much less one acceptable to Afghanistan's many warring tribes, sects and ethnic factions, is almost certainly a delusion.

Here's the reality, as explained by a theater manager in somewhat Westernized Kabul to the New York Times: "The Afghan people are not mentally united ... An Uzbek will never vote for a Tajik. A Tajik will never vote for a Pashtun." The prevailing view, reporter Sabrina Tavernise found, appears to be that President Hamid Karzai's recent election victory was both fraudulent and inevitable.

Almost nobody believes a recount would solve anything. "Even if every Afghan casts their vote for (runner-up) (Abdullah) Abdullah, he won't be president because the foreigners don't want him to be," another man told her. "Nobody respected the people's vote."

Granted, Obama's current dilemma is yet another fine mess bequeathed to him by the epic incompetence of George W. Bush. But it's a political rather than a military threat Obama faces. Terrorists can't defeat the United States; they can only cause American politicians to self-destruct in fear of taking blame for future atrocities.

Had the United States and its allies not diverted manpower and resources from Afghanistan to a futile, unnecessary war in Iraq, the counterinsurgency techniques proposed by Gen. Stanley McChrystal to persuade Taliban fighters to put down their weapons might have worked.

Eight bloody years on, however, what motivates the insurgency has been captured in an extraordinary series by David Rohde, the New York Times reporter rescued after seven months as a Taliban prisoner.

While his "captors harbored many delusions about Westerners," Rohde writes, U.S. antiterrorist policies had galvanized them. "They said large numbers of civilians had been killed in Afghanistan, Iraq and the Palestinian territories in aerial bombings. Muslim prisoners had been physically abused and sexually humiliated in Iraq. Scores of men had been detained in Cuba and Afghanistan for up to seven years without charges."

Rohde witnessed Taliban militants weeping over a NATO airstrike that killed scores of Afghan women and children. "To Americans," he writes "these episodes were aberrations. To my captors, they were proof that the United States was a hypocritical and duplicitous power that flouted international law.

"When I told them I was an innocent civilian who should be released, they responded that the United States had held and tortured Muslims in secret detention centers for years. Commanders said they themselves had been imprisoned, their families ignorant of their fate. Why, they asked, should they treat me differently?"

And yet they did. Because his kidnappers saw Rohde as a valuable commodity, he was housed comfortably, provided with toiletries, fresh food and water, newspapers and a short-wave radio. While often threatened, Rohde was never tortured; his captors even took him to a remote spot in the mountains to shoot a video making his plight appear worse than it was.

Although it infuriates some Americans to hear that "terrorists" have recognizable human motives, understanding them is also crucial to what Gen. McChrystal hopes to achieve there: separating ethnic Pashtun insurgents from al-Qaida fanatics by offering what his report calls "reasonable incentives to stop fighting and return to normalcy, possibly including the provision of employment and protection."

U.S. intelligence officers have told the Boston Globe that an estimated "Ninety percent (of Afghan fighters constitute) a tribal, localized insurgency ... Ten percent are hardcore ideologues fighting for the Taliban."

And what if a U.S. president recognized that destroying mud villages and killing children in distant Afghanistan isn't making America safer? That endless war creates endless enemies? What if he showed enough political courage to say that 100 percent security from terrorism isn't possible? That the mad, quixotic attempt to achieve it is sacrificing the lives of our best and bravest while it bankrupts the treasury?

Who in the world would be angry with him except the Washington war lobby and Osama bin Laden?