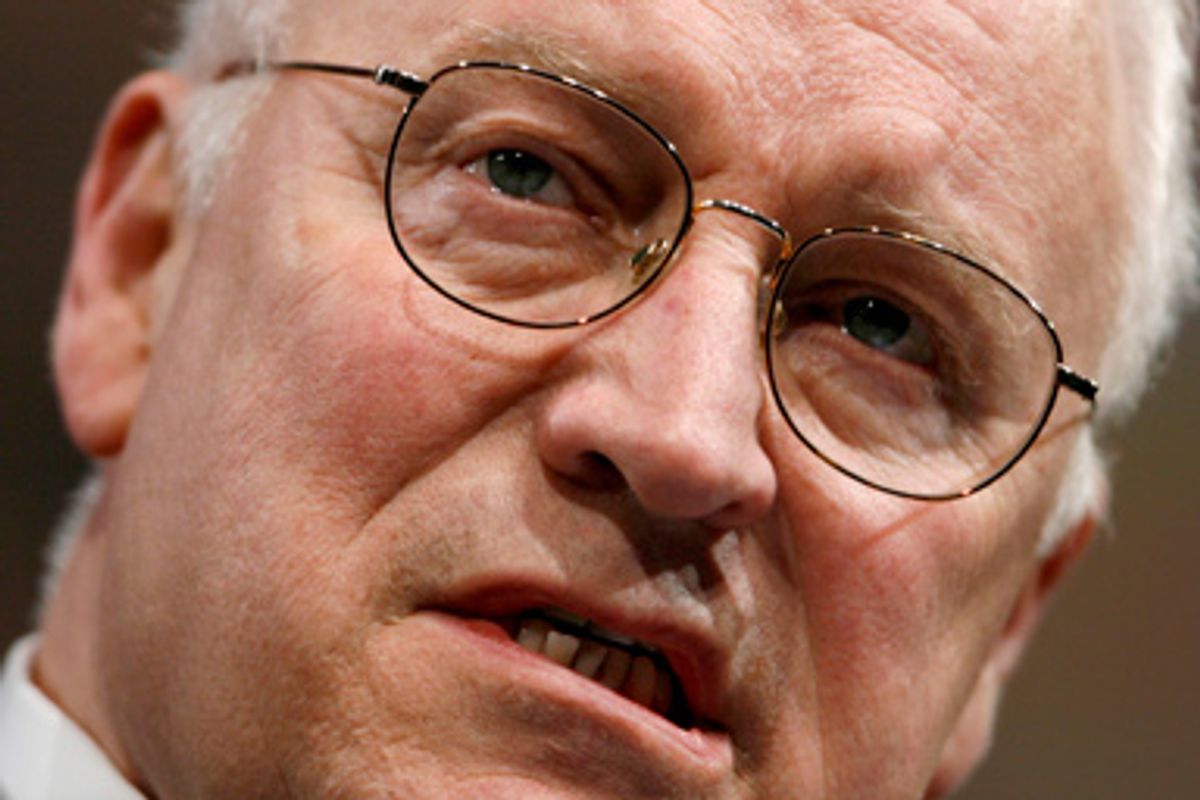 Ooooh, Dick Cheney's back, just in time for Halloween! In a Wednesday speech at Frank Gaffney's far-right Center for Security Policy, Cheney blasted President Obama for being "afraid" to make a decision about sending more troops to Afghanistan, insisting the White House "must stop dithering while America's armed forces are in danger." Cheney had the audacity to say the Obama team merely implemented the Bush-Cheney strategy when they sent 21,000 more American soldiers to Afghanistan in March. I had the misfortune to debate Tom Tancredo on this idiocy tonight on MSNBC's The Ed Show. Watch. Text continues below.

Where do I begin? How does a man who spent much of his vice presidency hiding in a secret bunker get off accusing the president of being "afraid"? How does a guy who got five deferments from service in Vietnam, because he famously had "other priorities," call someone else a coward? (Still, Chickenhawk Cheney had no problem sending other people's children off to die in needless wars.) How does a guy who dropped the ball on the Afghan war, letting Osama bin Laden escape and the Taliban retrench, blame someone else for "dithering" on Afghanistan?

Now, as Obama is forced to dig out of another Bush-Cheney mess he inherited, and the former veep is savaging him again? The irony is that it's true that Obama approved a troop increase that had been requested during the Bush-Cheney administration, but as press secretary Robert Gibbs notes, that's because it "sat on desks in this White House, including the vice-president's, for more than eight months."

It's great to watch people step up to smack Cheney down. Retired Gen. Paul Eaton blasted back today, and I couldn't say it any better:

"The record is clear: Dick Cheney and the Bush administration were incompetent war fighters. They ignored Afghanistan for 7 years with a crude approach to counter-insurgency warfare best illustrated by: 1. Deny it. 2. Ignore it. 3. Bomb it. While our intelligence agencies called the region the greatest threat to America, the Bush White House under-resourced our military efforts, shifted attention to Iraq, and failed to bring to justice the masterminds of September 11.

"The only time Cheney and his cabal of foreign policy 'experts' have anything to say is when they feel compelled to protect this failed legacy. While President Obama is tasked with cleaning up the considerable mess they left behind, they continue to defend torture or rewrite a legacy of indifference on Afghanistan. …

"No human endeavor can be as profound as sending a nation's youth to war. I am very happy to see serious men and women working hard to get it right."

"I think President Obama is entitled to take sufficient time to decide what our long-term role ought to be in Afghanistan. Then I think he should come to Congress and say to the American people what that plan is and see if he can persuade us and all of the American people of the rightness of it because he needs to have support all the way through to the end of that mission, so I want him to take the time to get it right."

Maybe the tide is turning on Cheney, and even responsible Republicans are starting to realize he is one of the most unpopular figures in American history, whose administration will be remembered for its unwon wars and economic collapse. I think Cheney should take a break from speechifying, maybe spend more time at home with his family, frightening his grandchildren.