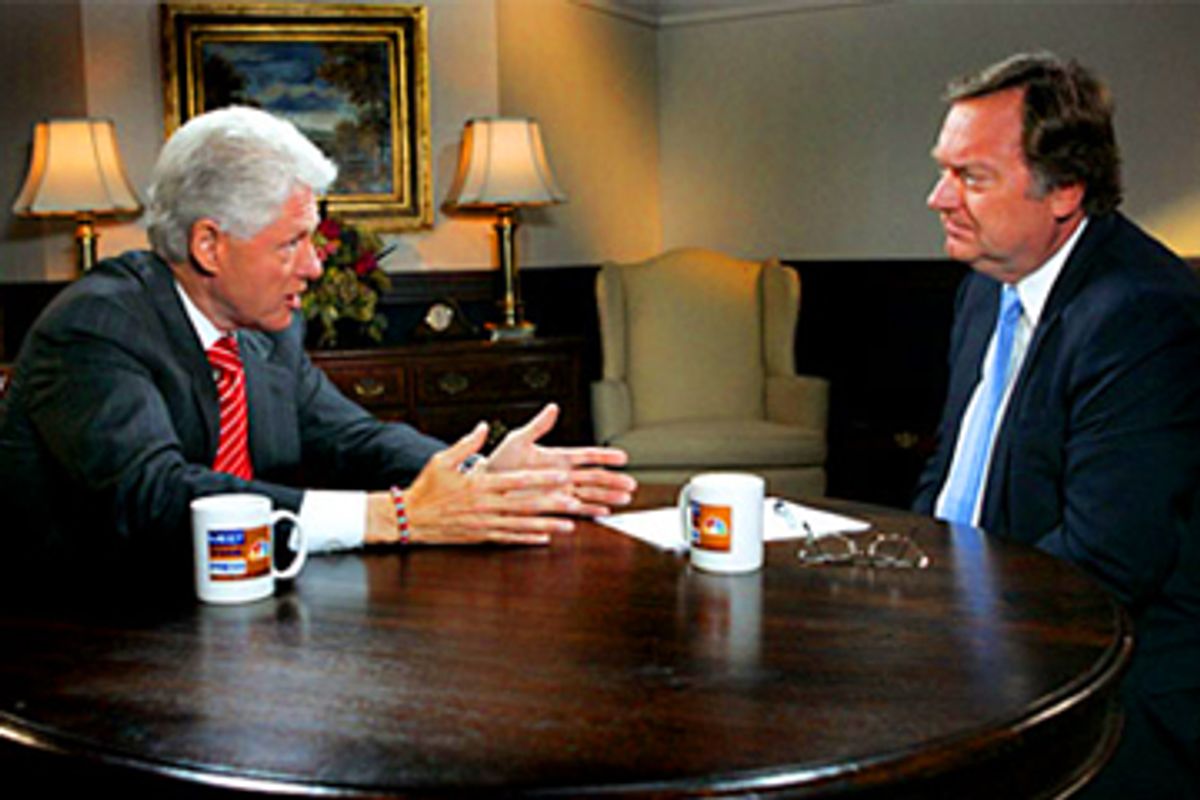 After a week of traveling, I finally finished "The Clinton Tapes," Taylor Branch's book of interviews with Bill Clinton. So better late than never, I hope, I'm going to wrap up my experiment with the blog-review. Tell me if it worked in comments, below.

I had a nagging question about whether I should write about the book again, though, and it wasn't laziness; it's that most everything I found remarkable in the second half of the book closely matched my first two blog posts. But that's a story in itself. "The Clinton Tapes" makes clear that from start to finish, President Clinton was besieged by a vicious just-say-no GOP abetted by the perversely, inexplicably, cruelly anti-Clinton leaders of the so-called liberal media -- from the New York Times' lame crusades against Whitewater and Chinese donors and Wen Ho Lee, to the integrity-free "opinion" journalism by Maureen Dowd and, sadly, Frank Rich, to a whole host of other liberal media characters who couldn't shake their feeling that Clinton was a fraud, a poseur, a hillbilly, a cynic. Their trashy eight-year oeuvre will likely go down in history as the most spectacularly malevolent and misguided White House coverage ever -- and politically costly, since it also encompassed Vice President Al Gore and probably made George W. Bush president in 2000.

But I did find a nugget from the second half of the book that perfectly captures the whole poisonous, deluded, clubby Beltway mentality of the mainstream media circa 2000. It stars the late Tim Russert.

Branch recounts being the lone Clinton defender on one of the last "Meet the Press" shows of Clinton's term, when all the other guests were still obsessed with the president's sex life. It was bad enough on camera, but during commercial breaks Russert and his friends gossiped about alleged new Clinton girlfriends and sang the 2000 one-hit wonder "Who let the dogs out?" tapping their pencil along to the woof-woof chorus. (I don't believe in hell, but I think Russert spent some time in a way station in Purgatory being grilled on his poor political judgment during the Clinton-Gore years, before being welcomed to heaven by a God more forgiving than the Beltway mediocrities who sat in judgment on Clinton.)

It's always seemed to me no accident that the mainstream media began to lose its market share, its revenues and its respect in those years, when they slighted an embattled president's worthy if controversial initiatives on Middle East peace, Bosnia, welfare reform, making work pay and building a U.S. social democracy, in favor of gossip about his character, his marriage, his taste in women and even the distinguishing characteristics of the presidential penis.

Against this historical backdrop of childish media snickering, the sharp, accomplished Branch comes off as a naif and even a rube in some of his stories, consistently flummoxed by the enmity among Washington media players, some of them his friends, as they savaged Clinton beyond proportion. He writes, bewildered, about a spate of vicious headlines at the end of 1996: The Times' Abe Rosenthal accused the Clintons of "giving militant Islam its first beachhead in Bosnia," while Maureen Dowd dubbed Clinton the trivia-obsessed "President Pothole" and the "Limbo President," sinking ever lower. For good measure she added: "We pretty much know the Clintons did something wrong in Whitewater," when in fact, 12 years later, we know no such thing. Wen Ho Lee at least got an apology from the Times; the Clintons are still waiting. (Clark Hoyt, is it too late to take that factual error up with Dowd?)

But it wasn't just the Times: Branch also lays out Washington Post embarrassments; an Op-Ed by Andrew Sullivan headlined "The Clintons: Not a Flicker of Moral Life"; a declaration by liberal book critic Jonathan Yardley -- a friend and neighbor of Branch's -- that he wouldn't vote for Clinton in 1996 because he was a "buffoon" with a monstrous fault "at the core of his being ... He is a man who does not believe in anything." One of my favorite sections of the book features Hillary Clinton sitting in her kitchen explaining why, no, thank you, she is never going to invite the vicious Sally Quinn into her house -- and why should she, given Quinn's multiple treacherous, class-based takedowns of the Clintons as neighbors, leaders, parents, Americans? (The scenes Branch catches of Hillary in the kitchen -- not baking cookies, but having a glass of wine, helping Chelsea with homework and savaging their enemies with intelligence are among my favorite in this book.) You find yourself wishing and hoping Branch could find some Washington pooh-bahs who'd realize they'd been played by the Republicans. Nope. None at all.

A few other things are painful. The Clinton-Gore fight much referenced in coverage of the book is hard to read; on some level, they were both right. I've had this argument with liberal anti-Clinton friends, reporters and pollsters, who say Gore was perceptibly politically hurt by anti-Clinton animus among independents. On the other hand, my gut always told me he'd lose if he couldn't run on the Clinton-Gore economic resurgence. I still think Gore could have found a lot of ways, humorous or angry, to distance himself from the president's mistakes -- and Clinton expected him to, and didn't care if he did. But choosing Joe Lieberman and running like an anti-Clinton change candidate was a huge error.

Clinton also had George W. Bush's number from the beginning -- that the snarly scion was mean, arrogant, incurious, devoted to budget-busting tax cuts and greater state secrecy. Clinton fumed at the way the GOP, abetted by the media, worked the refs when it came to "dirty politics" all throughout the 2000 campaign. If Gore or his surrogates brought up, say, Dick Cheney's überconservative past, or Bush's inexperience in foreign affairs, they'd be trashed as practicing "old politics" and "politics as usual" and the typical partisan gridlock that Bush was committed (falsely) to transcending. So genuine policy differences and scandalous omissions and commissions in both Republicans' backgrounds went mostly unexamined, because at the Republicans' behest, the media decided that to focus on such issues was just backward-looking and gauche and so … 1998.

I enjoyed the book, even though I think it got bogged down in its commitment to chronology, and depicting what Clinton talked about and thought was important. I'd have loved to read a book Branch organized by the topics he thought were most important, chronologically or not. We dip into too many topics -- Bosnia, Russia, terror, the economy, Clinton's relationships with global leaders, sometimes for no more than a sentence. It captures the sweep of what a president faces, but it was also, sometimes, tedious.

But I appreciated Branch's honestly about his friendship with Clinton, his struggles to balance being an uncritical sounding board with a friend wanting to give advice (and a political junkie wanting to influence history!). I found his explanation of his different roles endearing; others may find it distracting.

I really liked him for staying close to his original point: Clinton was a man Branch was cynical about, an old friend turned politician whom Branch came to like more upon reacquaintance, a political operator who turned out to have more passion and integrity than many journalists or authors or activists or others who believe they've stayed "clean." As someone who's criticized Bill Clinton often but who always comes back to a position of (even grudging) respect, I found integrity in Branch's full-throated defense of Clinton; it's so rare and maybe long overdue. I still think the book will need the next Taylor Branch to pore over it like a historian, not a partisan or a friend, and help us get more clarity on this talented, ambitious, well-meaning, flawed, persecuted, paranoid merely mortal man. The most compelling story Branch captures is the way the media let us down.