Why is it bad to smoke weed and OK to sell beer?

Michael Phelps smoked a bong, Lance Armstrong is pushing alcohol. Why is Phelps the bad guy? 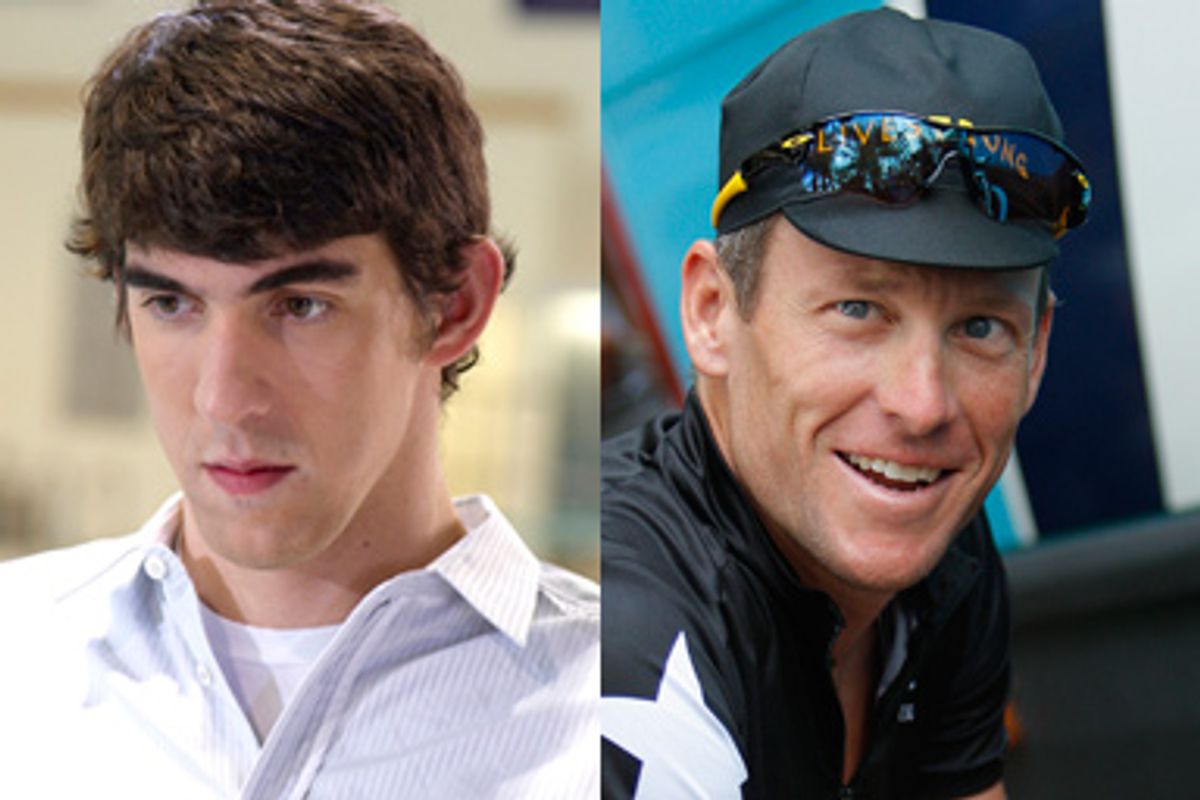 For better or worse, our American Idiocracy has come to rely on athletes as national pedagogues. Michael Jordan educated the country about commitment and just doing it. A.C. Green lectured us about sexual caution. Serena Williams and John McEnroe taught us what sportsmanship is -- and is not. And Charles Barkley outlined how society should define role models.

So when a single week like this one sees both the Justice Department back states' medical marijuana laws, and a Gallup poll shows record-level support for pot legalization, we can look to two superjocks -- Lance Armstrong and Michael Phelps -- for the key lesson about our absurd drug policy.

This Tale of Two Supermen began in February when Phelps, the gold-medal swimmer, was plastered all over national newspapers in a photo that showed him hitting a marijuana bong. Though he was smoking in private, the image ignited a public firestorm. USA Swimming suspended Phelps, Kellogg pulled its endorsement deal and the Associated Press sensationalized the incident as a national decision about whether heroes should "be perfect or flawed."

The alleged imperfection was Phelps’ decision to quietly consume a substance that "poses a much less serious public health problem than is currently posed by alcohol," as a redacted World Health Organization report admits. That's a finding confirmed by almost every objective science-based analysis, including a landmark University of California study in 2006 showing "no association at all" between marijuana use and cancer.

Alcohol, by contrast, causes roughly one in 30 of the world's cancer cases, according to the International Journal of Cancer. And a new report by Cancer Epidemiology journal shows that even beer, seemingly the least potent drink, may increase the odds of developing tumors.

Which brings us to Armstrong. This month, the Tour de France champion who beat cancer inked a contract to hawk Anheuser-Busch’s alcohol. That's right, less than a year after Phelps was crucified for merely smoking weed in private, few noticed or protested the planet's most famous cancer survivor becoming the public face of a possible carcinogen.

"Apparently, it’s perfectly acceptable for a world-class athlete to endorse a substance like alcohol that contributes to thousands of deaths each year, as well as hundreds of thousands of violent crimes and injuries," says Mason Tvert, a co-author of the new book "Marijuana Is Safer." "Yet a world-class athlete like Michael Phelps is ridiculed, punished and forced to apologize for marijuana, the use of which contributes to zero deaths, and has never been linked to violent or reckless behavior. Why the double standard?"

The data prove the answer isn't about health, and our culture proves it isn't about widespread allegiance to "Just Say No" abstinence. After all, whether through liquor commercials, wine magazines, beer-named stadiums or cocktail-drenched office parties, our society is constantly encouraging us to get our liquid high.

No, the double standard is about know-nothing statutes and attitudes promoting the recreational use of alcohol and banning the similar use of marijuana -- all thanks to retrograde mythologies of post-'60s Americana. In our now-dominant backlash folklore, the patriots are the straitlaced Joe and Jane Sixpacks -- and the Armstrongs who encourage their drinking. Meanwhile, the supposed evildoers are the pot-smoking Cheeches, Chongs and Phelpses, whose marijuana use allegedly underscores a dangerous hippie-ness.

Ergo, the moral of this Tale of Two Supermen: To end contradictions in narcotics policy and permit safer recreational drug choices, we have to first reject the outdated Silent Majority-vs.-Counterculture iconography that defines so much of our politics. We must, in other words, replace caricatures with scientific facts and mature into something more than an Idiocracy.