Let the president and his "dudes" play ball 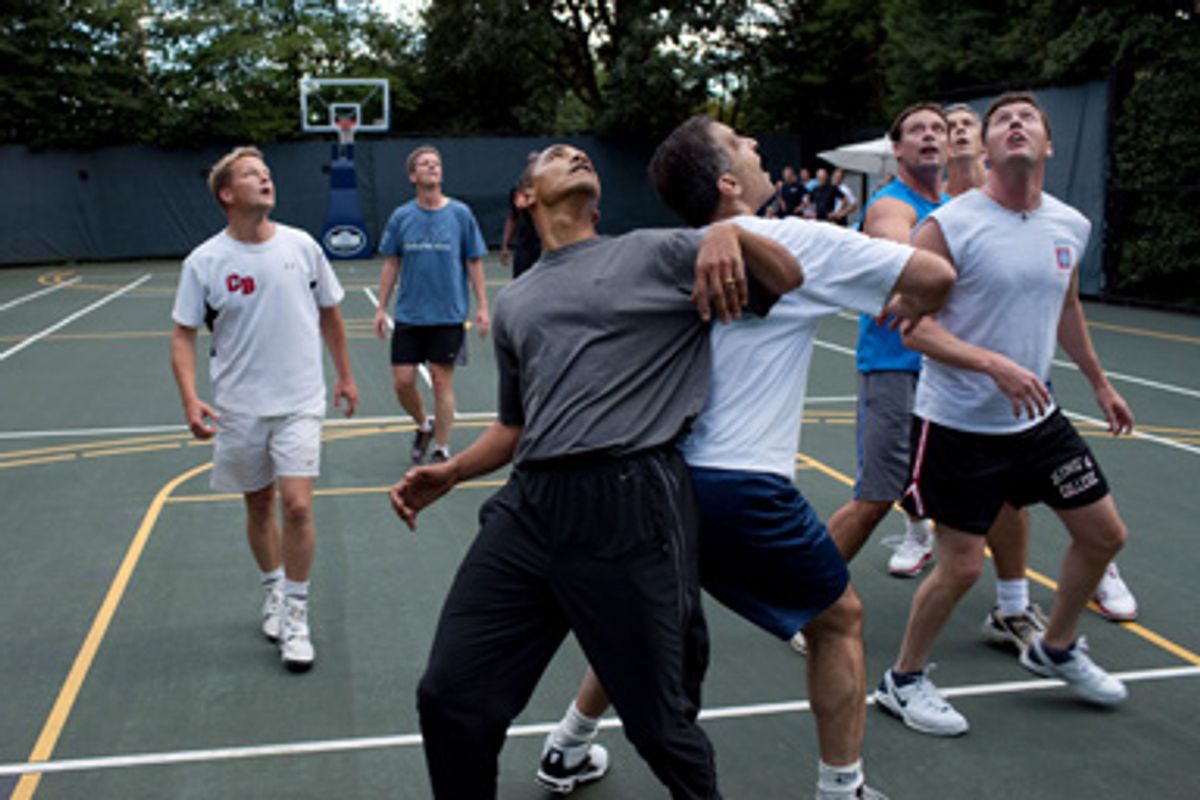 U.S. President Barack Obama, along with Cabinet Secretaries and Members of Congress, watch a shot during a basketball game on the White House court on October 8, 2009
--

A couple of weeks ago, a group of Congress members laced up their sneakers and hit the White House basketball court. What seemed a mere pickup game has turned into a bit of a sex scandal -- because there was not a single woman at the official event. In fact, the resulting noise has been so loud it prompted the New York Times on Sunday to analyze the boys' club mentality of the Obama White House, which is "rife with fist-bumping young men who call each other 'dude' and testosterone-brimming personalities," reports Mark Leibovich.

Testosterone in Washington? No. You don't say.

The very same day as the Times exposé, Obama took domestic policy adviser Melody Barnes golfing; it was the first time he's hit the green with a woman since he was sworn into office. (It was also scheduled before the publication of the article.) But that didn't stop Terry O'Neill, president of the National Organization for Women, from calling the commander in chief's all-male athletic outings "troubling" and insisting "we need to see the White House leading the way for desegregating the workplaces all around the country."

O'Neill is just the latest to join the chorus of criticism. CBS News reported that no women have been listed as players in the president's many sporting events, including his regular basketball games. This led Amy Siskind to suggest on the Huffington Post that perhaps the president has a "woman problem" or is "uncomfortable around women." After all, it isn't as though Obama doesn't have access to any capable female players: Health and Human Services Secretary Kathleen Sebelius made her college basketball team, which she pointed out when Jay Leno asked her on-air how she would fare against  Obama in a game of "H-O-R-S-E." Then, in a move that has won her a permanent place in my heart, she challenged the prez to "bring it on."

Last week, Obama called all the criticism "bunk," explaining that he simply invited the House of Representatives' regular basketball players for a game at the White House. "I don't know if there are women who -- were Members of Congress who play basketball on a regular basis," he told NBC News. "I don't think there are. You know, I don't think it sends any kind of message or signal whatsoever." In other words, the ballplayers didn't institute a "no girls allowed" rule as was widely reported and hinted at. Obama didn't hand-pick the politicos who hit the court; he invited an established crew of pickup game players and, as it happens, they were all men.

It's absurd to expect Obama to gender-balance every one of his extracurricular activities, but a distinction can be reasonably made between what he does during his limited free time and what he does in his official capacity as president. The game was on his official press schedule and no doubt provided a networking opportunity and a way to score extra face time with the big boss-man. There is no denying that women's exclusion from these professional bonding rituals is nothing new, and that it hits a sore spot for many women. I'm reminded of an episode from the second season of "Mad Men" in which a plucky Peggy Olson surprises the guys by showing up for drinks with an important client at a burlesque bar (she refused to let some nipple tassels get in the way of her ladder climb).

There is a tremendous difference between doing business at a topless bar and organizing a pickup game with co-workers, though. And, as a woman who has always tried to play ball, literally and figuratively, with the boys, I couldn't help rolling my eyes at the critique of Obama's supposedly sexist sporting habits. As a feminist, I find it embarrassing, frankly. I'm all for political and workplace parity, but surely the president should be allowed to bond with his colleagues in a number of different ways, right? We don't really want to require that he only hold official events with 50-50 sexual representation, do we? Or that he form a knitting circle, or some other stereotypically female-friendly club, as a means of connecting with congresswomen?

Truth is, if there's a dominant male culture in the White House it's more reasonably blamed on the gender divide that is already deeply entrenched in politics. Changing that isn't an issue of holding a basketball game with both male and female Congress members (although, hey, that would be great); it's an issue of balancing power in Washington and, to his credit, Obama has selected more women for his Cabinet than any other president. Clearly, there's still plenty more work to be done and I'm holding out hope the president's performance on that front will be as impressive as his jump shot. In the meantime, I sincerely hope he takes up Kathleen Sebelius on her one-on-one challenge.