The blowback from the Baghdad bombings

Two blasts kill more than 100 in Iraq. Will hawks use the attacks to argue against American troop withdrawal? 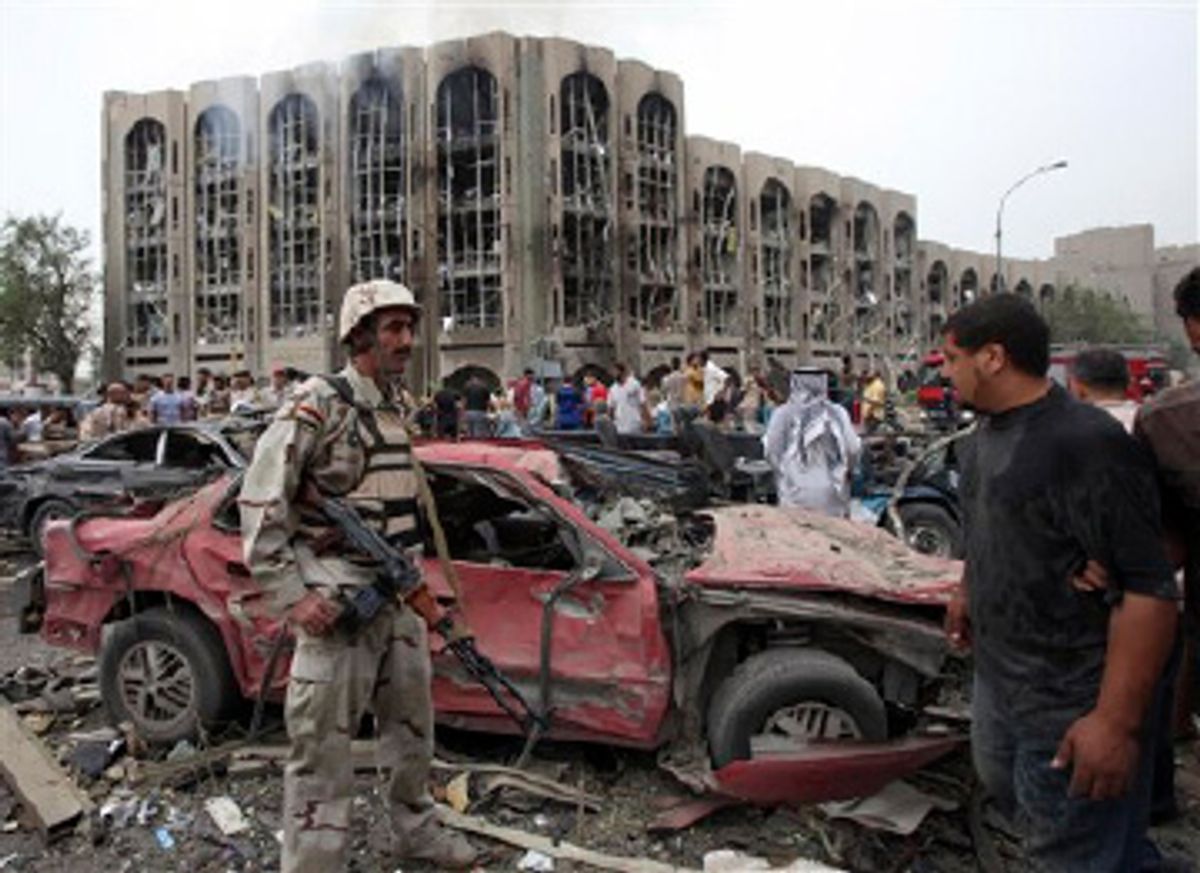 Two massive blasts shook central Baghdad on Sunday, killing at least 136 people and wounding 500, and destroying three government ministry buildings, according to the Times of London's Oliver August reporting from Baghdad. (The total has now been revised upward to at least 155.) It was the most destructive attack of 2009. August notes that the likely perpetrators were either Baathists from the old regime or Sunni Muslim extremists, both of whom want to stop a new, Shiite- and Kurdish-dominated status quo from settling upon Iraq.

AFP Arabic service says that the first car exploded at 10 a.m. Baghdad time at a crowded intersection near the Ministry of Justice and the Ministry of Municipalities. The second was detonated 10 minutes later on Salihiya Street in front of the Baghdad Province administrative office. Many dead bodies are suspected of still being beneath the rubble of the ministries of justice and public works buildings, which collapsed on the employees.

The ministries were protected by blast walls and the truck bombs could not get that close, but the explosives used were so ungodly powerful that they swept the blast walls away. I have no pretensions to forensics expertise, but that sounds like a clue to me; where are the guerrillas getting such remarkable high explosives?

The particular ministries that were struck may be significant, since Iraq operates on a spoils system and ministries tend to be dominated by political parties and ethnic groups. The minister of public works is Riyadh Gharib, a prominent member of the Islamic Supreme Council of Iraq, which is close to the clerics in Tehran. Public Works as a ministry would thus have a lot of ISCI party members as employees and it is also a huge source of political patronage. Baathists or Sunni extremists would have every reason to hit it.

The Ministry of Justice had been less politicized, but from 2007 was in the control of the Shiite United Iraqi Alliance. The minister of justice from last February is Judge Dara Nur al-Din, an independent Kurd. He had been a member of the Interim Governing Council under Paul Bremer, for which some groups in Iraq may not have forgiven him. The Ministry of Justice also oversees court cases and executions, including of prominent Baathists, executions that Nur al-Din has defended, and which have angered the anti-government guerrillas.

As for the Baghdad Provincial government (it is both a province and a city), it has been dominated since the January 2009 provincial elections by the State of Law coalition of Prime Minister Nouri al-Maliki, the leading element of which is the Shiite Islamic Mission Party (Da'wa).

So if the guerrillas who set these bombs were trying to kill party cadres attached to ministries, you'd have to conclude they were trying to kill those of the ruling Shiite religious parties, and also to take revenge on the new regime for the Ministry of Justice's executions of Baathists and Sunnis.

The attacks inevitably had implications for the January 2010 parliamentary elections, insofar as they make Prime Minister Nouri al-Maliki and his ascendant Islamic Mission Party look incompetent in providing security. Since al-Maliki has done a fair job of restoring security to cities such as Basra, this success is a campaign talking point for him, which the guerrillas are attempting to deflect.

There are two dangers here. One is that U.S. hawks will make such attacks a pretext for delaying U.S. troop withdrawal. These sorts of attacks happened all the time when the U.S. troops were patrolling Baghdad, and they only ever were stopped by extreme measures that were impractical for the long run, such as walling off whole neighborhoods and producing 80 percent unemployment.

The second is that Nouri al-Maliki will attempt to deflect any blame for the blasts onto Syria, which he views as harboring Baathist elements who plan these attacks out. Shaky revolutionary regimes like that of Baghdad often go to war to shore themselves up, and Iraq-Syria border clashes are not impossible.

The U.S. Republican Party's avaricious and illegal war on Iraq destabilized the eastern Mediterranean, perhaps for decades, creating long-term challenges to U.S. and global security of which the Baghdad blasts are very possibly only minor omens.