What the U.S. military can't do

Obama's choice: Failed war president, or the prince of peace 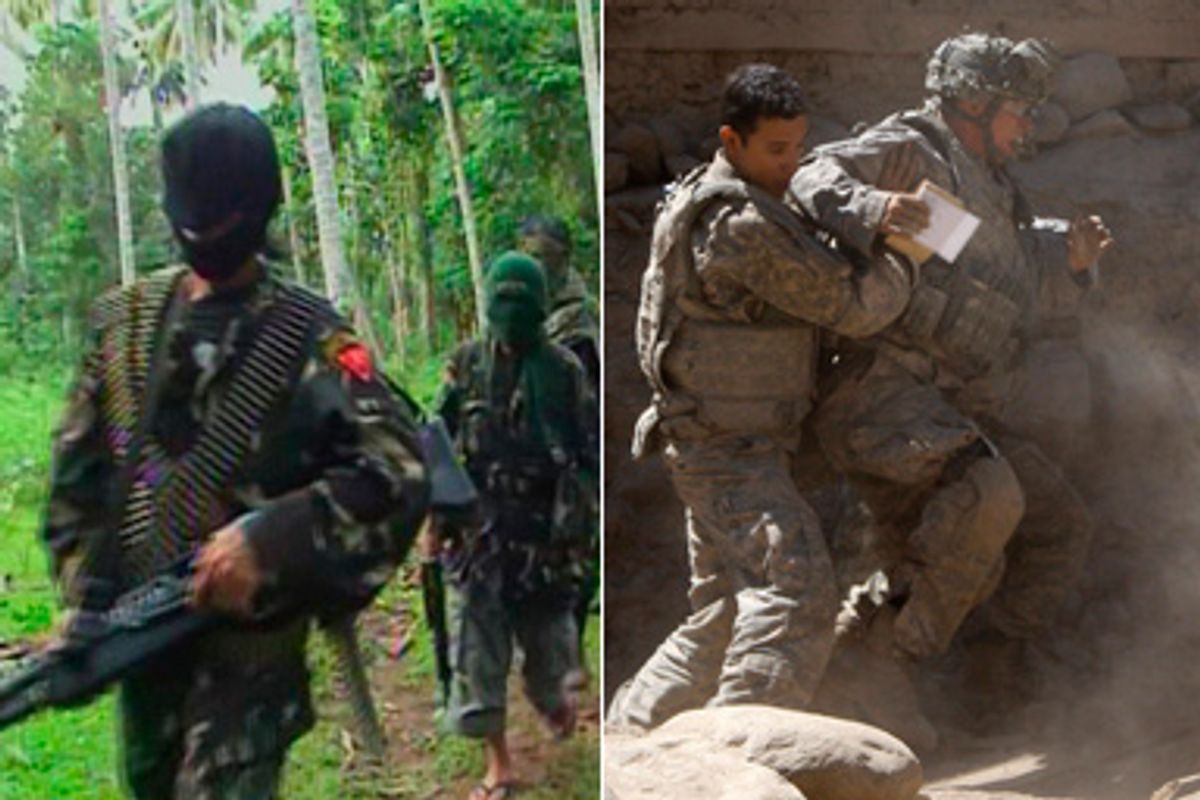 Left: Abu Sayyaf rebels are seen in the Philippines in this video grab made available February 6, 2009. Right: U.S. soldiers help a comrade wounded in the leg during a gun-battle with Taliban fighters in the village of Bargematal, Nuristan province, August 23, 2009.
--

When the Nobel Committee awarded its annual peace prize to President Barack Obama, it afforded him a golden opportunity seldom offered to American war presidents: the possibility of success. Should he decide to go the peacemaker route, Obama stands a chance of really accomplishing something significant. On the other hand, history suggests that the path of war is a surefire loser. As president after president has discovered, especially since World War II, the U.S. military simply can't seal the deal on winning a war.

While the armed forces can do many things, the one thing that has generally escaped them is that ultimate endpoint: lasting victory. This might have been driven home recently -- had anyone noticed -- when, in the midst of the Washington debate over the Afghan war, a forgotten front in President George W. Bush's global war on terror, the Philippines popped back into the news. On Sept. 25, New York Times correspondent Norimitsu Onishi wrote:

Early this decade, American soldiers landed on the island of Basilan, here in the southern Philippines, to help root out the militant Islamic separatist group Abu Sayyaf. Now, Basilan's biggest towns, once overrun by Abu Sayyaf and criminal groups, have become safe enough that a local Avon lady trolls unworriedly for customers. Still, despite seven years of joint military missions and American development projects, much of the island outside main towns like Lamitan remains unsafe.

In attempting to explain the uneven progress of U.S. counterinsurgency operations against Muslim guerrillas in the region after the better part of a decade, Onishi also noted, "Basilan, like many other Muslim and Christian areas in the southern Philippines, has a long history of political violence, clan warfare and corruption." While he remained silent about events prior to the 1990s, his newspaper had offered this reasonably rosy assessment of U.S. counterinsurgency efforts against Muslim guerrillas on the same island -- 100 years earlier:

Detachments of the Twenty-third and Twenty-fifth Infantry, with constabulary and armed launches assisting, are engaged in disarming the Moros on Basilan Island. The troops are distributed around the coast and are co-operating in a series of closing-in movements.

Days after Onishi's report appeared, two American soldiers were killed on nearby Jolo Island. As a Reuters story noted, it "was the first deadly strike against U.S. forces deployed in the southern Philippines since a soldier in a restaurant was killed in 2002." As in Basilan, however, the U.S. counterinsurgency story in Jolo actually goes back a long way. In early January 1905, to cite just one example, two members of the U.S. military -- the 14th Cavalry -- were killed during pacification operations on that same island.

That U.S. forces are attempting to defeat Muslim guerrillas on the same two tiny islands a century later should perhaps give Obama pause as he weighs his options in Afghanistan and considers his recent award. It might also be worth his time to assess the military's record of success in conflicts since World War II, starting with the stalemate war in Korea that began in June 1950 and has yet to end in peace, let alone victory. That quiescent but unsettled conflict provides a ready-made opportunity for the president to achieve a triumph that has long escaped the U.S. military. He could help make a lasting peace on a de-nuclearized Korean peninsula and so begin earning his recent award.

Vietnam and beyond
At the moment, Obama and his fellow Washington power players are reportedly immersed in the literature of the Vietnam War in an attempt to use history as a divining rod for discovering a path forward in Afghanistan. At the Pentagon, many evidently still cling to the notion that the conflict was lost thanks to the weakness of public support in the U.S., pessimistic reporting by the media, and politicians without backbones.

Obama would do well to ignore their revisionist reading list for a simple reason: Bluntly put, the U.S.-funded French military effort to defeat Vietnamese nationalism in the early 1950s failed dismally; then, a U.S.-funded effort to set up and arm a viable government in South Vietnam failed dismally; and finally, the U.S. military's full-scale, years-long effort to destroy the Vietnamese forces arrayed against it failed even more dismally -- and not in the cities and towns of the United States, nor even in the halls of power in Washington, but in the hamlets of South Vietnam. U.S. efforts in neighboring Cambodia and Laos similarly crashed and burned.

Victory aside, the U.S. military proved capable during the Vietnam War of accomplishing much. Its true achievement lay in the merciless pummeling it gave the people of Southeast Asia, leaving the region blood soaked, heavily cratered, significantly poisoned, and littered with explosives, which kill and maim villagers to this day.

In the wake of out-and-out defeat in Indochina, Americans diagnosed themselves as suffering from a "Vietnam syndrome" (resulting in a less muscular foreign policy -- embarrassing for a global superpower) and in need of a victory cure. In the 1980s and 1990s, this led to "triumphs" over such powers as the tiny Caribbean island of Grenada and Panama, a country whose "defense forces," in total, numbered just 12,000 (about half the size of the U.S. ground troops in the invading force) -- and cut-and-run flops in Lebanon and Somalia.

The "lessons" of Vietnam were declared officially buried forever in the scorching deserts of the Middle East in March 1991. "By God, we've kicked the Vietnam syndrome once and for all!" President George H.W. Bush triumphantly exclaimed at the end of the first Gulf War -- and yet Saddam Hussein, the enemy autocrat, remained firmly ensconced in power in Baghdad and the conflict continued at a less-than-triumphant simmer for over a decade until his son, George W. Bush, again took the country to war against the same Iraqi leader his father had fought, and again declared the mission accomplished.

Following a lightning-fast march on Baghdad in 2003, much like the speedy pseudo-victory in Kuwait in Gulf War I, U.S. forces again proved unable to seal the deal. Bush administration efforts to dominate the country politically by writing Iraq's constitution, while circumventing real elections, were quickly laid low by Iraq's most powerful religious leader, the Shiite cleric Grand Ayatollah Ali al-Sistani. Then, the U.S. military was sent reeling for years by a Sunni insurgency. Though violence is currently tamped down to what is often called "an acceptable level," Iraq remains a war zone and Barack Obama is the fourth president to preside over a seemingly never-ending, irresolvable set of conflicts in that country. (The U.S.-allied Iraqi government has already proclaimed the U.S. a loser, announcing a "great victory" over the U.S. occupation in June 2009 and comparing the withdrawal of most U.S. forces from the country's cities to a historic 1920 Iraqi revolt against British forces. American officials have not disagreed.)

During the 1980s, U.S. proxies in Afghanistan, Muslim mujahedin guerrillas, fought the Soviet occupation. Today, U.S. troops are the occupiers, fighting some of those same mujahedin, and in the ninth year of this latest war in Afghanistan, victory still appears to be nowhere on the mountainous horizon, while failure, according to Gen. Stanley McChrystal, the Afghan war commander, is once again a possibility.

Late last year, at the 26th Army Science Conference, I listened to one of the top-ranking enlisted men in the Army, a highly decorated veteran of the global war on terror, and a draftee during America's losing war in Vietnam, candidly admit that U.S. troops in Afghanistan simply could not keep up with enemy forces. The lightly armed, body-armor-less guerrillas were too mobile and too agile, he said, for the up-armored, heavily weighed-down American troops. When I asked him about the comment later, a colleague of the same rank and fellow global war on terror veteran quickly jumped to his defense, declaring, "Yeah, I can't run the mountain with them, but I'll still get them -- eventually." Almost a year later, the better part of a decade into the fight, the unanswered question remains, When?

Peace president
The U.S. military is unquestionably powerful and has repeatedly demonstrated the ability to mete out tremendous amounts of destruction and death. From Korea, Vietnam and Cambodia to Iraq and Afghanistan, enemy fighters and unfortunate civilians, military base camps and people's homes have been laid waste by U.S. forces in decade after decade of conflict. Yet sealing the deal has been another matter entirely. Victory has repeatedly slipped through the fingers of American presidents, no matter how much technology and ordnance have been unleashed on the poor, sometimes preindustrial populations of America's war zones.

Now, the Nobel Committee has made a remarkable gamble. It has seen fit to offer Barack Obama, who entered the Oval Office as a war president and soon doubled down the U.S. bet on the expanding conflict in Afghanistan and Pakistan, an opportunity for a lasting legacy and real achievement of a sort that has long escaped American presidents. Their prize gives him an opportunity to step back and consider the history of American war making and what the U.S. military is really capable of doing thousands of miles from home. It's an unparalleled opportunity to face up honestly to the repeatedly demonstrated limits of American military power. It's also the president's chance to transform himself from war maker by inheritance to his own kind of peacemaker, and so display a skill possessed by few previous presidents. He could achieve a more lasting victory, while limiting the blood, American and foreign, on his -- and all Americans' -- hands.

More than 100 years after their early counterinsurgency efforts on two tiny islands in the Philippines, U.S. troops are still dying there at the hands of Muslim guerrillas. More than 50 years later, the U.S. still garrisons the southern part of the Korean peninsula as a result of a stalemated war and a peace as yet unmade. More recently, the American experience has included outright defeat in Vietnam, failures in Laos and Cambodia; debacles in Lebanon and Somalia; a never-ending four-president-long war in Iraq; and almost a decade of wheel-spinning in Afghanistan without any sign of success, no less victory. What could make the limits of American power any clearer?

The record should be as sobering as it is dismal, while the cost to the peoples in those countries is as appalling as it is unfathomable to Americans. The blood and futility of this American past ought to be apparent to Nobel Peace Prize-winner Obama, even if his predecessors have been incredibly resistant to clear-eyed assessments of American power or the real consequences of U.S. wars.