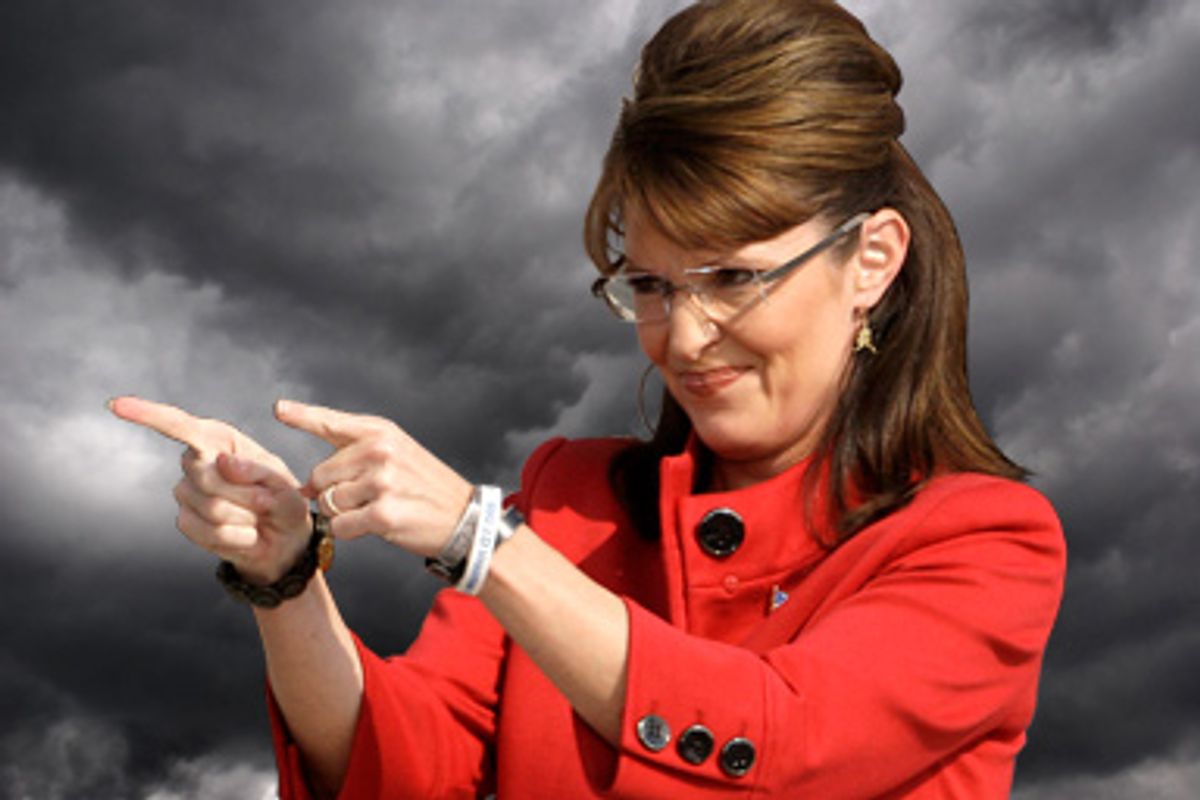 Lynn Vincent made headlines when she was selected as the ghostwriter for Sarah Palin's soon-to-be-bestselling memoir, "Going Rogue." As an editor at the Christian World magazine, Vincent has railed against abortion rights, gay marriage and the theory of evolution. She is also the coauthor of the book "Donkey Cons," which purports to prove, among other claims, "how Franklin Roosevelt, Harry Truman, and John F. Kennedy were elected with the help of the mob." Her coauthor on that book, Robert Stacey McCain (no relation to John McCain) has spoken out against interracial marriage.

Salon recently obtained this private diary, which we publish here in excerpted form.

I'm standing in a conference room at the Hotel Del, when in she walks. I know Danny (and a thousand others) are going to ask me what it was like to finally meet her. In a word: weird. She's shorter than I thought she'd be, her head is larger, but her features are so familiar that staring at her is like déjà vu.

The room is supposed to be private, but obviously someone leaked, and before we can even be properly introduced, there's a mob outside. One guy has photos of aborted fetuses he wants her to sign for Operation Rescue. Another guy, in a golf shirt, yells, "The magic Negro is making my money disappear, Sarah!" An elderly woman is weeping, pleading for SP to sign a photo for her grandson, who was wounded in Afghanistan.

For a second I think she's going to sign one of the fetus photos for the woman, which seems somehow inappropriate. But then an aide hands her an official portrait, and she ushers the grandma into a quiet corner so they can talk.

I think maybe she's putting on a show for me. Then I realize: This is really just her life, ministering to those in tribulation over the dark turns our country has taken. She can no more turn away from her flock than He did.

Someone yells, "When are we going to get our country back?"

Lars, her security chief, is furious. He hustles her toward the freight elevator.

Before we start the formal interview process, I can't stop myself from asking her: Why me? Why not some bigger, more established name, a Robert Lindsey or Mark Salter? SP takes a sip of her energy drink and narrows her eyes.

"If I'd wanted a company man," she says, "I'd have hired one. Lindsey would have given his left nut -- excuse my French -- to be sitting in that chair. But I want someone who gets it. Who gets that abortion kills more people in this country than cancer, who gets that the Bible is history, that we didn't just tumble out of the trees and start walking upright. I wanted someone, Lynn, who gets that God isn't the spare tire. He's the steering wheel."

I feel a dizzy jolt in my chest. "Wait a second," I say. "Have you been reading the inspirational quotes on my blog?"

The lawyers want to talk structure. Won't everything be easier if we have a plan in place? "That's not really how I work," I say. "For me, it's more about stories." SP gazes at me for a moment, then banishes the lawyers.

We order in from Outback, move out to the balcony to eat. We can see the dunes, the palm trees, the golf course. SP starts telling me about the lean years, after the elopement. "We didn't have any money for some elitist wedding. I spent four years pulling fish guts with Todd, feeding the babies with that stink still on me. That's something these affirmative action trust-fund whiners will never understand. They don't know what it's like to build yourself up from nothing, one reeking hope at a time."

"Those who speak so cruelly about me," she says softly, "about my motives -- they don't have the first idea who I really am." Suddenly, SP turns to face me and places her hand over her heart. "The thing we gotta do, Lynn Vincent, is transfer what's in here --" She lifts her hand from her heart and lowers it onto mine -- "over here." Her huge, beautiful face is hovering in front of mine and I can smell the blooming onion on her breath and I realize, with a start, that if you were on the ground below, some stranger watching us in the dark, we might look like sisters about to embrace.

On her dad, Charlie, a science teacher: "One day, on the way home from church, I was maybe 8, I said, ‘Daddy, if we have God watching over us, why do we need science? And Daddy says, ‘Honey, it's up to us to help God.'"

SP asks about my hitch with the Navy. She seems a little disappointed when I tell her that I was not actually trained as a Seal. I did on-base stuff at Miramar, mostly air traffic control. "That's my one big regret," she says, "that I never took up arms in defense of this country. I guess I was too busy being a mom."

I tell her there are lots of ways to defend the homeland, that the Navy isn't necessarily the most devout organization anyway. They've been sh*tcanning chaplains for daring to preach the Gospels. Plus all these radical gays. "As commander in chief you'd have something to say about that," I say.

"Yeah," she says. "But what I'd really like is to fire some large munitions."

SP calls at 10 and asks me to swing by. The kids are down. Todd's out doing paint ball (he's joined a league already, somehow). I get the feeling she's lonely.

I find her in her bathrobe, swigging from an energy drink the size of a pony keg.

"Heck, yeah," she says, and pulls out a case of shiraz some donor dropped off.

We work our way through a bottle and talk off-shore drilling and the Pauline Epistles and that somehow gets us onto pilates and whether it's a Spanish word, or Italian. We're eating olives and brie and at some point I hear this polite little fart.

We both crack up.

But then Trig starts fussing, and Piper wakes up sniffling about a bad dream, and SP hurries into their room, in full mommy mode. I can hear her quieting the girl. ("No, honey, Joe Biden is not hiding in your closet. See? Look -- no Joe Biden. Just shoes.")

Trig starts bawling and she makes him a bottle and combs out Piper's hair. I step onto the balcony and watch this tableaux. It's the strangest sensation, like I'm having a vision of America as the Promised Land, the pool below glowing blue and the smell of French fries drifting in from somewhere and the murmur of the TVs pulsing from the rooms all around us, the warm bustle of the grid alight. And SP at the center of all this, steadfast, tireless, a media-age matriarch daring to stand against the calm murderers of the unborn, the catamites and mongrels, against the cruel voices who seek to damn us for our prosperity, for the simple crime of having been born on the right side of God.

SP calls on an urgent matter. Someone has told her that Rachel Maddow is a lesbo. "Is this true, Lynn?"

I hear her gulp her energy drink. "Wait a second," she says. "Do her bosses know?"

SP in no mood to talk. Saw Levi running his mouth on cable. Someone's hacked her Facebook page. Then Todd shows up with paint all over his shoes, and she loses it. "Decompression time," she says. We head out to the shooting range. SP has her own sidearm holster (stitched leather, a gift, reported) and her own weapon (big, purchased at Wasilla County Fair).

I hold Trig while she works through a round, methodical, squinting, her cheeks spiraling with blood. Magnum therapy, she calls it. After, she has me touch the hot barrel. "You recognize that feeling, Lynn? That's freedom." Then she hustles Trig out to the parking lot to stop his crying.

Just for giggles, we YouTube her sportscaster clips. That hair!

"And to think," SP says, "I once dreamed of blowing Keith Olbermann."

I think I'm going to be sick.

SP on polls: "A person with God on her side is always in the majority."

Campaign rehash last night. SP says they were treated like hicks. "The whole sickness in America is people looking down on us," she says. "That's why the media didn't like me. Because I wouldn't bend over like most politicians and take it. Todd is still livid about the speech she wanted to give on election night.

He's screaming and gesturing with his beer when Piper pads in from the TV room, rubbing her eyes.

"Glenn Beck's crying again," she says. "Why is he always crying, Mommy?"

SP gathers her into a hug. "He's crying because it hurts to love your country so much."

"Oh, here's a story," SP says. "I remember this one night when daddy was helping me with the cross-country team. I was doing 440 sprints, ‘lung scrapers' they're called. Did 10 straights until I fell down and puked on the track and daddy came over and touched my cheek and said, 'It's OK, baby girl. Just two more. God never gives you more than you can handle.'" Then she starts tearing up.

"People need to understand I'm not giving up, Lynn. Ever."

"What about the governorship?" I say quietly.

Back from meeting the editors. They have that shallow NYC confidence. The happy scripture of marketing. SP lets them talk and talk and talk. Then she stares at the head guy Jonathan and says, "No offense, Jonathan. But this is going to be a book for people who pray."

SP returns to AK tomorrow. A very emotional final session for the book. She keeps wanting to talk about her children. She weeps to think of them inheriting a fallen world. This is what drives her: the possibility of every precious life redeemed. She uses the phrase again and again. Before I head home, we kneel together in prayer.

“You know what I dream sometimes?” she whispers. “I dream that all of my children will someday be able to walk the streets of this land without fear in their hearts." She hugs me with an almost violent sense of conviction. "In my America, the one I hope to build, I honestly believe that could happen."