The Chamber of Commerce is mad as hell

The business lobby has had an awful fall. But suing the pranksters who made fun of it will only make things worse 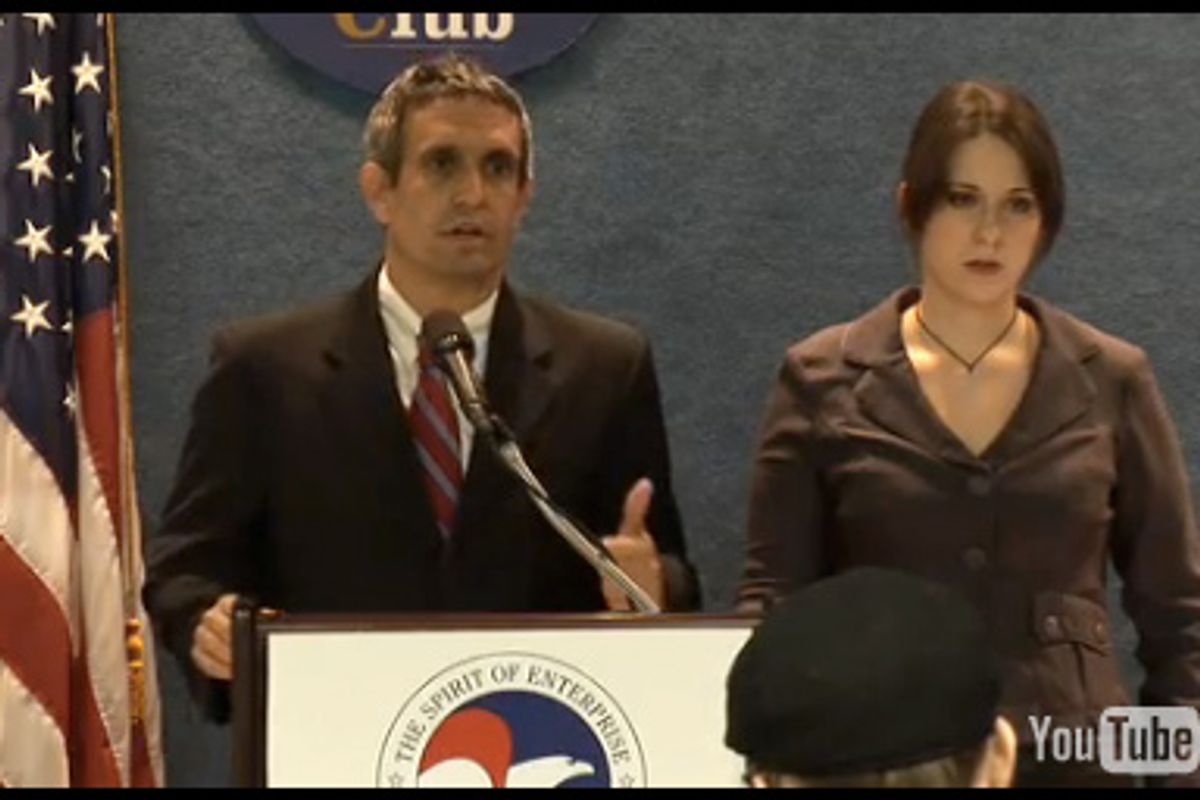 The last few months have not been kind to the U.S. Chamber of Commerce. The president of the United States called the organization out for its "completely false" advertisements. It has been hammered by weeks of bad press as blue-chip Fortune 500 companies abandoned its standard, citing its troglodyte stance on climate change.  The slings and arrows of a cacophony of online critics, mocking its August call for a Scopes Monkey Trial of the 21st century to disprove the science of human-caused global warming, have been relentless.

But none of those indignities compare with the worst humiliation: Being made fun of.

In one of the more well-executed and sophisticated pranks in modern memory, the Yes Men faked a press conference on Oct. 19, announcing that the Chamber had changed its position on climate change. Some big-name news organizations, including the New York Times and Reuters, fell for the stunt. The result: The U.S. Chamber of Commerce is spitting mad, and on Monday the organization filed a complaint in U.S. District Court in Washington D.C., seeking redress for "the Defendants' fraudulent acts and misappropriation of its valuable intellectual property."

You might think that an organization boasting as long a history and as much accumulated savvy about how the American political system works as the U.S. Chamber of Commerce would know better than to pick a fight with satirical hoaxsters who will only gain from more publicity. This is not the kind of behavior we expect from such an august institution. As Corynne McSherry, a staff attorney at the Electronic Frontier Foundation, which is representing the Yes Men in its legal battle with the Chamber, told Salon, "We are surprised and disappointed that the Chamber of Commerce has chosen to go to court over obvious political criticism."

But the foundation of the Chamber's complaint is that the Yes Men are not engaging in legitimate political criticism, that in fact their real aim is to commercially profit from their Chamber impersonation.

From the complaint (Italics mine):

Defendants had a common plan to engage in acts that violated multiple laws. These acts deceived the press and public, and caused injury to the Chamber, while promoting the commercial ventures of certain of the Defendants who trade under the name "The Yes Men." The acts are nothing less than commercial identity theft masquerading as social activism. These infringing and fraudulent acts are antithetical to public debate on important issues, because they prevent the public and the press from knowing the true position of the intellectual property owner whose trademarks and copyrights were used without permission, and they disguise the true motives of the persons who took that property. In short, such conduct is destructive of public discourse, and cannot be tolerated under the law.

Some might argue that the Chamber of Commerce, which has been fighting tooth and nail to hamstring government efforts at accomplishing both financial sector reform and limiting greenhouse gas emissions, has done more damage to public discourse through its self-interested lobbying than anything that a handful of comedians might have accomplished. Others might wonder whether, deep in the woods of the 21st century, when every possible aspect of human civilization has been commodified and commercialized, any meaningful contradiction still exists between the goals of social activism and the goals of commercial profit. A social activist still has to eat, right? Isn't it in the best tradition of American entrepreneurship that one should be able to capitalize on one's political activity? Doesn't that fit in with the Chamber's (trademarked) slogan "The Spirit of Enterprise"?

But following the twists and turns of this truly postmodern case will be interesting, because, at least judging from the Chamber's complaint (which is far more informative about how the hoax was accomplished than any news report I've seen has yet managed to put together), the Yes Men did explicitly set up their prank as part of the publicity for a new movie,"The Yes Men Fix the World," that premiered days afterward. And the Yes Men do stand to profit from their successful impersonation.

More from the complaint:

Defendant Servin's and Defendant Vamos are actors, screenwriters, directors, and entrepreneurs whose ventures include multiple web sites, blogs, an online store, a book, and two motion pictures. Whether operating under one of their many individual aliases or collectively as the "Yes Men," the tactics of Servin and Vamos are designed to drive business to their ventures and generate sales of merchandise, including t-shirts ($20.00), DVD's of their 2004 movie, "The Yes Men" ($20.00), the Yes Men book, -- signed by the authors -- ($14.95) and movie posters ($20.00). For those inclined to purchase, the Yes Men's store accepts MasterCard, Visa, American Express, and Diner's Club.

Is the implication here that if you accept major credit cards, you undermine the integrity of your political activism? Does anyone at the Chamber understand the ludicrous irony of a lobbying organization that exists to protect the profits of its clients against all encroachment criticizing others for their pecuniary motivations?

The Chamber claims that it has suffered monetary damages from the Yes Men's satire, and it is asking not only that the Court order the Yes Men to cease any or all activities referencing the Chamber's activities, but that the Chamber be granted a portion of whatever profits the Yes Men reap in the future. This is the equivalent of a multi-car irony pileup.

But the funniest part of this whole story is the Chamber's complaint that the Yes Men's parody "has caused harm to the reputation and goodwill of the Chamber."

Sorry, guys, but you pulled off that feat all by your lonesome.

How The World Works Satire