The tax breaks that ate America

The greatest threat to the U.S. economy is not creeping socialism. It's creeping subsidism 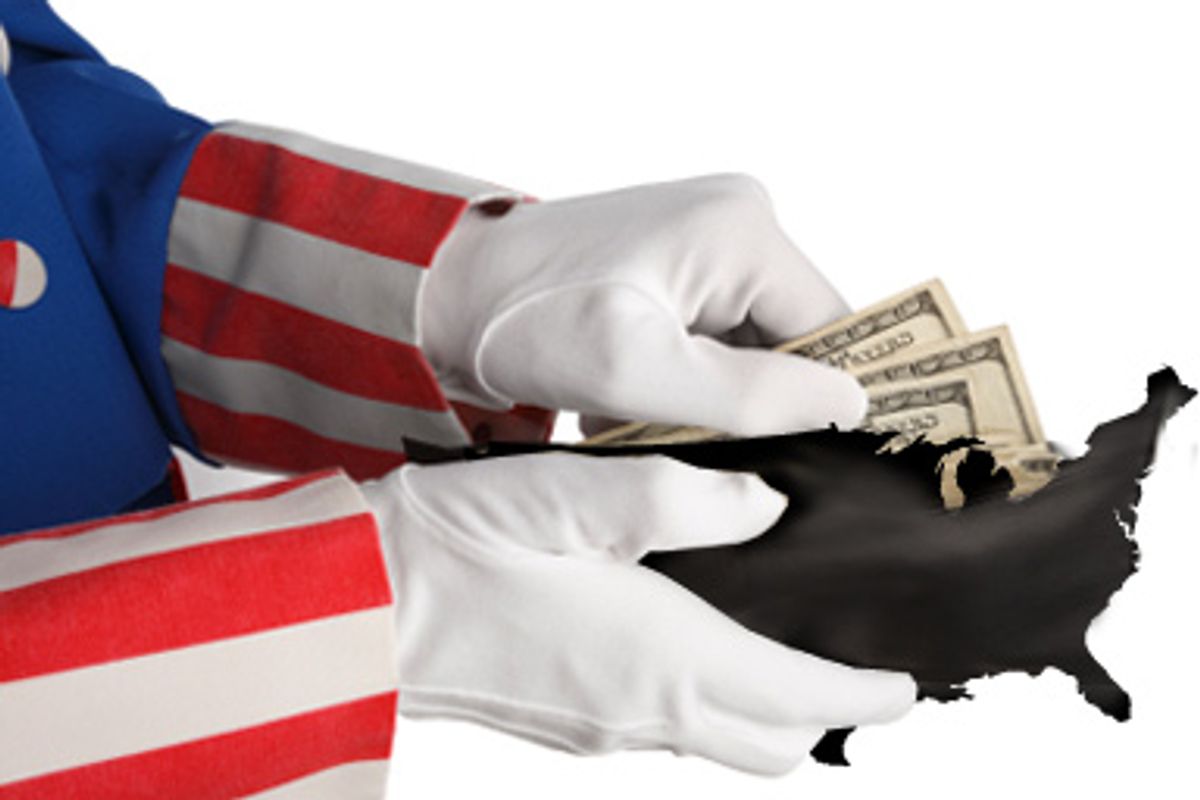 Here's the latest bold new idea for reconciling the costs of national defense with the need to avoid adding to federal deficits or raising taxes. A bipartisan coalition of "New Democrats" and moderate Republicans has proposed buying weapons for the U.S. military through the IRS rather than the Pentagon. Here's how it would work. Instead of being paid to deliver planes, missiles and tanks, defense contractors would receive "weapon supply tax credits" (WSTC). The defense contractors would be able to reduce the taxes they owed the federal government by the prices of the weapons they delivered. Because the tax credit would be refundable, if the prices exceeded a firm's annual tax liability, the IRS would send a check to the firm in the amount of the difference. In this way, the federal government could finance a massive military buildup -- and because tax credits aren't counted as part of the federal budget, for official purposes the cost of the buildup would be zero!

I had you going there for a minute, didn't I? The "weapons supply tax credit" is a joke. It was proposed some years ago by the late David Bradford, a Princeton economist who worked in the Ford and George H.W. Bush administrations. Bradford's purpose was to ridicule the growing reliance of Congresses and presidents on tax credits and other so-called tax expenditures as an alternative to ordinary spending programs funded by ordinary taxes.

The weapons supply tax credit is no crazier than the major tax expenditures that shape -- no, make that disfigure -- the political economy of early 21st century America. Instead of raising taxes to pay for universal healthcare, as many other nations do, the federal government grants a $250 billion a year tax break to employers to give them an incentive to buy healthcare for their employees. Hey, that approach really worked out well, didn't it?

And then there's America's biggest antipoverty program, the Earned Income Tax Credit (EITC). By means of the EITC, the federal government "tops up" the wages of full-time workers who are trapped in poverty. Needless to say, this is also a massive subsidy to employers who pay poverty wages to their workers, and to consumers who buy goods and services produced by poverty-wage workers. You'd think the more straightforward approach would be to ensure that anybody who works 40 hours a week doesn't need to rely on welfare, with entry-level public employment mopping up most remaining unemployment. You'd think.

Did I mention the home mortgage interest deduction? This costs the Treasury around $80 billion a year in lost tax revenue that must be paid for by other taxes if it is not to enlarge the deficit. This program, justified on the grounds that it promotes home ownership, in practice showers government subsidies chiefly on rich and upper-middle-class homeowners. Some countries like Canada that lack such a tax expenditure have higher rates of homeownership than the U.S.

The political scientist Christopher Howard calls the tax expenditure system the "hidden welfare state." It might just as well be called the Blob That Ate the Economy. If only non-business subsidies to individuals are counted, the IRS-administered subsidy sector costs around $800 billion a year. That's about 6 percent of U.S. GDP, or about a fifth of the total official expenditure of the federal, state and local governments combined.

To put that number into perspective, according to official figures the U.S. spends about 30 percent of its GDP on government at all levels -- well below the OECD average of around 36 percent and the EU average of about 39 percent. But add in the "dark matter" of tax expenditures, and federal-state-local spending goes up to around 36 percent of GDP -- close to the international average among developed countries and within range of European norms.

This is something that neither liberals nor conservatives are honest about. Liberals like to invoke official spending numbers to claim that the U.S. spends far less on social welfare purposes than other, similar industrial democracies. That implies that there is room for a massive expansion of federal spending on new purposes -- health, environment, education. But as Jacob Hacker has pointed out, when tax expenditures are factored in, U.S. welfare policies absorb far more of the U.S. economy already than many on the left want to admit. Though it is still short of the half of GDP taken by government in the Nordic democracies, the American public sector, when dark matter is included, is pretty close to Western European levels already.

But conservatives have no reason to gloat about the discovery of the tax-expenditure dark matter -- not if they believe their own rhetoric about free markets and free enterprise. The truth is that tax expenditures warp the market and corrupt private enterprise.

In a mixed economy like that of the U.S. from the Depression until the 1980s, there is a division of labor among well-defined sectors. The government provides public goods -- sometimes directly, as in the case of public K-12 education, and sometimes indirectly, through "state capitalism," by making loans to college students or paying contractors to build roads and bridges. The private sector provides most other goods, from apples to Apples. A limited nonprofit sector made up of universities, hospitals and museums rounds out the mixed economy.

In the new "subsidist" economy that both parties have created in recent decades, the distinctions among public, private and nonprofit sectors are broken down. Government becomes unlimited in ends at the same time that it becomes rigidly limited in means. The means are always the same -- a tax credit that conservatives can describe to their constituents as a "tax cut" and that liberals can describe to their constituents as a spending program. But the ends are unlimited.

Does the annoying nanny-state left want to replace French fries with asparagus spears? Then call for an individual tax credit to encourage healthy eating, and label it a "nudge" in the manner of Richard Thaler and Cass Sunstein. Does the big-government right want to expand healthcare without paying for it? Then call for a tax credit for "medical savings accounts."

Conservatives make little effort to reconcile their libertarian, anti-statist rhetoric with their defense of old subsidies and their call for new ones. For example, they claim to believe that private schools, competing in the market, can deliver better outcomes than public schools. Do they therefore demand for-profit schools that, if they fail, declare bankruptcy and go out of business like stores in a shopping mall? No. They call for government vouchers for private schools. What do government vouchers, paid for by taxpayers, have to do with the "free market" and "free enterprise" and "the private sector"?

Vouchers are also the basis of most conservative healthcare plans. Ironically, the idea of "voucher socialism" as a proposal dates back to certain groups on the left in the early 20th century. Today's "right" consists largely of voucher socialists and apologists for tax breaks for large corporations, banks and insurance companies. To judge by their actions, rather than by their words, most conservatives appear to believe that private enterprise is so congenitally deformed and feeble that it will expire of its own debility unless it is given constant intravenous injections of direct and indirect taxpayer subsidies.

Defeating the Blob may require an alliance of both ends against the middle. When it comes to the subsidy sector, we have a four-party system. Neoliberal New Democrats, like the majority of personnel in the Clinton and Obama administrations, have preferred tax credits to honest spending programs, so they can claim to be in favor of limiting the size of government. Centrist Republicans like tax expenditures for the same reason. The opponents of the ever-expanding subsidy state are found among social democrats on the left and libertarians on the right. Social democrats would prefer direct government spending for public purposes rather than subsidies to rent-seeking middlemen bribed into doing things that the public sector does in better-governed countries. Libertarians -- at least the ones who don't care about being players in the Republican Party -- oppose corporate welfare in the name of the free market.

Social democrats and reasonable libertarians might consider uniting in a grand alliance against the bloated subsidy sector. As a rule, public goods should be provided by the government and private goods by the private sector, with a small contribution from a modest nonprofit sector. Most of the 6 percent or so of GDP that is now converted into the dark matter of tax expenditures needs to be divided between a restored public sector and a restored private sector -- with a rebuilt border between them. The principled left and the principled right can argue about where the border between the public sector and the private sector should be. But at least they can agree that there should be a border, and that the no man's land of the subsidy sector needs to be erased from the map.