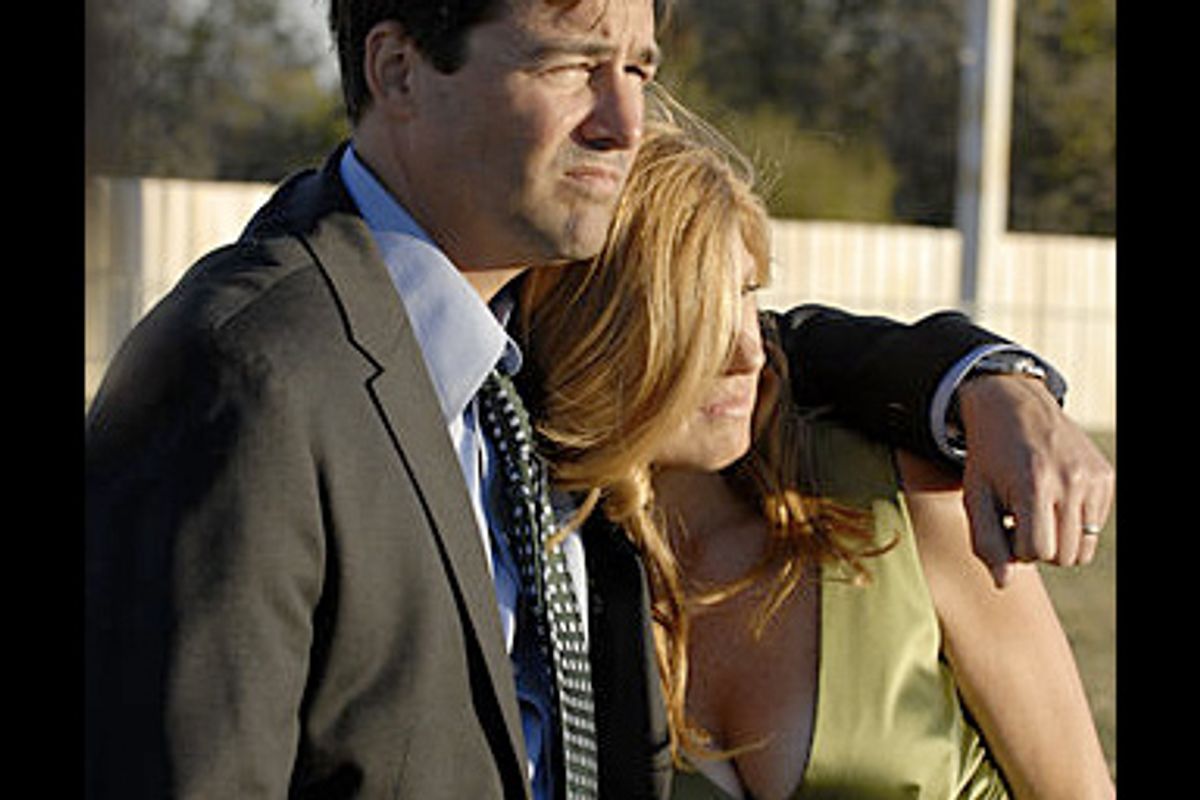 "Y'all look like a bunch of dumb-asses out there!"

Coach Taylor is at his wit's end. After a few triumphant seasons as head coach of the Dillon Panthers football team, he finds himself trying to rally together a brand-new team at a brand-new school, East Dillon High, after the town is redistricted. The field is brown and dusty. The players have never played football before. (Um, wouldn't a few of the good players have ended up at the new school?) Some of the players have criminal records. Others are unaccustomed to being yelled at, or unwilling to run grueling drills in the withering Texas heat.

Although Taylor (Kyle Chandler) may be facing a losing battle for the first time in his career, in its fourth season, "Friday Night Lights" (premieres 9 p.m. Wednesday, Oct. 28, on DirecTV, airing next year on NBC) is just as thoughtful and restrained as it's ever been, with its focus firmly planted on the small-town disappointments of ordinary people.

Thankfully, one of the show's best characters, Matt Saracen (Zach Gilford), who received a scholarship to arts school in Chicago, chose to stay in Dillon to take care of his grandmother. "You're the only person who's never left me," he told her at the end of last season. "I'm not gonna leave you." Despite his talents, Matt takes a job delivering pizzas, and naturally lands on the front doorstep of Dillon star quarterback J.D. McCoy (Jeremy Sumpter), the guy who was gunning for his spot for so long. J.D. has slowly but surely transformed from a naive, alienated rich kid to a certified dick (we knew he'd get there eventually!).

OK, so the rich kid thing is a little cartoonish – while everyone else in town lives in ramshackle little dumps with scrubby front yards, the McCoys inhabit a gigantic mansion. Who knew Dillon even had a nice part of town? And admittedly, some of the scenes in the first episode where jerk quarterback flirts aggressively with Matt's girlfriend Julie (Aimee Teegarden), then engages in shouting and fisticuffs with Matt, do feel a little bit like a flashback to the stereotypical high school clash ("Welcome to the O.C., bitch!"). But there's a major difference: The underdog in this picture had his day as a celebrated hero, and now he's delivering pizzas to them.

But that's a trajectory that "Friday Night Lights" (and the book and movie before it) always set out to trace. High school football stars are heroes in small American towns, but when those glory days are over, what are the kids left with? A pitiful few get football scholarships to college, and a tiny fraction of those eventually go pro. The rest pin their hopes on terrible odds, buoyed along by a cheering crowd, but then wake up one day as nobodies in a place with few job opportunities, wondering what to do next.

Tim Riggins (Taylor Kitsch), who once looked determined to go to college, sits in class for about three seconds before bailing on the whole thing. Obviously Riggins isn't exactly a scholar, but what is he going to do in Dillon, beyond getting drunk, getting batted around by mean rednecks, and sleeping with high school girls? ("What's it like being the guy who used to be Tim Riggins?" one stranger asks him.) This is why longtime characters like Brian "Smash" Williams (Gaius Charles), Jason Street (Scott Porter) and many others had to leave the show -- how many stories about rudderless high school graduates in a small town can you service at once?

Nonetheless, the real glory of "Friday Night Lights" is its uncanny ability to take something that shouldn't really make a TV show -- regular people, butting up against life's major disappointments -- and squeeze stories and characters out of it that resonate beyond the dusty limits of Dillon County. We may have seen Riggins fall on his face drunk and Saracen grapple with his grandmother's health problems one too many times before, but there's always some fresh way of approaching a well-beaten path that these writers find for the show's best characters. Just look at Coach Taylor, with his team full of broken, inexperienced players, crestfallen over their limited chances at victory. There's no way this team will make it to a state championship, but somehow it's hard not to suspect that we'll get lots of moments straight out of the Little Football Player That Could movie "Rudy" -- former sidekick Landry (Jesse Plemons) finds his footing on the East Dillon team, former naysayers and screw-ups become big Coach Taylor fans, former criminal Vince (Michael B. Jordan -- yes, that's Wallace, the teenage drug dealer-turned-informant from the first season of "The Wire") transforms into a star running back before our eyes.

All of which probably sounds predictable if you've managed to miss the first three seasons of this fine drama (sure, even the much-maligned second season had its moments). But the writers of "Friday Night Lights," even when they're challenged with reimagining "Rudy," know how to make us believe in the heartbreaks and small victories these characters face. And after all these years, when Coach Taylor looks out over the heads of his new team of mediocre talents, outcasts and misfits, and whispers, "Clear eyes, full hearts, can't lose!" you'll still want to storm the field and prove him right.