"This Is It" is only the beginning 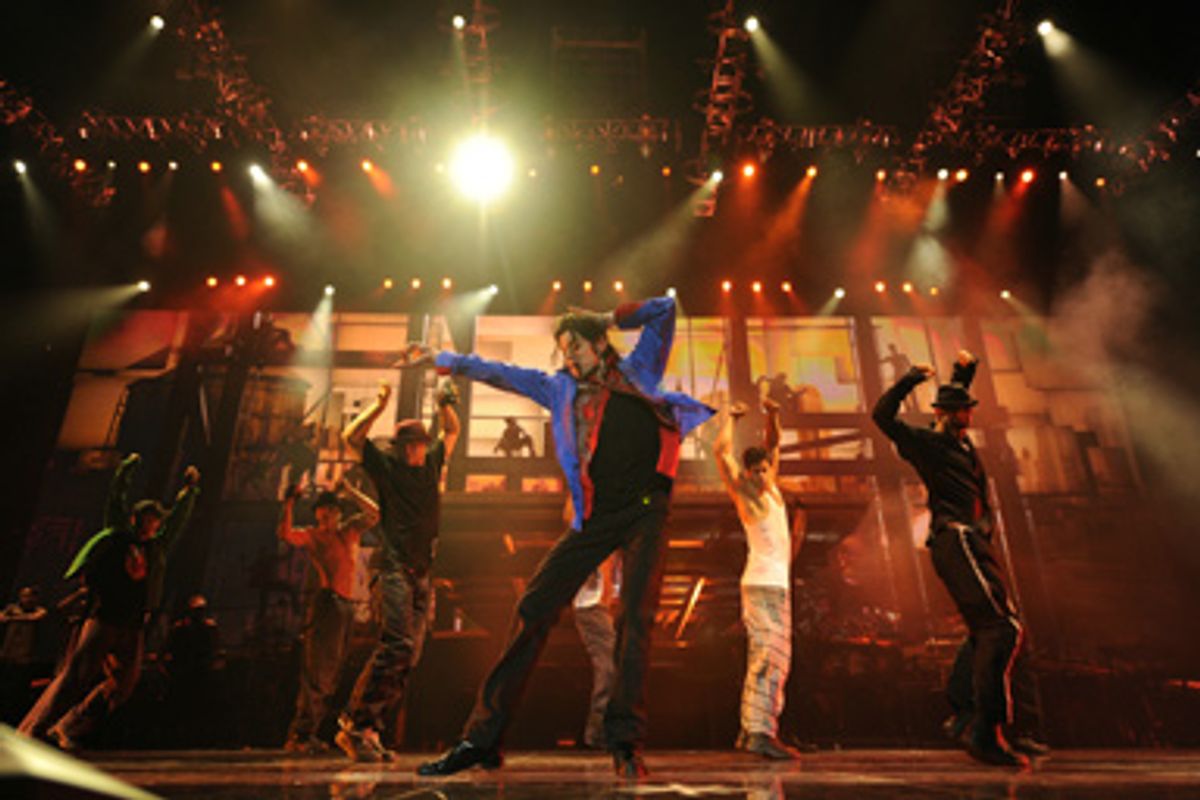 In the days and weeks after Michael Jackson's death last June, I was less surprised by the extensive public outpouring of grief over this sudden and painful pop-culture loss than I was by the surly presence of those who carped that the response was just "too much." The latter group seemed to consist largely but not exclusively of past-middle-aged white guys dressed in figurative, if not literal, Buffalo Springfield T-shirts. Jackson wasn't that great, or that important, they grumbled. Other camps also derided what they saw as the media's Jackson grief overkill, holding his death (an apple) up against, say, the war in Afghanistan (an obvious orange), before launching into a screed along the lines of "If the media spent even one-quarter as much time focusing on the important stories ..."

But Jackson's death itself -- not the media's subsequent coverage of the estate haggling or the custody hearings, or the endless parade of "insiders" talking to Larry King -- was an important story, albeit the kind of story whose importance grows, not recedes, as time passes. I say that because watching Kenny Ortega's would-be concert documentary "This Is It," a chronicle of the ambitious comeback concert Jackson was planning at the time of his death, I realized that I still don't know exactly what Jackson's death -- or, for that matter, his life -- means. Like Elvis Presley before him, Jackson was unknowable in life and even more mysterious after death. "This Is It" is a scrapbook of rehearsal footage, a small window into how this extraordinarily gifted and troubled man thought and worked. Watching it, I saw him from some new angles -- painful as well as celebratory -- and I realized that this isn't it: This, as with Elvis' posthumous career, is only the beginning.

Ortega, a longtime choreographer who'd worked with Jackson in designing his '90s tours, was deep in the process of rehearsing the "This Is It" tour when Jackson died. The footage Ortega has compiled here was originally intended for Jackson's personal archives, which makes it far more intimate than a strict, made-for-public-consumption "making of" documentary would be. The picture is a visual and aural sketchpad, alternately frustrating and enlightening, because we get enough of a sense of the scope of the spectacle Jackson had in mind; the spectacle itself can exist only in our imaginations. The concert would begin with the lowering of a giant "light man," a reflective robot on whose body would be projected snippets of 20th century greatness: a rocket blasting off, a close-up of the young Elizabeth Taylor (one of Jackson's closest friends, and a fellow icon).

You don't open a show that way if you have a tiny ego. And "This Is It" shows us an artist who knew exactly what he wanted: Jackson is polite to his backup dancers and singers and tries to help them when necessary. But mostly, he keeps himself at a remove, appreciative of their efforts but unwilling, or unable, to connect with them. We see him outlining the moves for "Wanna Be Startin' Somethin'": He glides and pops, dips and bobs, with gazelle-like grace. He's less elastic than he was in his youth, but what he's lost in rubberiness he's gained in elegance: Now, more than ever, it makes sense that Fred Astaire went out of his way to send kudos the first time he saw Jackson's moonwalk. And as Jackson dances, he roughs out the song's words, dropping lines here and there -- he needs to conserve his voice even as he's working out the moves. And so when he sings, "Too high to get over," we wait for the next line, knowing exactly what it is, though it never comes: Jackson must concentrate instead on the dancing, leaving an unfinished song in our heads.

"This Is It" is a documentary about process; in that respect, it has something in common with Jonathan Demme's marvelous Talking Heads concert film "Stop Making Sense," although it's far less perfectly formed -- by necessity, we have to fill in many of the blanks ourselves. It is also, largely, a movie about dance, and about what dancers say with their bodies that can't be said in words. That's most evident, and most heartbreaking, in the rehearsal footage for the Jackson 5-era "The Love You Save." Jackson isn't the same dancer he was at age 10, of course, but that dancer -- driven, disciplined but also joyous -- still lives inside him, which requires us to hold two disparate images in our heads at once: That of the adorable, amazing, exuberant kid that many of us, now in our 40s, grew up loving, and that of the strange, middle-aged stick-figure puppet man, with those too-fine, too-pale altered features.

The "Love You Save" segment is particularly rending because it's so wonderful, so exhilarating, to watch. But Jackson's relaxed determination in the making of that dance tells us something else: That as he aged his dancing, which in his boyhood may have been an outright expression of joy, became more about an idea of joy -- about the idea of his audience's pleasure as opposed to his own. That's not to say Jackson didn't take pleasure in dancing, in the way people who are good at what they do take pleasure in their work. But in between the lines of "This Is It" we can see Jackson as a man who couldn't afford to have a sense of humor about himself; perhaps he had to work at feeling even joy. At one point, as he's trying to convey to a sound engineer the kind of sound he wants, the engineer gently explains that he needs Jackson's help in achieving just the right sound, that Jackson needs to tell him if he wants "a little more booty in it." Jackson is so fixated on the work at hand that the technician's joke sails right by. Then it catches him, and he chuckles softly: "Heh heh -- that's funny," he says, as if he's explaining the gag to himself.

But Jackson was in no way just a humble little guy. There's a "Sshh -- genius at work!" quality to "This Is It," and for good reason. Not just anyone could survive being Michael Jackson -- not even, as we've seen, Michael Jackson. As just one example of his infinitely reflective hall-of-mirrors influence, consider this: For spring 2009, the extremely upscale French fashion house Balmain showed a collection of beautiful, sharp-shouldered, braid-decorated jackets clearly evocative of Jackson's trademark '80s style. Seeing Jackson in a similar jacket early in the film, I wondered if he'd ever bought one of the superelegant, superexpenpensive Balmain versions for himself. Sure enough, in later footage Jackson shows up wearing two different variations on Balmain's distinctive pagoda-shaped shoulder, a marvelous and playful example of the inspiration wrapped up in the inspired.

Michael Jackson belongs to everyone: to French high fashion; to the 20-something young woman I overheard in my neighborhood the day after his death, saying to her friend, "I just can't believe he's gone," as if she were speaking of a family member; even to the Buffalo Springfield guys, though they claim to have no use for him. In the years to come, people -- fans, music critics, naysayers -- will continue to debate what Michael Jackson really means, and who he really was. We'll never really know, and even this revelatory, moving documentary is just an evanescent record. Jackson's mystery deepens, even as it dissolves between our fingers.

Michael Jackson Movies This Is It