"The House of the Devil": Creepy, stylish fun 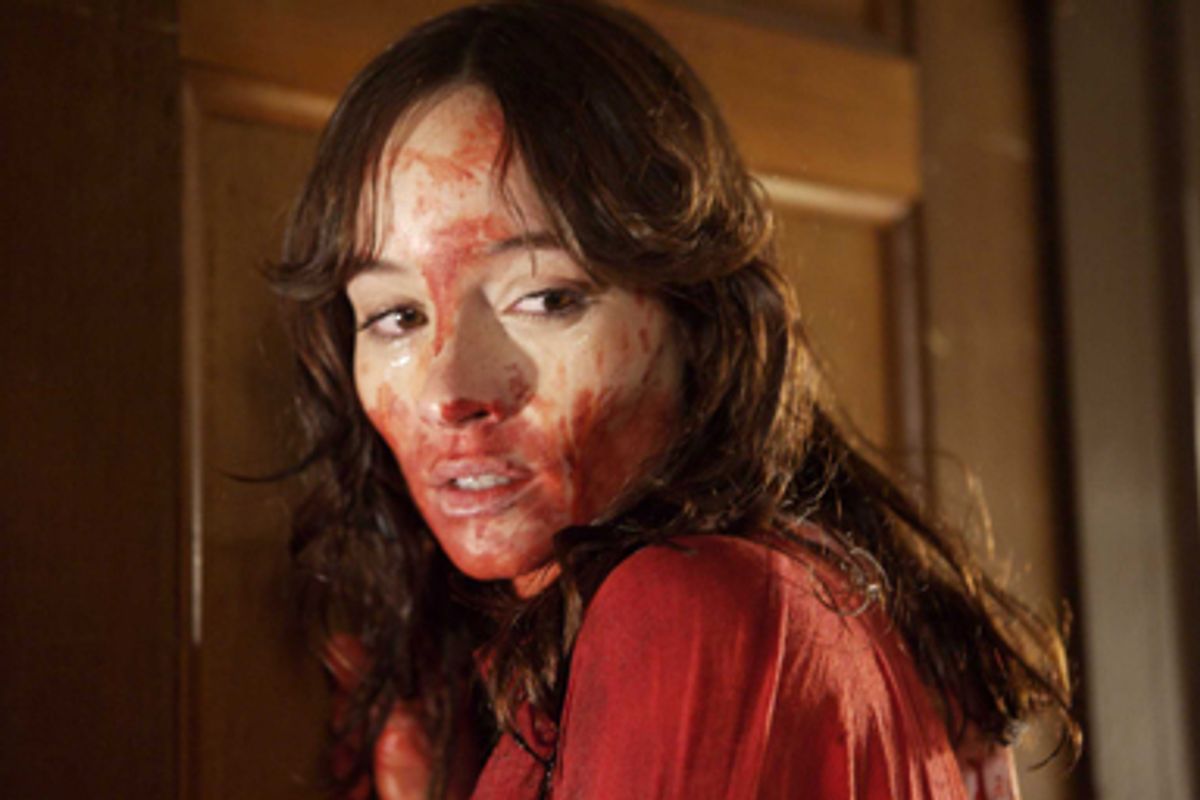 You don't need to have seen Ti West's '80s-horror homage "The House of the Devil" to compile your own list of Halloween don'ts: Don't go in the house, but if you do, don't answer the phone, don't look in the basement and don't go in the attic. Don't go to sleep. There's a watcher in the woods, and he knows you're alone.

But you're not going to listen, are you? The allure of horror films -- and the idea blinking at us, like a big, yellow, bloodshot eye, from the bowels of "The House of the Devil" -- is that not only do we want to have the bejesus scared out of us, but we're always happy to revisit the conceits that have scared us silly in the past. The shadowy Victorian house with a million secrets, the mask-wearing, mouth-breathing serial killer, the hungry zombie troupe groping blindly in search of their next meal, the devil worshipers in need of a nubile sacrifice: Those devices never get old, although in the rush to reinvent them, too many contemporary horror filmmakers have just reframed them in overly sadistic terms.

"The House of the Devil" isn't sadistic -- it's too affectionate for that. Sam (Jocelin Donahue), a pretty young college student -- make that coed -- needs extra money. So she pulls a tab off a paper flier posted near her dorm. It says nothing more than "BABY $ITTER WANTED." After arranging the details with a creepy-sounding guy on the phone, she's driven out to the family's remote house by her best friend, Megan (a dry and funny Greta Gerwig), who senses something amiss and urges her not to take the job. But Sam persists: Her prospective employers, Mr. and Mrs. Ulman, just need a "reliable" girl to look after Mrs. Ulman's aged mother for the evening. And they'll pay her $400. How could that possibly be bad?

The Ulmans are played by Tom Noonan and Mary Woronov, my vote for fun couple of the year. Mr. Ulman, dressed in an undertaker-style suit and carrying a gold-headed cane, looks kind of normal, except -- yipes! -- it's Tom Noonan, who's really easy to recognize even when he's not wearing a cutoff pantyhose leg pulled down halfway over his face. Mrs. Ulman slinks down the stairs wrapped in a black fur, like a demented Mrs. Robinson stepping out for an evening in Hades. She perches next to Sam on the sofa and scrutinizes her, deeming her suitable for the job at hand and reaching out to stroke a strand of her hair. (Woronov is a veteran of the Warhol Factory and a cult actress known for pictures like "Eating Raoul" and, my personal favorite, "Hollywood Boulevard.")

"House of the Devil" is almost all windup, and when the action finally happens, it's somewhat disappointing: It's a little too Dario Argento, without Argento's wackadoo baroque visual style, to fit the overall vibe of the movie. But this is one of those cases where the ending is almost beside the point, an afterthought. The best part is getting there, and West (the cult-horror director behind "The Roost" and the upcoming "Cabin Fever 2: Spring Fever") takes a great deal of pleasure and care laying out specific '80s-era details without making them campy or overdone. Sam and Megan's hair flares out into perfect wings; their jeans hit somewhere around the waist, instead of halfway down to their hips; when Sam settles into the Ulmans' house for the evening and pulls out her Walkman, it appears to be about the size of a package of frozen peas. The film has a slightly grainy-looking texture, and features a rudimentary, generic-sounding synth score that may as well have been pumped out of a toothpaste tube.

But West presents all this with a straight face, and that's key: There are things in "House of the Devil" that will make you laugh (and at one point I jumped out of my seat and shouted at the screen -- gotcha!). But West isn't out to stoke our superiority over the past, to give us opportunities to giggle and point and say, "Look at those awful hairdos!" He seems to know that after a while those thrills wear thin. Instead, he uses all the standard filmmaking tricks -- moody lighting, oblique camera angles, a sudden cut that interrupts an otherwise lyrical passage -- to remind us of our own vulnerability at the movies. These are tricks we've seen over and over again, and yet we still want to fall for them. He uses the camera, not words, to make offhanded observations: Without spelling it out, he notes, for example, that pizza always looks terrible in the movies. "The House of the Devil" is a clever picture, and something of a novelty -- it's not going to change the face or direction of horror filmmaking in any drastic way. But it's fun to watch something that's so obviously made with love. "The House of the Devil" is really a romance: a love letter to the kind of gal we thought had given up the ghost.

House Of The Devil Movies