Peter Straub on how to scare readers 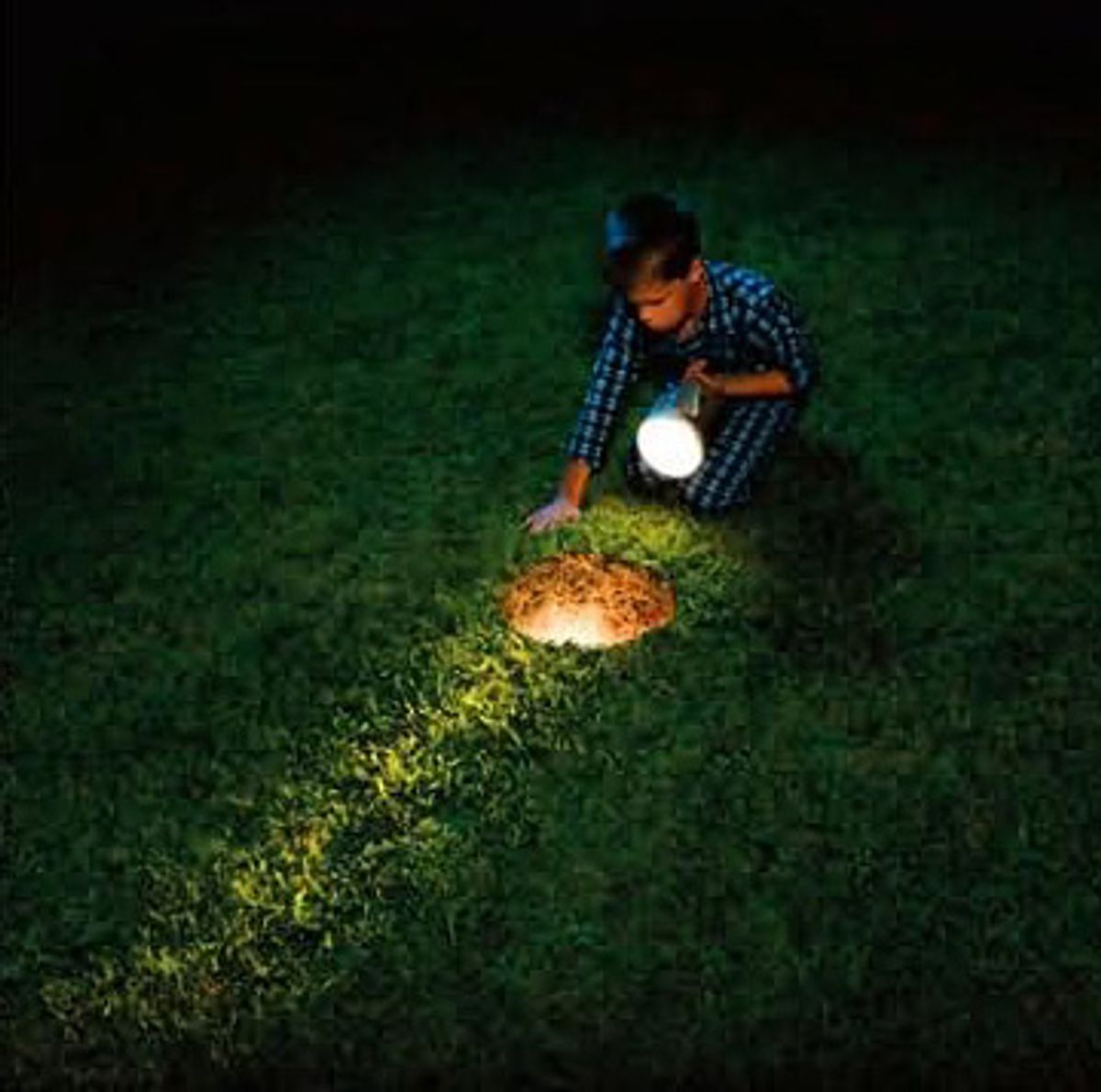 Detail from "American Fantastic Tales: Terror and the Uncanny"
--

Peter Straub has a lot of alter egos. There's Tim Underhill, a bestselling, jazz-loving novelist born in the Midwestern town of Millhaven (fictional counterpart to Straub's own hometown of Milwaukee), who lives in haunted solitude in a loft in Manhattan's East Village. Then there's the late, not-so-great professor Putney Tyson Ridge, the man Straub might have been if he'd gotten stuck in academia instead of writing such canonical contemporary horror fiction as "Ghost Story" and "Koko" as well as collaborating with Stephen King on "The Talisman" and "The Black House." The latest of Straub's personae is Pete Braust (do the anagram), a blind retired police detective who has appeared occasionally, played by Straub, on ABC's daytime soap "One Life to Live."

What's a little puzzling about these avatars is that being Peter Straub seems pretty darn sweet all on its own. A modest, eminently amiable bear of a man, Straub lives on the Upper West Side with Susan, his wife of 43 years, in a five-story brownstone stuffed with books, art, photographs and the biggest collection of jazz LPs and CDs you're likely to see outside a library or radio station. Tucked into every nook of the place is some memento of an interesting experience, literary passion or brilliant friend, from a set of Raymond Chandler first editions (gifts from Otto Penzler) to a framed photo of Straub and King on the day they decided to collaborate on "The Talisman" to the Boorum & Pease notebooks in which Straub wrote "Lost Boy Lost Girl," "In the Night Room" and other novels -- each decorated with an enigmatic collage reflecting the book's themes. There are awards on the mantel, Palomino pencils on the desk, stacks of poetry volumes by C.P. Cavafy and C.D. Wright in the study, Paul Desmond on the stereo and a sleek, friendly tabby named Hector on the living room sofa. When people fantasize about "being a writer," chances are the life they're imagining looks a lot like Peter Straub's.

Straub's literary specialty, however, is not dreams but nightmares; many people name "Ghost Story" as the scariest book they've ever read. He's particularly adept at the kind of creepy psychological yarn pioneered by Henry James and modernized by Shirley Jackson, two of Straub's writerly touchstones. That's the taste Straub has brought to bear on his latest project, editing the two-volume anthology "American Fantastic Tales: Terror and the Uncanny," just published by Library of America. (Straub also edited the LOA's H.P. Lovecraft collection.) The project has given him a century-spanning perspective on the art of making readers squirm uneasily in their chairs.

Most of the stories you include in this anthology don't involve a tremendous amount of violence.

No, that's less interesting to me. A lot of books on the horror shelves now, for example, are totally exterior. Take Thomas Harris' Hannibal Lecter novels. The one I like best is [the first book] "Red Dragon," because it's more interior, and shows you more of what's going on inside someone like that. It's more complex, more nuanced.

A few years back I guest-edited an issue of the literary journal Conjunctions, focusing on what we called the New Wave Fabulists. And I realized that most of the stories people sent me had to do with loss and grief. To me those are the defining emotions of the genre of horror.

When I was working on that issue, I was excited by what Kelly Link, Dan Chaon and a lot of other writers were doing, a somehow unplaceable kind of story that wasn't mainstream, wasn't realistic exactly, that had a fantastic tone like science fiction or fantasy but it wasn't any of those things. It was out there by itself. I liked that definitions of genre that I'd grown up with as a young man seemed to be dissolving. And this is purely pretentious, but I thought I'd done something to help that along. Dan Chaon sent me a high school photo of himself reading "Ghost Story." Take a writer like Brian Evenson, whose work is very serious and smart, with a high literary quality, but definitely, it's horror.

Did you learn any new secrets about scaring readers from going through so many stories for this new anthology?

I'm not sure I can explain exactly how it works. It has to do with creating believable people for whom the reader can feel affection, then putting them in danger of the unnameable and unseen. And it has to be suspended. You can't just pull a gun out and have them get shot. You have to allow the sense of underlying unease to intensify over time. As crucial as fear is dread. Dread is essential.

How would you distinguish the two?

Well, dread leads to fear, to shame and to terror. And before dread comes foreboding.

A prescience that something bad is about to happen. You don't know why you don't like that guy, but you just have a bad feeling about him. Dread is when foreboding shows itself to be justified. Something like foreboding is built into all fiction, I think. Even Barbara Pym novels have a point where you think, "Is that altar cloth going to work or not?"

In your novel "Lost Boy Lost Girl," there's a serial killer antagonist, but there's also this other story line about Tim Underhill's desire to rescue the nephew he loves so much from his own brother, who's just crushing the kid's spirit. In its own way, Tim's powerlessness to save that child is as horrifying as the killer's power to hurt him. The way you weave the fantastic threat in with that realistic emotional dimension makes the book especially devastating. The exterior action mirrors this complex interior danger. It emerges from the psychology of the characters, in a way.

I hope so. For Underhill, of course, all of this started with his Vietnam experience. He had post-traumatic stress disorder. I never had that, but I had its little brother [Straub was in a severe car accident at age 7], which is called adjustment reaction, according to my shrink.

Do you think that you have to have that kind history to write the sorts of things you write, or even to read them? I certainly know people who say, "I can't believe you want to read about such unpleasant stuff!"

I have no patience with people like that. They are deliberately not looking at something right in front of them that they should look at. In my novel "The Throat," Tim Underhill says, "The world is half night." You have to appreciate that, and if you do there is a kind of beauty to it all. There's nothing beautiful about violence and savagery, but there is in the human response, that we can feel ourselves deepened by unhappy things that happen to us. Grief is a very painful emotion because it depends on love. It's the price you pay for love. If you live to have actual experiences, you come face to face with real darkness.

Even the more surreal touches in your books do seem to feed back into very real anxieties. Tim Underhill meets a strangely hostile fan/collector in "In the Night Room," and this man tells him that when a book is published, every so often a copy comes off the presses that isn't the book the writer actually wrote but the book that he or she meant to write, sort of the platonic ideal of that book. There are people who collect just these copies, and of course they don't think much of authors because they know just how badly authors mess up their own ideas. Now that's a concept that strikes right at the heart of every writer's fears! You're face to face with this guy who knows what you should have been able to do and totally failed to do. So when you mentioned shame earlier as being part of the progress from foreboding to dread to fear, that really struck me.

It's definitely one of our most powerful, unpleasant emotions.

But shame implies responsibility. If your characters are just these blameless suburban innocents and then bam, something evil pounces on them, it's not the same.

Yes, and after a while I was only interested in the kind of story you're talking about. The external threat only seemed valid to me if there was some connection between the thing and the people perceiving the thing. It's a short hop from there to having everything being a projection from the psyches of the characters.

Do you find that ambiguity more scary?

Probably. Because you have to be really good to make the straightforward supernatural pay off. Stephen King can do it, but I've seen a hundred guys get only halfway there.

So that was the kind of story you were drawn to in putting this new anthology together?

Mostly, although there are some stories in there that are more straightforward. One story, "The Jelly-Fish," is pure pulp about a scientist who shrinks himself to microscopic size and gets eaten by an amoeba. That's just fun. Where I really used my taste is in the last half of the second volume, where story after story is grown-up, complex and surprising. And overall there's a preponderance of stories where everything is implied or ambiguous. It's less obvious and it's more literary.