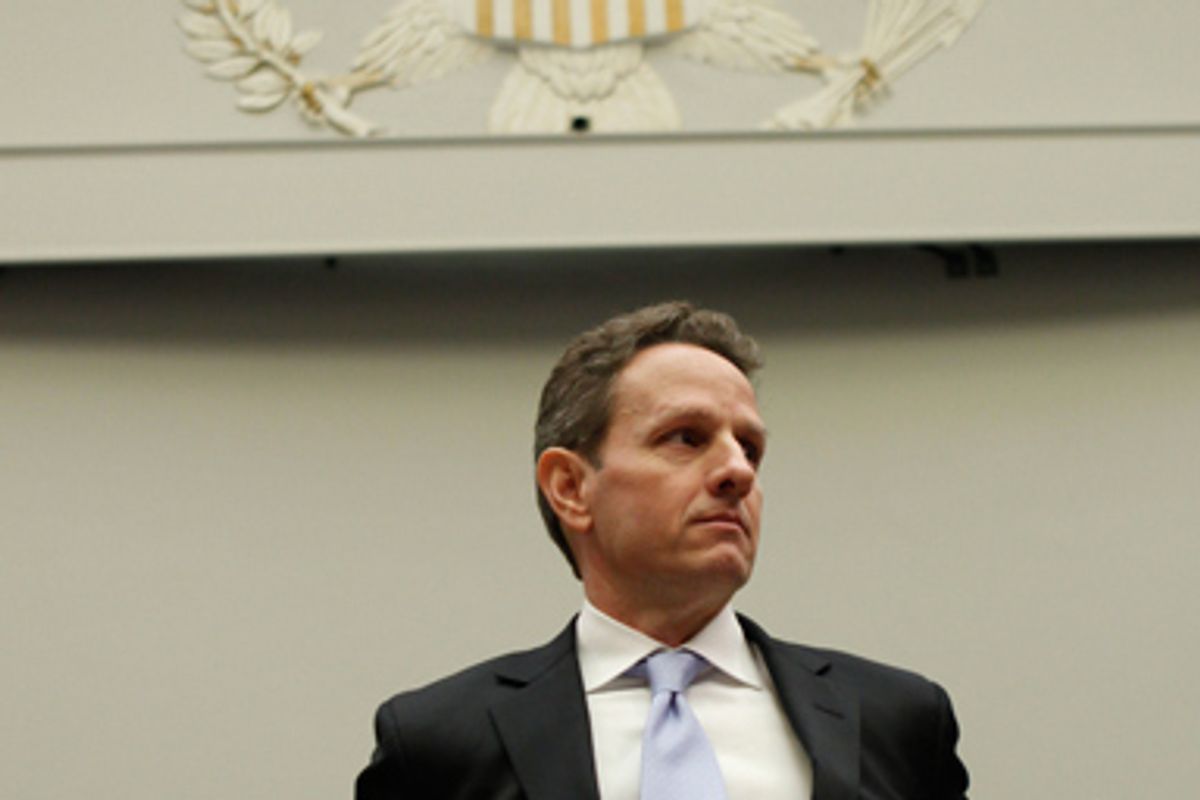 I recall that September day like it was yesterday -- the explosion so stunning, so memorable. It wasn't 9/11/01, it was 9/29/08 -- a moment when a rare blast of populist democracy briefly singed the economic terrorists who hold the Capitol hostage.

It had been a dark and stormy month of financial collapse, culminating in an attempted power grab. Pushed by his fellow Wall Street Ponzi schemers, Treasury Secretary Henry Paulson -- a former Goldman Sachs CEO -- was threatening Armageddon unless Congress ratified his pamphlet-size decree for a no-strings-attached bank bailout. The straightforward proposal, backed by President George W. Bush and President-to-be Barack Obama, would have turned Paulson into King Henry -- a despot allowed to autonomously dole out $700 billion to any of his business cronies.

This was too outrageous even for a rubber-stamp Congress that had long been ceding power to both the executive branch and the corporate boardroom. And so rank-and-file House Democrats and Republicans, backed by an angry public, overrode their leaders and voted down the measure.

Admittedly, the conflagration was brief. After a few days of industry lobbying, the House ultimately passed the Troubled Asset Relief Program bailout -- but one with at least some mild restrictions. For a time, 9/29’s fleeting blast of defiance appeared to establish a maximum limit to robbery and presidential authoritarianism.

Today, the episode -- if considered at all in Washington -- seems merely to have set minimum standards for chicanery. As evidenced by two little-noticed sections of the Obama administration's Wall Street "reform" bill, presidents and their bank benefactors are back to thinking they can pilfer whatever they want -- only now they have learned to camouflage their demands by burying them in the esoterica of lengthier bills.

Finding this latest giveaway means digging all the way down to Sections 1109 and 1604 of the White House's mammoth proposal. These passages look like typical legislative asterisks -- perfunctory "oh, by the ways" inserted by some overeager law school intern in the Treasury Department's basement as a matter of meaningless parliamentary etiquette.

They are anything but.

At a recent hearing, Rep. Brad Sherman, D-Calif., called the language "TARP on steroids," noting the provisions would deliberately let the executive branch enact even bigger, more unregulated bailouts than ever -- and by unilateral fiat.

Whereas the original TARP included some oversight language and power to limit Wall Street bonuses, TARP on steroids includes no specific oversight or executive pay constraints. Whereas TARP permitted the government to underwrite both small and large banks, TARP on steroids allows taxpayer cash to go only to the behemoths (which, not coincidentally, tend to make the biggest campaign contributions). And whereas TARP limited the Treasury secretary's check-writing authority to two years and $700 billion, TARP on steroids would let him spend as much as he wants for as long as he wants.

This last point is what poker players call "the tell" -- the inadvertent tip exposing a scam. Treasury Secretary Tim Geithner's tell came when he publicly said the Obama administration would oppose amendments limiting the new bailout power -- even if the limit was a $1 trillion cap.

The former financial executives inside the Obama administration have labeled their bill the "Financial Stability Improvement Act," and some might say that's like Bush officials oxymoronically calling their own anti-environment initiatives a "Clear Skies" agenda. But that's not a totally fair comparison because there’s an underlying consistency here: While these new "financial stability" powers may destabilize the nation's finances, they would more than stabilize Wall Street’s larcenous profits.

That thievery, of course, has been the big problem all along -- and now, only another 9/29 can prevent it from getting worse.