Which intergalactic attack is more harrowing: ABC's "V" or HBO's "Curb Your Enthusiasm"? 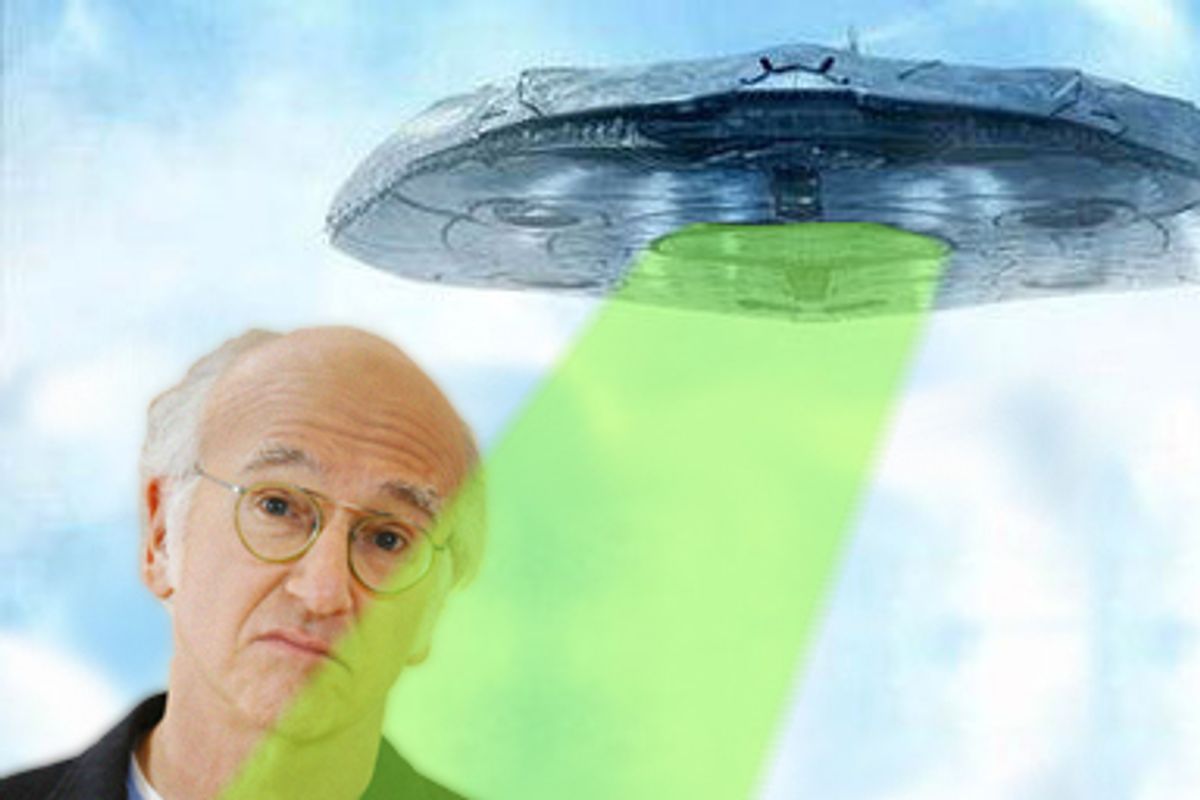 Aliens are so alienating. They're from planets in galaxies far, far away, for one thing. Most of us don't even like people from Nevada. And they're so smug about having figured out light-speed travel faster than we did. Who wants friends who make you feel bad about yourself all the time? I think poor, lonely George Clooney knows the answer to that one.

Besides, how rude is it to show up at someone's galactic doorstep without inviting them to your solar system first? Of course they say they're in desperate need of our valuable resources, because it sounds a lot better than admitting that once they mastered quantum physics and nanotechnology and the like, they got bored and decided to tool around the universe, looking for fun ways to fuck shit up.

In fact, their planet is actually a lot nicer and cleaner than ours, because they spent all their time making scientific and technological advances instead of poisoning their delicate ecosystem with carbon emissions and spray tans and "Two and a Half Men" reruns.

But don't confront them -- if decades of sci-fi movies have taught us anything, it's that aliens respond to direct confrontation by sucking our brains out of our ears. Just smile and say, "It was so nice of you to drop by! Please, take a few dozen silos of partially hydrogenated soybean oil when you go – we'll never finish them by ourselves."

We are of peace

With all of that preening and posturing and spreading terror throughout the universe that aliens do, it's incredible that they come from a world of serious scholars and scientists. Did they do all the hard work centuries ago, only to devolve into a land of idle troublemakers and slithering intergalactic playboys? This is why I'm all worked up over ABC's "V" (premieres 8 p.m. Tuesday, Nov. 3). Its aliens not only swoop down and hover over our major metropolises, scaring the living daylights out of us with their dulcet newscaster tones and their big, honest brown eyes, but they claim they can share the cure to some of our deadliest diseases, clean up our polluted planet, make our corn dogs taste better and keep outdoor malls from installing those hideous statues of ugly, badly dressed children frolicking happily in water fountains or taking up valuable bench space.

Hold on a minute. These aliens can cure cancer, but they can't hide their lizardy faces better than that? I've seen Nixon masks more convincing than the one that alien is wearing in the trailer. These visitors (as they call themselves) have been here for years, but we didn't even know about them? What have they been waiting for? Why didn't they just take over Oprah and control our minds through her a long time ago?

"They've been printing fake docs -- passports, IDs -- best fakes I've ever seen," says Erica Evans (Elizabeth Mitchell from "Lost") in a scene from the pilot (and featured in the trailer above). So the aliens want to cause "worldwide instability" in a secret plot aimed at the "extermination of every man, woman and child on the face of this Earth"… by printing fake IDs? Why don't they just suck all of our brains out of our ears right now and call it a day? Then tomorrow they can wake up, snort up several tons of crystal meth, and spend the afternoon at Disneyland without waiting in any lines.

But does anyone care if "V" is believable or not? No way. We just want these aliens to be a little bit different than the last imaginary aliens we met. We want that moment in the first episode where Anna (Morena Baccarin), the TV spokesmodel of the alien invaders, instructs news pretty boy Chad Decker (Scott Wolf) before an interview, "Just be sure not to ask anything that would paint us in a negative light." We want to relive that moment, which is creepy and suspenseful, over and over again.

What we don't want, and what we get, is talk of "building a resistance." Building a resistance is tiresome and pointless, it's ground that's been thoroughly trampled by "Invasion of the Body Snatchers" and "Terminator" and "Independence Day" and "Battlestar Galactica" and "Star Wars," and, hell, "Reds." Ragtag bands of grass-roots rebels gathering in secret warehouses to plan how to take down a much larger and more powerful foe? If Han Solo isn't getting called a scruffy-looking nerf herder, I want no part of it.

You've heard by now about "V's" unnerving tendency to borrow phrases from the Obama campaign to hint at the skin-deep emptiness of the aliens' catchphrases. And yes, like Obama, the "visitors" are fine-looking and poised and friendly and just too good to be true. They talk about the "V Ambassador Program" and other populist tricks to lure the masses into drinking their poisonous alien Kool-Aid. The show even premieres on the anniversary of President Obama's election, and ABC previously planned to skywrite big red Vs over the nation's major landmarks as a publicity stunt, all of which might lead to paranoid suspicions that ABC itself is run by sneaky but well-groomed aliens.

The original 1984 TV miniseries "V" concerned fascism, and we might just be willing to encounter these big, obvious parallels as some form of cultural commentary, if they were more intelligently laced into the series. Sure, it's a nice touch, having Erica's teenage son, Tyler (Logan Huffman), all starry-eyed over the hot alien babes with their unconditional positive regard and their promises that Tyler can finally be a part of something bigger and more exciting than the latest version of "Grand Theft Auto." Yes, they are frightfully fake and shiny, with their flashy ships and their relentlessly optimistic Scientology-speak. It's not hard to understand why Tyler or any teenager might find the Vs appealing, even if his scenes have all of the subtlety of a poorly scripted teen slasher flick. "Damn, she's hot!" Tyler gushes when Anna appears on TV. "I know, right?" replies his even-less-interesting friend.

Later, when the two kids board one of the aliens' transports for a tour of the mothership hovering above New York City, they gush to each other, "Dude, this is incredible, man! It's like an amusement park!" And who greets them at the door? A super-hot mega-babe alien with blond flat-ironed hair and a big lip-glossy mouth named Lisa. Hokey? Hokier than a chimpanzee dressed up as Wayne Newton.

Then Chad, the Matt Lauer of "V," asks Anna, "Is there such a thing as an ugly visitor?" Bwahaha! We get it. This whole three ring circus is supposed to be just like the Macy's Thanksgiving Day parade, only with oozing lizard people where the giant smiling Elmo float should be.

But as transfixing as it might be to witness how easily we yield our planetary panties to an alien suitor, as awful as it might be to grapple with a nefarious force that pretends it just dropped by to bring us vaccines and borrow a little uranium before it's on its merry way, "V" doesn't linger for very long in this provocative territory. By the end of the pilot, we're already flipping through the best fake IDs Evans has ever seen and attending secret resistance meetings where surprise-guest reptilian-faced demons are getting their Old Man McGregor masks ripped off, "Scooby Doo"-style. Suddenly this might as well be "Fringe" or "Warehouse 13" or "The X-Files" or "Eureka" or any one of hundreds of shows that involve FBI agents and international espionage and terrorist thugs and secret plots to take over the universe.

Come on, now. Isn't there a new way to handle the alien invasion story? Isn't there something a little more subtle and hauntingly evil out there than sneaky reptiles with really good publicists?

OK, there is Larry David of "Curb Your Enthusiasm" (10 p.m. Sundays on HBO). The writers' room of "Curb" may be the one place in Hollywood where they're determined to tackle the alien invasion plot in a brand new way.

You have to admire their patience, too. Instead of having Larry rip off his Larry David mask in the first few episodes of the show's seventh season, revealing a hideous, oozing lizard-faced alien underneath, they're making Larry act just like a nasty alien would, shaking and pointing and wrestling Rosie O'Donnell to the floor in the middle of a crowded restaurant.

If the writers of "Curb Your Enthusiasm" wanted the show to be funny, of course, they'd have gotten Jason Alexander into the mix from the start, because George Costanza was much funnier and more believable as Larry David than Larry David has ever been. George can ask rude questions and treat selfishness as a matter of principle and exalt his personal preferences to the status of widely held standards shared only by sane, thoughtful, right-thinking individuals, and it works, because Jason Alexander whispers and mumbles and states things matter-of-factly and, well, he's a great comedic actor.

Larry David, as oddly lovable as he is, is terrible at playing Larry David. He always looks nervous, like he's being watched. He shouts his way through every scene, and it's only gotten worse lately. Did you see last week's episode, where he pretended to be splashing himself every time he peed? He looked like he was wrestling an alligator.

And we're supposed to think it's hysterical and daring when Larry David rolls a handicapped woman into a closet and shuts the door? We're supposed to laugh uproariously as two women in wheelchairs chase Larry around a big house at a fancy party? We're supposed to chuckle when Larry confronts Christian Slater for hogging all the caviar at a party, a lame rehash of the classic "Seinfeld" episode where George is caught double-dipping his chip? We're expected to care that Larry doesn't like the sight of men in shorts? Obviously this isn't a comedy, not even close. Don't be so naive!

Clearly the lack of laughs doesn't come from the fact that "Curb Your Enthusiasm" is offensive. Far from it. If this show were a comedy -- which it's not -- it would be un-p.c. humor for very, very out of touch people who haven't noticed that all humor is un-p.c. now. Merely being un-p.c. by rolling out a steady flow of Katrina survivors and flabby-gutted assistants for Larry to insult is like building an entire show around a goofy dad, a meddling mother-in-law and a mom who always burns the pot roast. You could do it in 1985, but you can't do it now. It's like creating a drama series about building a secret resistance to fight off the invading aliens.

But if Larry David is an alien whose plan to exterminate every man, woman and child on the face of the earth involves insulting Chinese adoptees and handicapped women? Well, that's just brilliant.

I just can't wait until he rips off his mask! That is going to be so cool. What do you think he'll do first, eat Jerry Seinfeld's face off, or suck Julia Louis-Dreyfus' brains out of her ears?

Curb Your Enthusiasm I Like To Watch Television V Vampires