What happened to Master Sgt. Marion Grabe, says a source, is a clue "that there may be thousands of these problems" 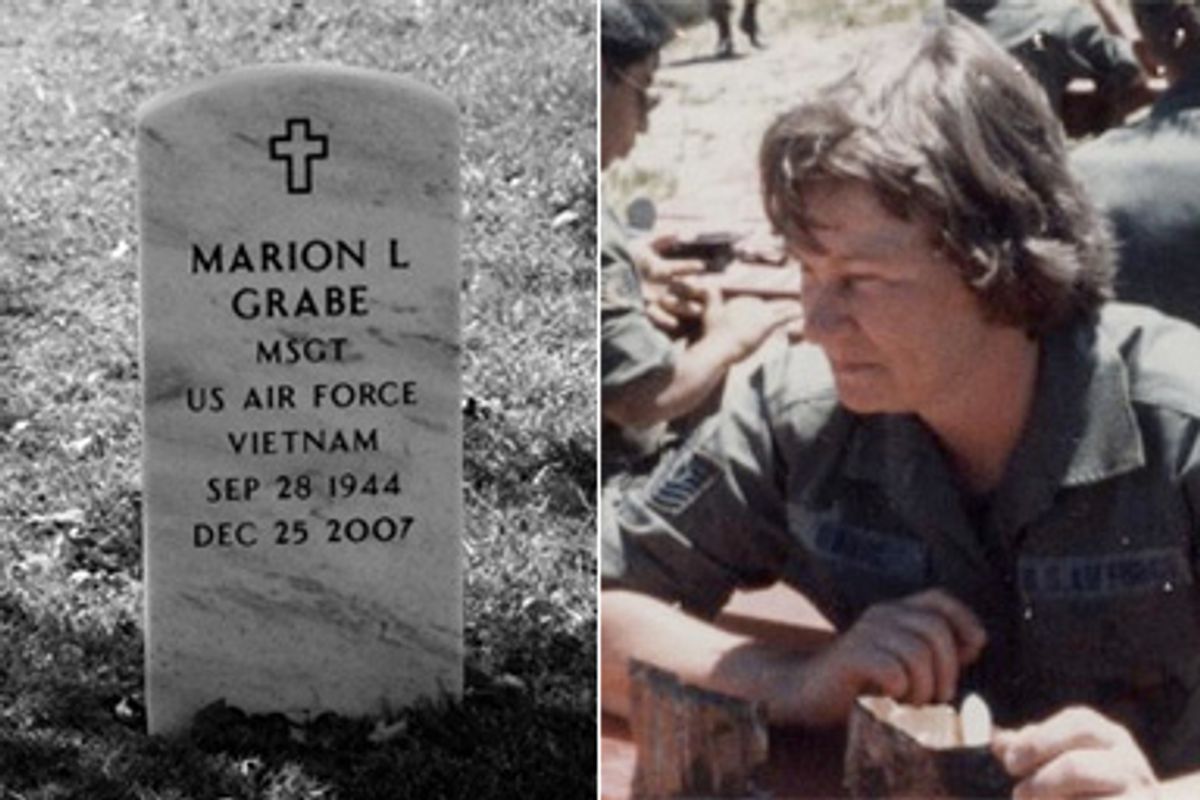 Air Force Master Sgt. Marion Grabe passed away on Christmas day in 2007. She had served 26 years as an operating room nurse in the Air Force she loved, including 17 months in a Manila hospital treating wounded soldiers during the Vietnam War.

In death, Grabe wanted to mark her service to her country with a suitably honorable burial at Arlington National Cemetery. "She wanted to be buried there so bad," recalled Grabe's sister, Dorothy Nolte. Thinking of the fiasco that ensued with Grabe's burial at Arlington, Nolte added sadly, "She deserved better."

On Jan. 28, 2008, the cemetery interred Grabe's cremated remains in the wrong plot, on top of the casket of another deceased service member. The Army then moved Grabe's remains without requesting permission from Nolte, her next of kin -- despite cemetery regulations urging efforts to obtain permission from family -- but later claimed to Salon that it had notified the next of kin. The official who moved Grabe without family approval is the same official who may bear primary responsibility for the poor record keeping at the cemetery, which has already resulted in at least one "unknown" grave, as previously documented by Salon, in a cemetery that is supposed to have no new "unknowns." And the mistake is part of a pattern of errors at the cemetery, where several current and former cemetery employees tell Salon there may be a large number of similarly misplaced remains.

Arlington has more than 300,000 graves. Some cemeteries of similar size began tracking grave locations and burials years ago via electronic records and satellites. Despite paying nearly $6 million over the past decade to a clutch of contractors with ties to cemetery managers to create a similar system, Arlington has almost nothing to show for the money. As a result, the cemetery still tries to track around 30 burials a day with paper records and more than 100 paper maps. Preventable mistakes occur, current and former cemetery staff say.

In Grabe's case, the cemetery buried her urn in Grave 2133 in Section 67, a stretch of grass on the southern edge of the cemetery near the Pentagon and, fittingly, with the shining, curving spears of the Air Force Memorial rising up into the sky in the background, just off the cemetery grounds. It would have been an apt resting place for the 63-year-old former nurse who enlisted in the Air Force in 1963.

In a paperwork foul-up, however, cemetery officials forgot that a staff sergeant named Doe had previously been buried in Grave 2133 of Section 67. (Doe is a pseudonym; Salon knows the individual's name but is choosing not to use it.) His casket was 7 feet down, and engineers did not even see it when Grabe's urn went in the same spot, buried under 3 feet of earth. The cemetery buried Grabe directly on top of the unrelated staff sergeant.

Arlington then placed Grabe's headstone above her remains, leaving Doe beneath her, unmarked. (It remains unclear what happened to Doe's headstone. Perhaps it never arrived at the cemetery in yet another foul-up.)

That's how it stayed for four months. It might have been like that forever, current and former cemetery staff say, just like many other mistakes. Most of the errors are invisible to the naked eye, buried beneath the straight lines of perfectly aligned headstones that imply a military precision to the burials at Arlington despite disarray under the ground.

Salon recently reported on another case where the cemetery went to bury someone, only to find unknown, unmarked remains already in the grave. The cemetery kept that quiet for six years, leaving those remains unmarked under just a patch of grass until Salon exposed it. The cemetery's solution was to place a stone marked "Unknown" on the grave -- effectively creating a new unknown soldier, in an era when DNA testing has made such a designation obsolete -- rather than dig up the grave to identify the occupant.

In Grabe's case, however, it was the relative of someone buried at Arlington who noticed a problem. On May 15, 2008, Staff Sgt. Doe's widow visited her husband's grave, 2133 in Section 67, but found Grabe's headstone there. In a panic, she visited the Arlington visitor center, where workers could not explain the situation. By the time she reached the cemetery's nearby administrative offices, the widow was in "full boil," according to one official familiar with the events of that day.

Cemetery and Army officials say they immediately dug up Grabe and moved her that day or the next, though this mistake, like others, has been kept quiet. This is the first time the error involving Grabe's remains has been made public.

The Army, which oversees Arlington, confirmed the account assembled by Salon. "In May of 2008, Arlington interment officials were alerted to a potential discrepancy -- what appeared to be a mismarked headstone," by a member of the staff sergeant's family, Army spokesman Dave Foster confirmed in a statement to Salon. "A study of the records and graves found that there was an unintended burial of cremated remains in that same plot," he wrote. "The situation, once discovered, was rectified immediately," he added. " Master Sgt. Grabe's cremated remains were relocated to a new grave, 2130-1 with family notification, and new headstones were ordered" for both graves, Foster said.

Foster claimed that despite the foul-up, the cemetery did the right thing: Officials moved Grabe, ordered new headstones, and the "family notification" meant that the officials alerted Nolte, Grabe's sister, of the error and the new location of her sister's remains. Nolte, after all, is Grabe's official next of kin.

"Wrong," Nolte told me in a telephone interview from her home in Burns, Tenn. Nolte is adamant that no one at the cemetery alerted her of the burial error or that her sister's remains had been dug up and moved. "There was no phone message. No mail. No e-mail. There was nothing," she explained. "Nobody notified us of anything like this."

The first Nolte heard of the cemetery moving her sister's remains, she says, was when Salon called her in mid-October. She maintains a file of all the material and correspondence from Arlington -- even an old, unused cemetery parking pass -- in a file in the house she has lived in for 13 years. Nolte's file still shows her sister buried in Grave 2133, where she was mistakenly placed above Staff Sgt. Doe.

Failure to alert Nolte isn't just insensitive; it's an apparent violation of cemetery policy, which requires the cemetery to "obtain family or representative permission, as the superintendent or deputy superintendent deem necessary or appropriate" before moving remains. It certainly would not have been difficult to ask Nolte. Salon found her with one phone call.

According to Foster, the Army spokesman, it was Higginbotham who learned about the Grabe error in May 2008. Higginbotham, Foster wrote, "undertook immediate corrective action" by moving Grabe and ordering new headstones. Foster says Higginbotham is also the cemetery official claiming that Nolte, Grabe's sister, was alerted when the cemetery moved Grabe's remains. "The deputy superintendent indicated that family notifications took place regarding this situation," Foster said.

The fact that Nolte is so adamant that she was never notified is not the only anomaly in this case. Foster says that while Higginbotham admitted he learned of the Grabe mix-up back in May 2008, Metzler told the Army he knew nothing about any of this until I alerted the cemetery and the Army on Oct. 23. "The Arlington Superintendent [John Metzler] indicated to us that he learned of the situation on Friday, October 23rd," Foster wrote.

That is odd, since Arlington's own regulations dictate that to move remains requires "the express, prior approval of the superintendent" -- meaning Metzler.

Those rules also require that within 10 days of moving remains, the superintendent must write up a memorandum describing the "specific reasons" for the move. Salon requested a copy of that memo last week. The Army says it is still looking for those documents. The rules also require that corrected copies of the new burial records be sent to the next of kin, in this case, Nolte.

Nolte, of course, says she never got those records. It is just more insult to injury, she says. "She spent 26 years in the Air Force that she loved so much," Nolte lamented about her sister. "My, oh, my. What a mess."

According to a cemetery source with intimate knowledge of Arlington's record-keeping problems, the mess is bigger than one misplaced master sergeant. " I hope you understand that the [Grabe] story," said the source, "while real, indicates that there may be thousands of these problems that they don't know about."

"What about the goof-ups that don't have a loved one who knows where to look and what to look for?"