Benedict wants to beef up the ranks of conservative Catholics. If that means bending the rules, no problem 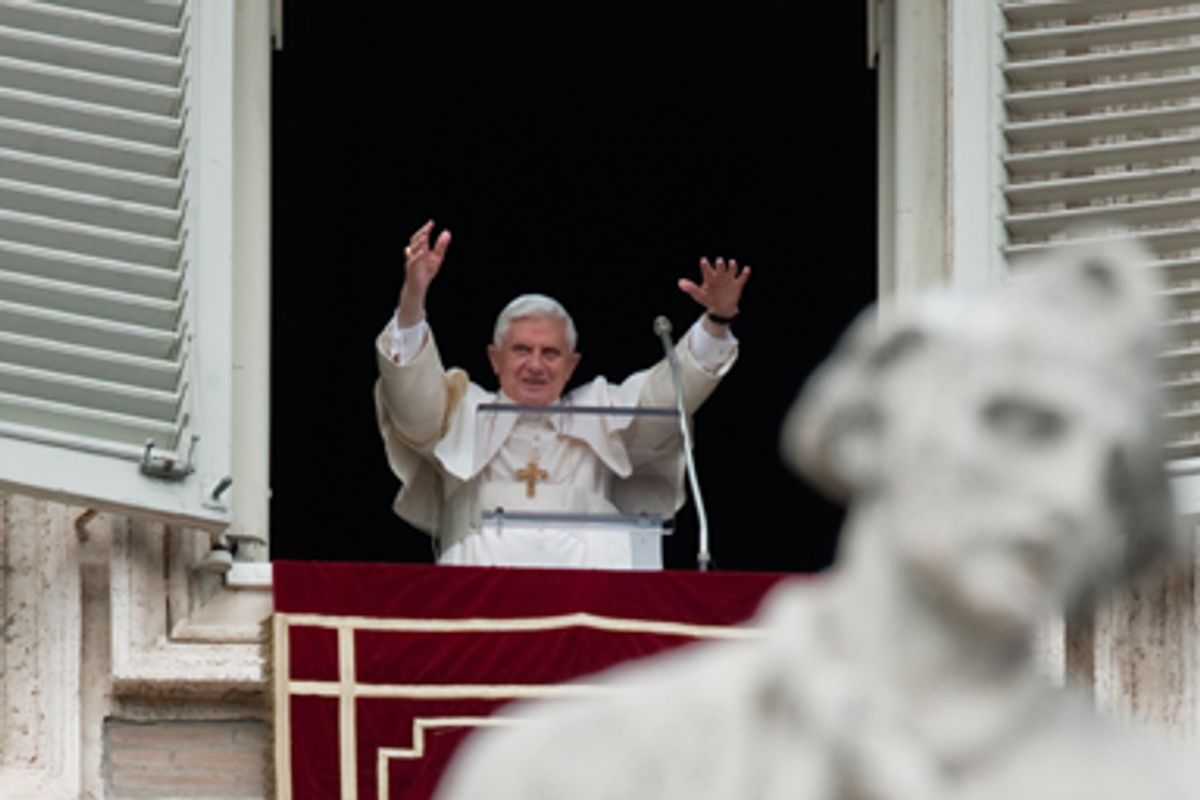 Pope Benedict XVI acknowledges faithful during the Angelus noon prayer celebrated from the window of his studio overlooking St. Peter's Square at the Vatican, Sunday, Oct. 18, 2009.
--

Pope Benedict XVI has made some Anglicans an offer he thinks they can't refuse. The pope has opened his arms to welcome, en masse, Anglican and Episcopalian priests, bishops and even whole congregations into full communion with the Catholic Church -- so long as they disagree with Anglican decisions to accept women priests and gay bishops. The Anglican priests and bishops can even bring their wives and kids with them.

In some ways this is nothing new. The U.S. Roman Catholic Church began reordaining married Episcopal priests in 1981. About 100 married Episcopal priests crossed over into Catholicism. At the time, news reports noted what seemed to be an injustice: Catholic priests who wanted to marry and have children needed to leave the priesthood while these ex-Episcopalians seemed to be getting a pass on the whole celibacy thing because of their conservative theological views. The ex-Episcopalians even had the right to get divorced and remain in the Catholic priesthood; in 1995, Father William Shields became the first married Roman Catholic priest to get divorced. His wife kept the five kids and in the divorce settlement it was agreed that the Roman Catholic Church did not have to pay any support for them.

But this latest gambit appears to be part of Benedict's larger attempt to increase Catholicism's market share without compromising on his version of theology. The invitation to the Anglicans, like Benedict's earlier outreach to the once shunned ultra-right Lefebvrists, seems designed to grow conservatism in the European Catholic Church by scooping up dissidents on the right. But the danger is that Benedict's push to pump up the church's numbers will alienate as many as it attracts. As some customers come in through the sanctuary, many others will be fleeing out the side door.

The head of a conservative Anglican group in Britain, the Right Rev. John Broadhurst, estimates about 1,000 Anglican priests in the U.K. are disaffected and if the COE goes ahead and ordains women as bishops others think the numbers might grow. For Benedict XVI, a German who has railed against European secularism and called on Europeans to return to their Christian roots, adding 1,000 or so new clergy, a few more conservative bishops and possibly a few whole congregations would be a shot in the arm. Increasing market share by getting consumers to switch brands is a tried and true corporate strategy. (The unhappy U.S. Episcopalians for whom the installation of Gene Robinson, an openly gay priest, as bishop was the last straw have already formed their own Anglican church in America. Meanwhile, African Anglicans are considerably more conservative than even Rome so they are likely to stay put.)

But just as with the church's latest mass-conversion offer a quarter-century ago, there are questions being raised about the pope's plan. At an Oct. 20 press conference the Vatican said more information would be released within several weeks, but some elements of the agreement were explained. There will be a new, unified international procedure that will permit mass conversions rather than a case-by-case evaluation of each potential convert. The new Anglican-Roman Catholic priests and bishops will have their own leaders and not be part of the normal diocesan structure. It is expected that these leaders will be former Anglican priests and they may oversee individual priests, whole congregations or even new dioceses composed entirely of converts.

So eager is the pope to add to his army that he has agreed to allow the Anglicans to keep their liturgical practices as well as their wives and children. What, one wonders, might they have to give up? Well, they do have to accept the pope. And, if they are bishops and married, they can no longer serve as bishops. Married Anglican priests will not be able to climb the corporate ladder and become bishops but perhaps they can divorce and then be bishops.

Not yet clear is what they will do about sex with their wives. It is anticipated that they will need to take the vow of chastity -- not celibacy, chastity. That means they can only have sex with their wives. In the early church, priests were married, but the ideal was for the priest and his wife to live like "brother and sister." Contraception is another matter. Anglicans can use it. Roman Catholics can't. If the crossover priests and bishops must follow Catholic rules on contraception, will the church be able to support all those kids? Parish priests don't take a vow of poverty, so perhaps we will find the crossover guys will be more demanding about pay scales or take second jobs -- or their wives will go out and get jobs.

And then there's the case of Florida's Father Cutie. Known in South Beach as Padre Oprah, Father Cutie left the Catholic priesthood earlier this year and became an Episcopal priest so he could marry the woman he loved. Can Father Cutie now come home again and be a Catholic married priest? What a slap in the face to the one in three Catholic priests who left the priesthood to marry and can't even get the pope to answer a letter or their local bishop to provide them with a pension for the years they were priests.

This week the pope meets with the Lefebvrists, those "traditionalists" who broke with Rome over the reforms of Vatican II and whom Benedict has been courting along with the homophobes and misogynists of the Anglican communion. It was just a few months ago that he lifted the excommunication of four of their bishops and then discovered that one was a Holocaust denier and the others part of a system that consistently issued anti-Semitic statements. It seems he thinks they are worthy of religious leadership.

The pope is, as usual, unconcerned about how the Catholic people will react to his willingness to open his heart to homophobes and misogynists and anti-Semites in the name of corporate survival. A few die-hard optimists who still think justice can emanate from Rome are making soothing sounds. Sister Christine Schenk, the executive director of Future Church, a Catholic group that favors married priests, thought the Vatican ploy was "very interesting and probably somewhat encouraging in the sense of, yes, there is flexibility, there is openness."

But for other Catholics a serious question has been raised about how long to stick it out. Mary Hunt, a Catholic feminist theologian not known for drinking the Kool-Aid, was blunt: "Let history record this theological scandal for what it is," she wrote in Religion Dispatches, "the joining of two camps united in their rejection of women and queer people as unworthy of religious leadership."

I personally am left asking at what point fighting to reform a corrupt system becomes the same as contributing to it. Bishop Martyn Minns, a leader of the dissident Anglicans in the U.S., rejected Rome's offer out of hand. "I don't want to be a Roman Catholic. There was a Reformation, you know." If you are Roman Catholic, like me, you are still waiting for the Reformation.