What Maine means for gay marriage in California

The Maine fight was supposed to be the dress rehearsal for repealing California's Prop. 8 -- but gay marriage lost 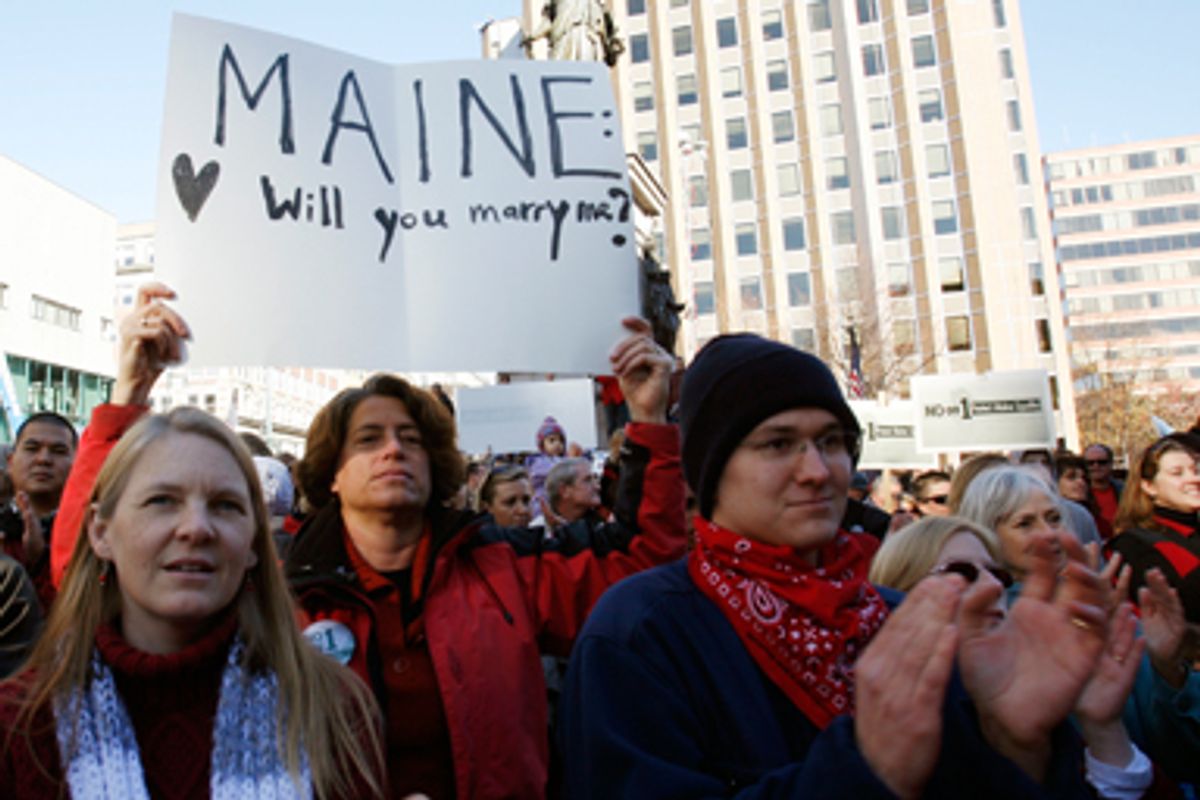 Supporters turn out for a gay-rights rally the day before election day in Portland, Maine, on Monday, Nov. 2, 2009.
--

Paul Hogarth remembers how angry he was when Proposition 8 passed in California. “I witnessed the train wreck,” he says. “I was angry with how we blew it.” When same sex marriage came under attack in Maine, Hogarth, a blogger for the Web site Beyond Chron, decided he had to do something to help.

Hogarth’s friend Jay Cash had started a program called Travel for Change during the Obama campaign where people could donate airline miles so volunteers could go to swing states. Hogarth also started Volunteer Vacation so out-of-towners could get free housing if they went to volunteer for a week in Maine. For people on the Northeast’s I-95 corridor who might want to come up for a weekend of walking the precincts, Hogarth put together Drive for Equality, a carpool program.

“We were applying the lessons of the Obama campaign,” says Hogarth as the polls closed in Biddeford, Maine. “The No on 8 campaign was a top-down Hillary Clinton-style campaign. This was more of a bottom-up Obama-style campaign.”

In California, activists are split over whether to take on same-sex marriage again in 2010 or 2012. Maine, for many, was the dress rehearsal. “Maine might be different from California but the National Organization for Marriage in Maine (which opposed same-sex marriage) waged a cookie cutter campaign,” says Rick Jacobs, chairman of the Courage Campaign, which is considering a push to repeal Proposition 8 in 2010. “They even used the same TV ad.”

Now marriage equality supporters are having to come to terms with another loss. Same-sex marriage in Maine was repealed 53 percent to 47 percent according to latest numbers.

In California, the fight against Proposition 8 had been led by Equality California. The organization, which had been heavily criticized by many in the LGBT rights community for how it handled the No on 8 campaign, had tried to be on the offensive in Maine. They had sent 11 field staff to Maine. They had run phone banks from California that had made over 60,000 calls. “People took a day off work to make those calls,” says Geoff Kors, executive director of Equality California. “A lot of people said they had wished they had done more against Prop. 8.”

“When something bad happens, and people’s rights are taken away, that’s when a movement is galvanized,” says Rick Jacobs of the Courage Campaign. Courage Campaign set up its own phone banks in the Bay Area in people’s houses. They had four full-time staff in Maine and 11 volunteers. “We did not budget for this,” says Jacobs. “The 11 volunteers raised their own money. We raised over $60,000 from members that went directly to the campaign.”

It was looking good. For the first time, the marriage equality folks were ahead in fundraising early in the campaign. Protect Maine Equality raised $4 million, compared with $2.5 million for Stand for Marriage Maine. Equality Maine had learned from the hits the No on 8 campaign had taken in California. When the first ads about schoolchildren learning about gay marriage showed up in Maine, they were ready with a counter ad featuring Maine’s teacher of the year.

Now with Maine voters having struck down same-sex marriage, activists in California are wondering what lessons to take back home. John Bare, a San Francisco resident who is part of a donor circle that gives money to marriage equality campaigns nationwide, cautions against reading too much into the today-Maine, tomorrow-California theories.

“Maine is in no way scalable up to California,” says Bare. “Maine is French Catholic, white, middle- and upper-class.” It also has the population of the size of San Diego. When marriage equality campaigners wanted to target their message to a precise demographic they found a French Catholic grandmother and her gay son and his longtime partner. “In California we need messages for Latino immigrants and Cantonese immigrants,” says Bare. “We need more tailoring than we could afford.”

Paul Hogarth agrees. “In California there was a serious problem with outreach to communities of color. Whatever happens in Maine, we will still have that problem in California. And a lot of liberal, progressive groups are not good at reaching these communities,” he says.

But he is optimistic that some good will come out of Maine. “The campaign learned how to listen to the grass roots. It reached out to people outside the gay havens. They did not let the opposition own the religion issue. Or the children issue.”

He says, unlike in California in 2008, he at least feels he did everything he could to save same-sex marriage in Maine.

Bare worries that the loss in Maine, coupled with the recent resignation of the chairs of the National Equality March, will be a double blow for the movement. “I think the energy might go out of many who want to go to the ballot in 2010,” says Bare.

The Courage Campaign is still studying the results of a massive survey of the state’s voters to see if it makes sense to launch a push for marriage equality in 2010, says Jacobs.

But Kors of Equality California says despite putting the best face on it, “losing is always devastating. Never before has a majority voted on a minority’s right. It’s time for that to end.”