The Keyboard Commandos want Obama to be tough

Dick Cheney, David Brooks and others urge the president to man up. Why is foreign policy always about machismo? 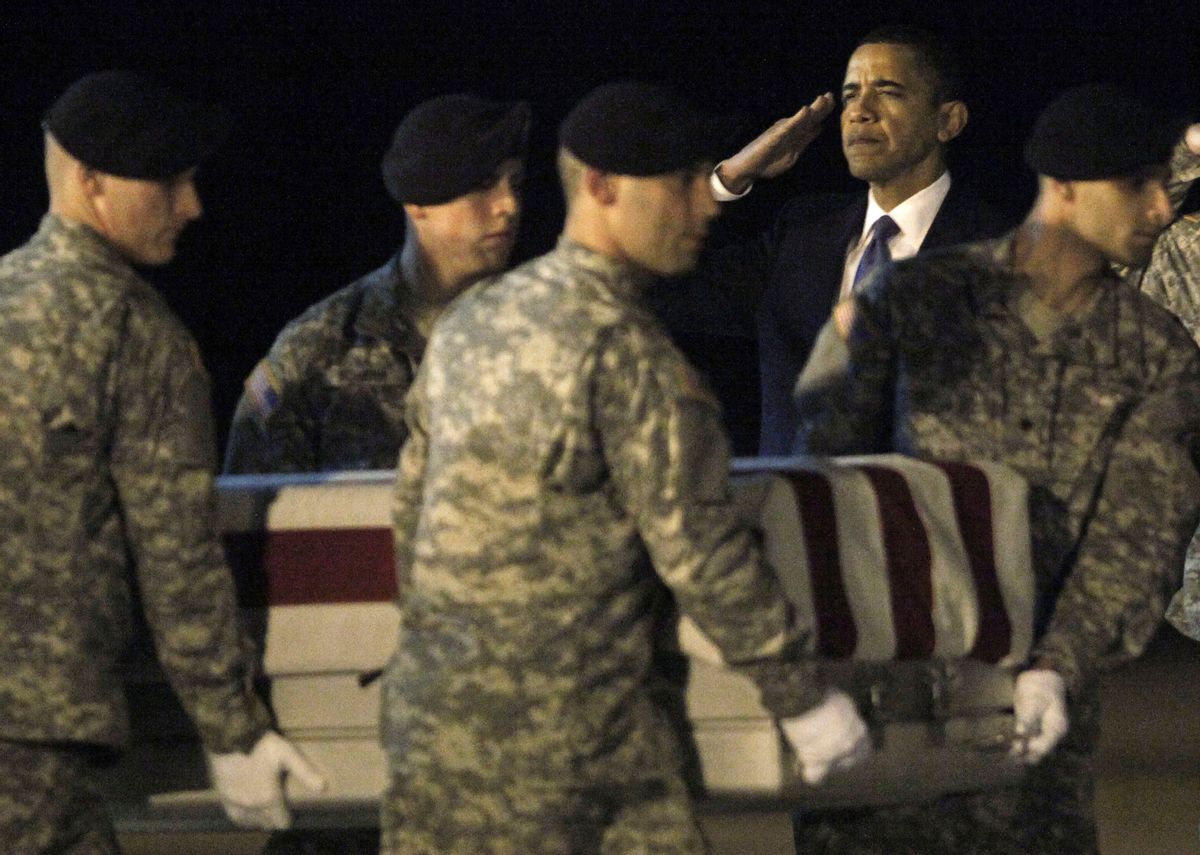 "All that we have to do is to send two mujahedeen to the furthest point east to raise a piece of cloth on which is written 'al-Qaida' in order to make generals race there, and we cause America to suffer human, economic and political losses -- without their achieving anything of note!" -- Osama bin Laden, November 2004

One sign of a movement that's lost touch with reality is its preference for political melodrama. Out on the ragged edges of America's misconceived "war on terror," events in Afghanistan daily dramatize the awful situation confronting President Obama. He appears to have no good options. To be sure, Obama invited trouble, telling an audience at a VFW convention last August, "This is not a war of choice. This is a war of necessity."

Obama may not then have understood how bad things were in that remote corner of Asia historically designated "the graveyard of empires," nor his Washington foes' willingness to put party over country for short-term political advantage. Any doubts ought to have been resolved by the recent contributions of the Cheneys, father and daughter.

First came former Vice President Dick Cheney, architect of today's failing policy. To "Big Time," everything boils down, as everything always does, to a question of toughness. "The White House," he announced, "must stop dithering while America's armed forces are in danger." Coming from a guy who spent eight years in a hidden bunker, it's remarkable hearing a White House policy review described as "waffling."

On cue, Washington's influential corps of Keyboard Commandos demanded a quick end to strategic thinking. Charles Krauthammer, David Brooks, Max Boot, the lot of them, remind one of nothing so much as the hairy-chested pirates aboard the good ship "Raging Queen" in the old "Saturday Night Live" skit -- sailing with John Belushi's "Captain Ned."

To Brooks, the big question is whether Obama possesses "the trait that is more important than intellectual sophistication and, in fact, stands in tension with it." That is, whether the president is "a very manly, virile, manful person, and a firm believer in strict discipline, corporal punishment, and nude apartment wrestling."

Oops, never mind. That last bit was Captain Ned. But it does get old hearing this cohort of Ivy League toughs -- most of whom one suspects haven't had even a fistfight since third grade -- describe every U.S. foreign policy issue as a testosterone test. One suspects it may not be Obama's virility they're worried about.

Next came Cheney's devoted daughter. After President Obama paid a 4 a.m. visit to Dover Air Force Base in Delaware to salute the flag-draped caskets of 18 American servicemen arriving home from Afghanistan, and to console their families, Liz Cheney appeared on -- where else? -- Fox News radio to suggest a cheap political stunt.

"I think that what President Bush used to do is do it without the cameras," Cheney said. "And I don't understand sort of showing up with the White House Press Pool with photographers and asking family members if you can take pictures."

In reality, Bush never went there at all; nor did Vice President Cheney. The Bush administration even forbade the news media to photograph arriving coffins, a ban President Obama lifted. President Bush did visit with several families of Iraq and Afghan war dead. Yes, the cameras rolled.

One needn't doubt either president's sincerity to observe that if a Democrat had made so obscene a suggestion, Fox News, Rush Limbaugh, Newt Gingrich and half the nation's Professional Patriots would have pitched a hissy fit. Instead, Limbaugh said that "leftists are propagandists, they live by photo op."

The Obama White House allowed the incident to speak for itself.

Prayerfully, the Dover visit drove home to Obama the gravity of the choices facing him. One hopes the opportunism of his opponents wasn't lost upon the president either. Whoever leaked Gen. Stanley McChrystal's report about the deteriorating situation in Afghanistan to the Washington Post's Bob Woodward -- likely a high-level Pentagon official -- did so precisely to force the president's hand.

Just as whoever provided the New York Times the leads to its well-sourced article identifying Ahmed Wali Karzai, brother of the recently crowned ... um ... recently elected, Afghan president, as both a major opium smuggler and the recipient of eight years' worth of CIA cash payments -- not to mention as the forger of millions of fraudulent Afghan presidential ballots -- no doubt sought to underscore the dreadful mess Obama inherited.

Meanwhile, the last thing anybody's allowed to suggest is any kind of rational cost/benefit analysis. How many lives and how many billions of dollars can the United States and its allies sanely expend in a futile quest to occupy every blank spot on the world map where al-Qaida might raise a flag? The 9/11 atrocity, let's recall, was planned mainly in Germany and Florida, and the 7/7 London subway bombings in Yorkshire.