Rihanna is all kinds of "fearless"

In her first media push since being assaulted, the R&B singer is both wholesome role model and butt-kicking vixen 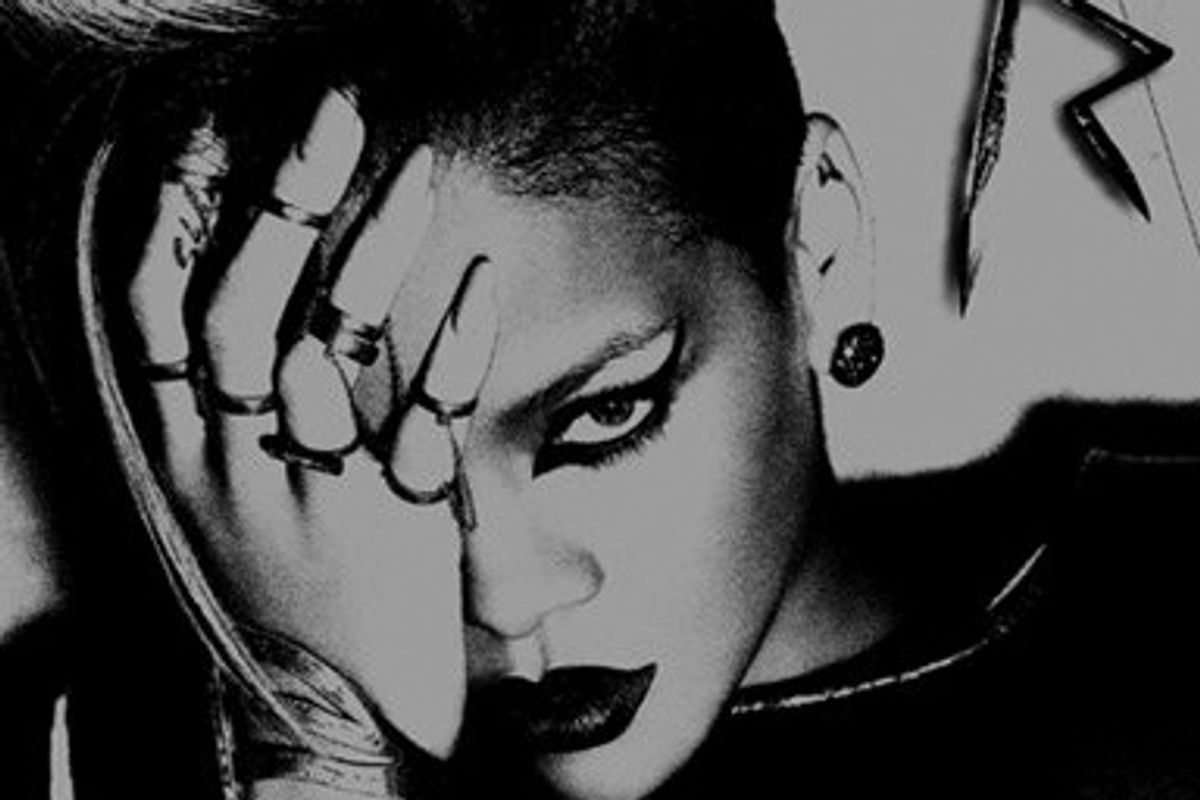 The Rihanna media blitz is in full effect this week, thanks to two upcoming, much-anticipated premieres. On Friday, both the pop princess' first interview since she was assaulted by ex-boyfriend Chris Brown and the music video for the controversial first single from her upcoming album "Rated R" will be released. Just earlier this week, the music video for a different single dropped. In all this publicity, one thing stands out: There are two dramatically different sides of Rihanna on display.

ABC is milking all that it can from Diane Sawyer's exclusive one-on-one with Rihanna, which previews Thursday on "Good Morning America" and plays in full Friday on "20/20." In the promo for the interview, Rihanna looks like she's dressed for a visit to grandma's house: She wears a white turtleneck and appears fresh-faced and rosy-cheeked. ABC shares a quote from the interview with the songstress: "I want to give as much insight as I can to young women, because I feel like I represent a voice that really isn't heard," she said. "Now I can help speak for those women."

On a similarly wholesome note: She's being honored as one of Glamour magazine's women of the year and is featured on one of the handful of different covers for the December issue looking like she's bubbling over with joy. In an online preview of the magazine's interview with her, she reveals the vulnerability she felt after the police photo of her injuries was leaked: "It was humiliating; that is not a photo you would show to anybody. I felt completely taken advantage of. I felt like people were making it into a fun topic on the Internet, and it’s my life."

But a different, darker side of Rihanna -- one that refuses any sign of weakness -- is on display in her new music. On Tuesday, the music video for "Wait is Ova" (see below) premiered and, hot damn, she looks bad-ass. The gritty black-and-white video was filmed in Washington Heights, New York and shows Rihanna swaggering toward the camera, tossing her hands in the air and giving a stare that dares the viewer to try -- you just try -- messing with her.  She wears a black eye patch, a Mohawk-like bouffant and thigh-high boots with stockings. Sexy and impractical as it sounds, it actually makes her look like a fearsome superheroine -- or villainess.

It gets even better. At one point in the video, there's a close-up of her grabbing her crotch while singing the lyrics: "I'm such a fucking lady." Translation: I pity the fool who thinks I'm just a little lady. Like Ciara's "Like a Boy," it flirts with the idea of sexy, feminine fortitude. As a friend e-mailed me after watching it: "Somebody hold me, because I'm scared." Me too, and I'm absolutely loving it.

This video comes on the heels of the release of "Russian Roulette," the first single off her upcoming album which features a cover image of a topless Rihanna wrapped in barbed wire. It's already inspired plenty of debate over whether it defends abusive relationships -- and what influence that might have on her young female fans. A sample of the lyrics:

The song ends with a gunshot. It's an undeniably disturbing single; the lyrics, which weren't written by Rihanna, revel in the twisted and tragic romance of an abusive relationship. It brings us to a very dark and uncomfortable place, but it also seems an honest reflection of the dynamics of domestic violence. The video for the song drops during ABC's primetime interview this Friday -- so, brace yourselves for the response.

It's inevitable that every song and video released by Rihanna in the near future will be subject to a critical exegesis. She's been elected the new poster-child for domestic violence and, as such, is expected to deliver the appropriate public service announcement -- but let's not forget that it's her experience. She owns it; not us. As she told Glamour: "Even if people don’t love [the album], I made exactly the piece of art that I wanted to make. It’s super fearless -- which is exactly how I feel right now. I am in a really good place."

Hopefully we can allow her to be both the wholesome, soft-spoken Rihanna and the cocky crooner with a gun tattoo and gangster swagger.